Within the player projections software we have a column for player notes where I post a some of the technical indicators that influence our 2009 projections, here's the latest round of analytic notes as we kick off the 2009 campaign.

For those not Sabermetric in nature, when I start the Preseason Player Projection notes in late February these notes will have less of a quantitative focus. At that point we start focusing on the qualitative vibes that come out of the various camps as we hone in on our 2009 player projections.

In no specific order, here we go:

Smoltz, John Top 15 pitcher if healthy. We'll be keeping tabs this spring, could be a steal after the 10th round.
Dempster, Ryan Slight dropoff expected. Runners Stranded rate of .77 improved his overall numbers.
Halladay, Roy Career Year in '08, slight drop expected. Won +3 more than deserved
Meche, Gil Rarely goes past 7 innings, yet solid. Rarely has a disaster start. Decent middle round selection.
Burnett, A.J. Last season was 1st season in last 3 that he was healthy. Wins overstated in '08 by 4. QS% only 56% in '08
Beckett, Josh Bounce back season expected, Expected ERA was .38 points less than expected. Durability lowers expectation
Santana, Johan Expected Wins of 21 (+5) in '08, 1.08 WHIP/2.09 ERA in 2H of '08
Sabathia, CC Career Season in '08, ERA was .23 lower than expected, Stranded % was 5% better than norm
Sheets, Ben Top end pitcher when healthy, seems to crash every season in the 2nd half. Could miss '09 w/ elbow surgery
Duchscherer, Justin Unsustainable Runners Stranded Rate in '08 of .78 for a .70 K/I pitcher, Rise in ERA and WHIP highly probable.
Peavy, Jake 12% drop in K ratio is a bit of a concern. A move out of SD would hurt. Consider his .263/.429 home/away Slug Split.
Harang, Aaron Had poor '08 campaign, but deserved +6 wins over actual. Several poor outings destroyed overall numbers
Lackey, John A healthy tricep should bring Lackey back into the top 20 possibly top 15.
Lee, Cliff 5+ more wins than deserved in '08. Absurd .78 Stranded%, with only a .72 K/I ratio. No chance to repeat.
Wainwright, Adam Comeback season expected, drop in K/I ratio (.67) with sustained better than average Stranded % (.76) is risky
Webb, Brandon Won +4 more than deserved in '08, slight tail off in 2nd H. Solid GB/FB ratio, remains a top 5 talent.
Haren, Dan Location was a concern in the 2nd H, but arm strength was not (increase in K rate). May be a bargain.
Harden, Rich Could be top 10 material "if" healthy, K ratio (1.22) was inflated thanks to league switch. Only a 56 QS% in '08
Kazmir, Scott Poor Control (high BB% .44) keeps from being a top 10. Needs to improve on GB/FB ratio to meet our projection
Young, Chris 3.35/1.08 ERAWHIP over final 48 innings. Should break the top 20 if he can go 170+ IP
Hernandez, Felix Deserved 5 more wins in '08. 1.25 WHIP in 1st half of .08, breakout potential is high. Still only 22!
Cain, Matt Bad luck pitcher every year. Deserved 16 Wins in '08! Breakout expected 2 years running.
Liriano, Francisco His 1st few games back from injury obscure his 2.74/1.19 (ERA/WHIP) 2nd half dominance.
Hamels, Cole Deserved +3 Wins in '08, improved Quality Starts to 70% of appearances
Baker, Scott Solid WHIP is justified by his control (.24 BB%). 18 QS in '08, quite undervalued coming into '09

For those new to Fantistics, since our inception in 1999, we take a Sabermetric approach to our player projections. Indicators similar to the ones mentioned above, allow us to produce quality projections that are used in circles outside of the fantasy universe. Last year we enjoyed one of our better forecasting seasons when we correctly forecast the statistical direction on 80% of our pitching player forecasts.

Subscribers can find more of our forecaster indicators this morning in their player projections software when they complete a web update.

Have a great weekend! 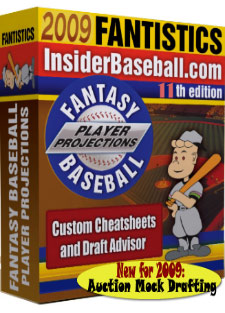