"Are all Fantasy Baseball Projections and Rankings the same and or more beneficial than ADP?"

Despite the success, statistical correlation (see links above) does not tell the entire story. To win a fantasy baseball league, you also need to draft players that are in line for a breakout season and draft them before the rest of the field.

Next to each players name is the consensus ADP or Average Draft Position from 5 major online commissioner services (Including ESPN, Yahoo, CBS). ADP is a representation of where players are being drafted in individual league drafts. The result is an average ADP, specifying what round and selection within that round where these players are being drafted. The results were normalized for a typical 12 man league. Thus a ADP of 9.11 would represent selection in the 9th round and the 11th slot within that round.

The column following ADP in the list below is where Fantistics Software (fantasy baseball projections) ranked these players during the preseason of 2009. The last column (early) represents the net  number of rounds that Fantistics was ahead of ADP. The bottom line: This is the value that a Fantistics subscription brought to it's members in 2009.

Back to the original question, are all fantasy baseball projections and ranking systems the same or not better than the ADP consensus? You decide... 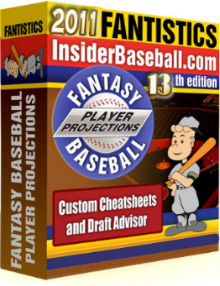 See the details of the Player Projections Software