Last season, just about this time, I wrote an article labeled 2010: Say Hello to The Dominance of Starting Pitching (part II) and has fate would have it...by the end of the season, 2010 became circulated by the mainstream media as the "Year of the Pitcher". Was it crystal ball forecasting? Absolutely not, the trends were clearly evident for anyone who looked at them. I went on to say that the shift has a likely direct correlation with the league's PED testing (it wasn't the ballparks). Although not a perfect screening, it clearly has placed enough fear to be an effective tool. Regardless of it's causal, we have a clear shift in the effectiveness of starting pitchers: 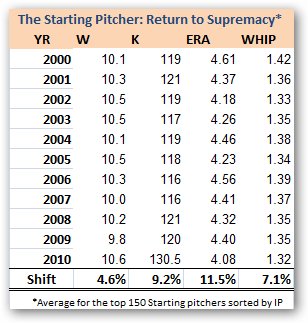 With an increase in ERA (11.5%), WHIP (7.1%), K (9.2%), and Win totals (4.6%), starting pitchers are clearly worth more today in terms of fantasy, than they were worth a decade ago. Yet, according to the pulse of the nation, their Average Draft Position (ADP) is lower today than it was a decade before! As many of you know, I've already written about how much more inherently valuable a starting pitcher is to a starting fantasy roster (see Premier Starting Pitching at Walmart Prices). It will be interesting to see how long it takes the masses to realize that following the herd can be hazardous.

So should we be drafting pitchers in the first round? Theoretically Yes, practically No. In other words: Take what they give you! If you can draft last year's Cy Young (Felix Hernandez) in the 3rd round (as I did in the 2011 Fantasy Sports Trade Association's Expert League), take full advantage of that situation. Since there is now a scarcity issue relating to power on the offensive side of the ball, it's prudent to take that offensive stud in the 1st round, but as that scarcity issue starts to fade among the offensive players...and it does rapidly, it's time to consider that starting pitchers contribute twice as much to their relevant fantasy categories (in a typical 5x5 league).

Shameless plug: The best part of our research and draft strategy is that it's already incorporated in our 2011 Player Projections Software. Our founding Position Scarcity theory (VAM) calculates the optimal rankings and auction valuations based on your specific league settings. All you need to do is plug in your league settings and let the software do the rest. It considers and calculates the optimal valuations for almost any type of league, whether it's fantasy points based or Rotisserie (4x4, 5x5, 6x6...12x12, etc.)

In the Part II segment, we'll take a look into how the subject of this article small ball will make it's mark on the offense in the years to come.

As typical, we start with our Sabermetric analysis as it aids us in defining our preseason projections. These notes and other can be found in the notes section next to each of the players in the 2011 Player Projections Software.  In no specific order, here we go:

Lowe, Derek Wins were overstated last year by 6, decent 2nd half 7W/3.41 ERA/1.33 WHIP. Value him as a 12-13 Win pitcher in '11.
Wakefield, Tim Struggled with a .62 Runners Stranded Rate, which hurt his ERA, and Win Totals in '10. Look for a rebound there into the .68 range.
Buehrle, Mark Runners Stranded Rate fell to .70 for 1st time (from .74) in 4 years. Part of those struggles can be tied to a career low .48 K/I ratio...which has been on a steady decline. He did however have a good 2nd Half 4.03 ERA/1.32 WHIP.
Garland, Jon Expect a downturn as his .77 Strand Rate is outside of his career norm. Consider that Petco really allowed him to pitch like an Ace, when you consider his .349 SLG against at home. Risk to start on Road.
Sabathia, CC As typical CC burned it up in the 2nd Half: 12 W/2.92 ERA/1.22 WHIP. Playing for Yankees offense earned him 2 additional Ws in '10...more of the same in 2011.
Westbrook, Jake Deserved 13 Wins in '10, becoming premier Ground ball pitcher, who pitches extremely well in Busch Stadium. Low K/I ratio makes his ERA and WHIP vulnerable, but could have a surprising season.
Beckett, Josh BHIP: he was unlucky with a .43 average over mean...which could be a reason for his poor runners stranded rate. Beckett relied less on his fastball last season (only 55% compared to 60-75% in his past). His FB still has most of his zip (93.5 vs. peak of 94.5), so there is reason for optimism.
Burnett, A.J. Burnett has lost a couple of MPH off his fastball (92.3), and that could account for the dip in his K/I ratio last season (.78 from .94 in '09). Does Burnett have a bounce back season left in him, that will likely depend on him gaining back a MPH or 2 on his FB...which is very attainable.
Dempster, Ryan The crafty Dempster saw his performance rebound in '10, as his K/I% rose as well. He's pretty consistent since becoming a starter again and outside from advancing age, none of his indicators are sliding.
Oswalt, Roy Oswalt turned the clock back, reversing a long term downward trend. His K/I ratio increased from .76 to .91. Don't trust the 2.76 ERA and 1.02 WHIP, his Strand Rate increased to .77 and he was lucky on balls hit into play (-.37). However don't totally discount the fact that he has developed an effective change-up which he threw 10% more often last year.
Santana, Johan Mets hope to have him back by Mid Season...not clear what Santana will be upon return...but he certainly won't be 100% from the get go.
Pavano, Carl If you don't trust Pavano's .72 Strand Rate with his .53 K/I ratio...then there's good reason to believe that we won't see a repeat of last season's 17 Wins.
Vazquez, Javier Moves back to the NL, where he's had the most success, but consider that his fastball lost 3 MPH last year, and saw his K/I drop from 1.09 to .77. Unless there's something wrong with that shoulder, we think we'll see something slightly better than a top 50 pitcher.