Update: There are a lot of bad weather situations today.

White Sox @ Detroit - This game looks extremely risky with both hitters and pitchers. It's been raining for most of the morning in Detroit and it appears to be continuing throughout the morning.

Indians @ Baltimore - This is game is just as ugly as the Cleveland game with an 80-100% chance of rain in Balitmore before the game, during the game and after the game. Everyone is risky here.

Yankees @ Astros - The second half of the game has a 50% chance of rain. It looks okay for now but if the rain is pushed up, we could be in danger of a shortened game.

Red @ Mets - There's a pretty steady 40% chance of rain during the entire game hour. Pitchers are risky in this one.

Braves @ Pittsburgh - With precipation percentages ranging from 100% down to 35% throughout the day, these thunderstorms appear to be more of the scattered variety but there's a pretty steady 60-70% chance during the game window.

Happy Saturday to everyone! It looks like another big day in daily fantasy today. Before we get into the picks by position, I'd like to talk general strategy for the day's action. When deciding who to play in a typical salary-cap daily fantasy game, there are a lot of different factors that come into play. The first and foremost is the price point of each player. While we'd all love to construct a lineup with superstars, we have to stay within the constraints of the salary cap. As a result we need to find values in players by looking at the following factors:

Below we dig into some deeper splits beyond your average home/away and lefty/righty. Logic says that matching up a hitter's strength with a pitcher's weakness is a recipe for success. That's why I start off each of my daily articles with batted ball and pitch type splits. When you're on a fence about a player, looking for a contrarian tournament play, or just are searching for a value, pull a name from one of these lists.

Note: All players listed below also have a wOBA exceeding the .320 league average mark against their opponent's specific handedness for the day's action. All statistics are based on a 3 year sample ranging from 2013-2015)

Clayton Kershaw @ Miami - He is pitching on the road but he's traveling to another very pitcher friendly ballpark. Clayton Kershaw is always in the conversation as a top play so of course we need to mention him but I also need to make that that the Marlins hitters have done a pretty good job against left-handers this season, ranking second in team ISO (.177) and third in wOBA (.325) and wRC+ (111). I'm not saying this to square you out of Kershaw but I'm merely mentioning it because his massive price tag across the daily sites would lead you to believe his matchup was as solid as Scherzer's last night but it's not. With that said, he's a heavy favorite on the road in what's projected to be the lowest scoring game total on the slate.

Matt Harvey vs Cincinnati - With a price $1,800 cheaper than Kershaw on FanDuel and $1,200 cheaper on DraftKings, Harvey is a nice 1b option today. The Reds have been swinging the bat well lately but Harvey is an elite strikeout arm and have a ho-hum 96 wRC+ against right-handed pitching this season. Detractors from Harvey will point to his struggles to begin the year and claim he's not worth the name value price. I disagree, mainly because his struggles this season have been due to the long ball (12 homeruns allowed). This surge in homeruns has been more of a result of bad luck rather than poor performance. His average homerun distance of 395 and average speed on his homeruns of 102.9 are both below league average yet his HR/FB rate is 13%, 5% higher than his career average. We're going to see Harvey regress back towards the elite pitcher he is in the coming weeks and I think today's matchup is worth a shot.

Gio Gonzalez @ Philadelphia - It's no secret that the Phillies bats have struggled to get going this year so any time a reasonable starting pitcher faces them, they become in the conversation for a DFS option. Today is no different with Gio coming to town. He provides nice salary relief down from Harvey and Kershaw but still has nice point upside. Expect 6-7 innings pitched with about 3 runs allowed and 6-7 strikeouts. With Adam Morgan on the mound, I'd also expect the Nats to have a good shot at the win. On FanDuel, that line would be good for 14-15 points, which would provide solid value from his $9,200 price.

Michael Wacha vs Cubs - Wacha has historically been a better pitcher at home than on the road and while he's not typically a huge strikeout pitcher, he's facing a Cubs team that strikes out in 1 out of every 4 at-bats against right-handers. On top of that, the Cubbies offense has been almost non-existent over the last 7 days as their lineup has a wRC+ of just 74 over that time span.

Charlie Morton vs Atlanta - At a mere $6,200, Morton is a fine second-pitcher option of DraftKIngs. Considering Teheran's drastic home/away splits this year, the Pirates are in a good position to get the win and Vegas agrees, making Morton a heavy -160 favorite in a game with a projected run total of 7. 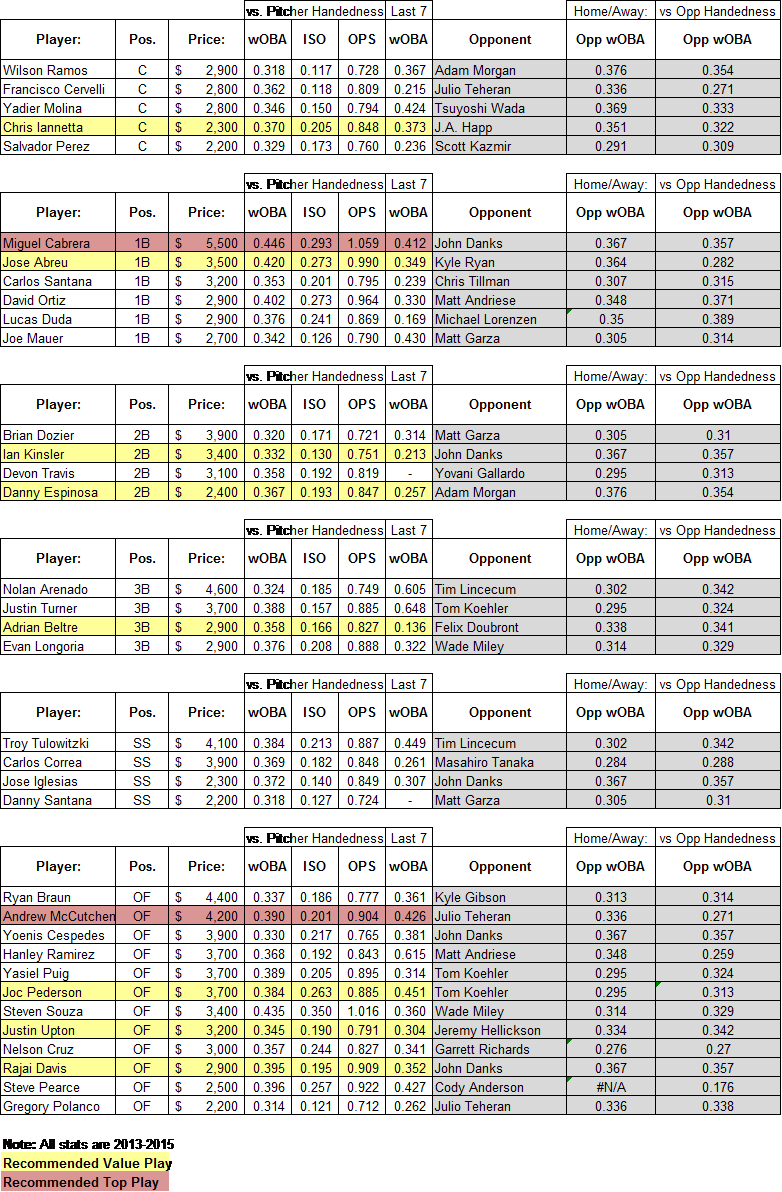