Chris Sale (CWS) - Chris Sale is now an unbelievable 8-0 with a 1.67 ERA after throwing a 1-run complete game against the Yankees on Friday. The White Sox lefty has seen a noticeable dip in his fastball velocity this season, sitting between 93-94 MPH compared with 95-96 MPH last year. Despite the dip, we're actually seeing about 2% increase in his whiff rate on his fatsball and he's inducing nearly 17% more groundballs on the pitch. It's an interesting change because neither the movement on the pitch, his locations, nor his release point has changed, but the outcomes are significantly more positive than last year. Based on recent game data, he has been relying less on his four-seamer and moving more towards his sinker, especially in his last 3 games entering Friday night's contest. My best guess is that this new pitch mix is contributing to fooling hitters, causing them to either miss or not make quality of contact.

Jackie Bradley Jr. (BOS) - JBJ has been on an absolute tear recently, getting hits in every game since April 24th (19 game hitting streak). He added 3 more on Friday night, including a double. Over that stretch, he has slashed .412/.452/.838 with a 255 wRC+ (a metric used to value a player's overall ability at generating runs, with the baseline sitting around 100). Bradley Jr. has always been a reverse split hitter, that is, a player who hits better against same-handed pitching. Bradley is a lefty batter and has continued to fare weather against lefties this year. However, it's been his ability to also start hitting right-handed pitching that has allowed him to maintain this hot streak. Sometimes players just need regular at-bats to get into the groove and JBJ has been able to get just that. I'm not a huge believer in the .300+ batting long-term thanks to his 74% contact rate and 12.4% swinging strike rate, but he might just have sneaky power upside if he can continue crushing the ball when he does make contact (40.9% hard hit rate). He remains a nice value play in DFS, despite usually hitting 9th in the batting order. Looking towards tomorrow, his $4,000 price tag is a bit more appealing on DraftKings than his $3,900 price on FanDuel.

*Rougned Odor (TEX) - * Odor had a dream matchup on Friday night against a homerun prone knuckleballer (R.A. Dickey). Unfortunately, Dickey absolutely baffled the Rangers and limited them to just 3 hits over 8 innings. Luckily, Odor was one who had a hit. The second baseman has been on a ridiculous hot streak lately, with an ISO of .419 coming into Friday night's game. On the season, Odor already has 7 home runs after hitting just 16 the entire year last year. So what's causing the uptick in these power numbers? It's not a jump in his hard hit rate, because his 27% mark this season is the same as it was last year. Similarly, the speed of the homeruns off his bat are actually lower this season than last season. Instead, I believe it mostly a situation of good luck with the placement of his homeruns. On the season, he has 3 homeruns in Texas, 2 homeruns in Detroit, and single homeruns in Los Angeles (Anaheim) and Toronto. Of those parks, Detroit and LAA are two of the most pitcher-friendly parks in the league. The homeruns in Detroit were 2 of the 4 longest that he has hit on the season, while the homerun in LA was perfectly placed in right-center field, just clearing the fence in one of the shallowest places in the stadium. Similar luck was involved with his homerun in Toronto, a ball he hit just 348 feet that just barely cleared the right-field wall near the foul pole. My point in breaking this down is that we don't analyze ball placement enough when we're evaluating players. Had those 4 homeruns been in different ballparks, we could be talking about 4 flyouts instead of 4 homeruns. That would have brought his homerun total down from 7 to 3 and his batting average down 30 points. Be wary of small sample sizes and the impact these have in your opinion of players. Nonetheless, I'm willing to go back to the well and play him in DFS tomorrow as he takes on the flyball pitcher, Marco Estrada. Odor is $4,500 on DraftKings and $4,300 on FanDuel. I like stacking the Rangers in tournaments tomorrow and Odor will be a core component of those stacks. However, given the somewhat elevated price, I'm probably going to look elsewhere in cash games (Joe Panik, Neil Walker, or Jason Kipnis to name a few).

Rich Hill (OAK) - Rich Hill didn't have his best stuff on Friday night, but still picked up the win after allowing 3 runs on 4 hits and 4 walks. He did strikeout 7, but he was terribly inefficient in his pitch count, lasting only 6 innings. Hill is a really intriguing guy to analyze this season. He took the baseball world by storm during the last several weeks of the 2015 season in a handful of starts for Boston, leading him to sign a nice contract with Oakland. Rich Hill isn't going to be the pitcher that he showed at the end of last season, but I'm not sure we really know the type of guy he's going to be. Coming up through the Cubs system, he was a highly touted prospect who relied heavily on his curveball. Unfortunately, he was never able to stay on the field and ended up bouncing between 6 different teams (multiple stops in a couple cities), before finally having his breakout with the Red Sox. Hill has struggled to pitch deep into games in the early going, but he has done a pretty good job at limiting the damage against him. Overall, the one word I can use to describe Rich Hill is probably inconsistency. While he's had 3 games with 8+ strikeouts, he also has 3 games with 5 or fewer strikeouts. In addition, he also has 3 games with 1 or fewer walks, but then turns around and has 4 games of 3 or more walks. I'm hesitant to buy into Hill given this inconsistency and his vast injury history. With that said, he has had an extremely difficult schedule to begin the season and with this in mind, it makes his results even more impressive.

Nick Tropeano (LAA) - Nick Tropeano has been even better than what many of us probably expected from the youngster, particularly in terms of strikeout ability. Entering Friday's game, the Angels right-hander had posted a 13.8% swinging strike percentage, a mark which would place him 6th in baseball, if he qualified. Without a dominating fastball, he relies on changing speed and keeps hitters off balance by being effectively wild (11.9% walk rate comes with, unfortunately). He's been propping up his 89% strand rate with his above average strikeout rate, but even with the higher K's, maintaining that same strand rate all season won't be possible. While he has done a great job at limiting contact (68.8% contact rate), but when batters do make contact, it's usually hit extremely hard (37.8%). Tropeano's xFIP is about a run higher than his ERA and his other underlying statistics also agree that he's a house of cards waiting to crash back down. That house of cards didn't totally collapse on Friday, but it started to quiver. Tropeano went 5 innings and allowed 2 earned runs on 5 hits and 3 walks, while only striking out 3. I'm not a huge fan of him long-term. 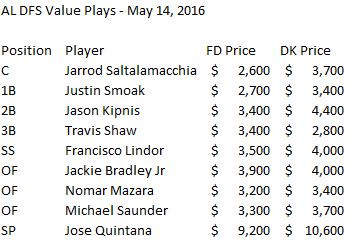