*Dexter Fowler (CHC) - *Dexter Fowler continues to tear it up, tallying 3 more hits including his 5th homerun of the season. He's currently a top-20 player in most fantasy leagues, but is this performance going to continue, or has he been a beneficiary of good luck? The first thing that stands out with Dexter Fowler is his .324 batting average, which is about 50 points above his career mark and nearly 75 points above last season. Initially his .406 BABIP screams regression and appears to be the leading indicator that is boosting his batting average, but if we peel back the onion a bit further to reveal the batted ball quality metrics, we see that he has a hard hit rate of 41%, which is absolutely elite and about 13 points above league average. We know that when you hit the ball hard, good things happen and that certainly seems to be the case for Fowler. Another thing that I like to see is the improvement to his stolen base success rate. After stealing bases last year with a 74% success rate, so far he already has 6 bases this season with an 86% success rate. This improvement on the base paths not only keeps him on base, it also puts him into scoring position more frequently for the Cubs' big boppers behind him, thus getting him in position to score more runs. I hate projecting out player's stat lines, but just for fun, if Fowler kept up his same pace (and I'm honestly not seeing too many indicators telling me he can't), he would finish with 20 homeruns, 83 RBI, 24 stolen bases, 119 runs and his excellent slash line from above. That's basically Starling Marte's 2015 campaign with a few less steals but better batting average and about 40 more runs scored. In other words, if he keeps up his pace, we're talking about a 2nd round value, pushing into 1st round. Now let me be clear that while I'm buying into the breakout, I do not think he will finish with the numbers I just gave you. He has battled injuries off-and-on as well as consistency. Despite that, I do think his previous baggage is still weighing down his perceived value and he could be acquired for less than what he will actually produce.

*Mark Melancon (PIT) - *Pitching in a tie game in the 9th inning, Mark Melancon gave up 3 runs (none earned) to take the loss. It was an unusual situation because Melancon actually struck out the first two batters he faced in the inning before his catcher, Francisco Cervelli, chucked a routine dribbler in front of the plate into right field. Melancon then yielded a walk to another baserunner before allowing a 2-run single to Tony Wolters. The Pirates yanked him after that at-bat, but his replacement promptly allowed a 2 run homerun. All in all, the outing sounds worse on paper than it actually was and at the moment, I'm not worried about Melancon's job security whatsoever. He's currently second in the major leagues with 14 saves, but we have seen a noticeable dip in his strikeout rate this year along with an even bigger plunge in his groundball percentage. For most of his career he has been sitting around 75% in the strikeout%+groundball% metric, but this season he's all the way down to 55%. Right now his hard hit % is just 23%, but if we see that number rise without his groundball rates rising, it might be time to sound an alarm.

Yoenis Cespedes (NYM) - Yoenis Cespedes hit his 14th homerun of the season on Saturday and is now tied with Nolan Arenado for the major league lead. Cespedes is off to a torrid start to the season and is clearly out to cash in with another payday this off-season now that he will be the top free agent on the market. On the season he's slashing .291/.375/.642 with 14 homeruns and 35 RBI and is surprisingly walking at a rate more than double what he has previously done in his career. On the season, his batting EYE is just shy of 0.5, an excellent mark for a player whose career EYE is just 0.30. I'm buying into his improvement and I don't see any reason to think he's playing above his head right now.

Marcell Ozuna (MIA) - Marcell Ozuna led the Marlins' offense on Saturday night by going 3-for-4 with a double and triple. On the season, Ozuna now has 18 extra-base hits, including a major-league leading (tie) 4 triples. Ozuna has his HR/FB back near where it was at during his breakout 2014 campaign after experiencing an artificial dip last year. While I have no problem with projecting out the power numbers to continue, I do want to raise concern about his ability to maintain a batting average north of .300. With a BABIP just 20 points higher than his career levels, Ozuna's career batting average of .269 seems like a much more reasonable landing spot than his current .301 mark.

Jared Eickhoff (PHI) - Today's DFS slate is loaded with really good starting pitching, particularly near the top of the salary limit. While that means we will likely see a nice distribution among starting pitching, generally that distribution will remain among the top tier (i.e Syndergaard, Scherzer, Maeda, etc), with many owners using a lot of the same value plays in their lineups in order to stay under the salary cap. On days like this, that means that you're going to have difficulty cashing because you will have a lineup extremely similar to the majority of the rest of the field if you pay up for one of the top starters. To differentiate yourself (yes, even in cash), I'm looking at Jared Eickhoff at just $7,100 on FanDuel and $7,200 on DraftKIngs. With a price tag $2K-$3K less than the big names, this enables you to move off the 2 or 3 "standard value plays" that will be >50% owned in cash games and can upgrade your hitters in these positions. While Eickhoff doesn't have the strikeout upside that Sydergaard or Scherzer might have, he is facing an offense that ranks 4th to last in wRC+ against right-handed pitching and a league-worst .093 ISO. 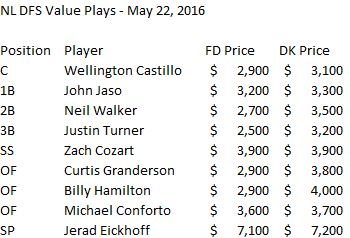