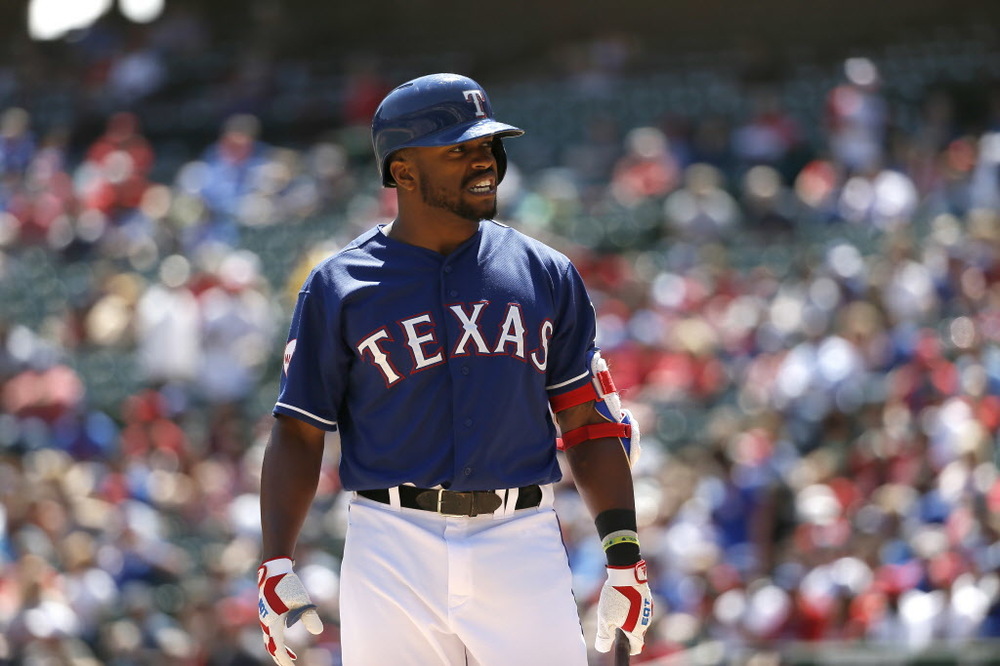 Two springs ago Delino DeShields was a Rule V pick who had a strong performance and earned a starting job with the Rangers when they broke camp. He ended up hitting .261 with a .344 OBP and 25 steals in 121 games at the age of 22. Last year DeShields had a significant sophomore slump. He ended up spending a couple of months at AAA and only hit .209 with a .275 OBP and 8 steals in 74 major league games. This spring the center field job is not open but DeShields is in the mix for left field. So far he is hitting .276 with a .364 OBP and 5 steals in 12 Cactus League games. If he looks productive again, DeShields would be attractive to Texas. He would be a good leadoff choice, which would give him solid fantasy value. It would allow them to move Carlos Gomez down in the order, increasing his RBI chances. Sitting atop a powerful Rangers' offense would make DeShields a good producer in the average, runs, and steals categories and likely a value.

Besides Jurickson Profar and Delino DeShields, Ryan Rua is one of the candidates to grab the left field job for the Rangers. Rua has almost a full season of major league experience stretched across the last 3 seasons as he's bounced between AAA Round Rock and Texas. Last year he appeared in 99 of his 155 career games and hit .255with 8 homers and 40 runs. Rua's bid for a full time position is severely hampered by his platoon splits. In 2016 he hit .284 with a .353 OBP against southpaws but only .239 with a .319 OBP against RH pitching. Rua's career slash lines are .277/.328/.451 vs. LH and .238/.293/.369 against RH. With an early overall slash line in the 2017 Cactus League of .241/.267/.369 his best shot at not going back to AAA or being DFA is as a RH bat off the bench. That doesn't translate into fantasy value.

Joey Rickard burst on the scene last spring by slashing .397/.472/.571 in the Grapefruit League. So far this spring he is doing even better, with a slash line of .391/.588/.696 with 2 homers and 10 walks in 16 games. This earned Rickard a spot on the Baltimore roster. Before a hand injury ended his season he hit .268 but only had a BB% of 6.4%, leading to an OBP of .319. Rickard had shown much more patience in his minor league career, walking 191 times in 1499 PAs. He performed much better against southpaws in 2016, with a slash line of .313/.367/.494 against them. If he continues to draw a high number of walks in Florida that will go a long way to giving him at least a platoon role in the Orioles' outfield to at least start the season.

If the Orioles go with a platoon in left field, Hyun Soo Kim will likely get the ABs against righthanded pitchers. He slashed .321/.393/.446 against them in 2016. Kim had a rocky start to the season, refusing a minor league assignment early on, which didn't endear him to management. He doesn't have the power normally expected from a corner outfielder, only slugging 6 homers in 346 PAs, but with a BB% of 10.4% he shows excellent bat control and his average should be near .300.

In a 3-way battle for the starting catcher spot in Milwaukee, Andrew Susac has fallen behind with a .192 average. That leaves Manny Pina with his .346 average in 11 Cactus League games as one of the frontrunners. Pina took over the backup spot with the Brewers last year after Jonathan Lucroy was traded and slashed .254/.346/.394 in 33 games after being called up on August 1. It was by far the most major league action Pina had seen and his first since a single game played with the Royals in 2012. As a journeyman who turns 30 in June, he may end up filling the backup role again as the main competition when the regular season rolls around ends up between Susac and Jett Bandy.

Jett Bandy is currently hitting .310 in 10 Cactus League games. Bandy saw 231 PAs with the Angels last year, displaying some power with 8 homers. His average was only .234 but he suffered from a .246 BABIP. With manager Craig Counsell stating that the race for catcher will likely be decided by who has the hot hand, Bandy has the favorite spot at the moment but that needs to be watched, as spring training continues. If he wins the job he could get a boost in value from playing in Miller Park.

Andrew Susac turns 27 later this month, as does Jett Bandy. If he was hoping to make a strong play to make his age-27 year the one where he grabbed a starting spot, he has put himself in a hole with his early spring training performance. Susac got a few appearances after coming over last year from the Giants as part of the Will Smith deal. He had played at AAA for the entire season before the trade and put up a respectable .273/.343/.455 slash line with 8 homers in 239 PAs. That's about the same ratio of homers as Jett Bandy, but Bandy hit his in the majors. Right now it would appear that Susac will get an early season ticket back to AAA but will be looked at as an option should Bandy falter.

Ian Desmond will have surgery tomorrow on his broken hand. That injury will significantly delay his bid to take advantage of the hitting bonus of Coors Field. Although Desmond hit 12 of his 22 homers on the road last year his slash line in Texas was .330/.368/.497 as opposed to .241/.305/.398 away from home. The Rockies have not given a projected return date. Since the nature of his injury will prohibit any significant work on his hitting before the hand is completely healed it is not unlikely that it will be at least June before Desmond gets playing time.

Stephen Strasburg is making some changes to the way he works, hoping to avoid the injuries that have plagued him for much of his career. The most obvious is that he plans to work exclusively out of the stretch. He feels he is able to control his follow through better than when he goes from a full windup. The second is that he is planning to reduce the use of his slider, which made up 17.1% of his pitches last year. The pitch was highly effective, but Strasburg feels it contributed to his arm woes that cut his 2016 season short. Finally, Strasburg changed his grip yesterday, grasping the ball after it is in the glove instead of beforehand. This came after the Cardinals hit Strasburg's fastball hard in his last Grapefruit League outing and he was likely tipping his pitches. The results yesterday against the Tigers were solid as Strasburg allowed 2 runs on 3 hits in 4 IP while striking out 5. If Strasburg can stay healthy and start more than the 23 or 24 times he did in 2015 and 2016, respectively, he will be back in the top echelon of starters that his production (11.15 K/9, 15 wins, 2.92 FIP) reflects.

David Price threw from flat ground for the third straight day and said his elbow felt the best it's been since he had a scare with soreness. What else he said when talking about his discussions with Drs. James Andrews and Neal ElAttrache discussing how he always has issues in the spring didn't do much to bring down concerns. "Oh, they said if I was 22 or 23, they'd tell me to go have surgery, absolutely," Price said. That doesn't quite sound like an all clear was given. The Red Sox have no timetable on when Price can start long tossing or throwing for a mound so his progress needs to be closely followed.

The line of 3 runs on 3 hits in 3.1 IP didn't look great for Noah Syndergaard. However, there was an explanation that eases any worries about this becoming a long term pattern. Thor has been suffering from bronchitis. That would make it very difficult for anyone to be as effective as possible. He maintained a fastball in the 96-97 mph range and didn't allow a run until the 4th IP.

Anthony DeSclafani doesn't have a torn elbow ligament, so he won't need Tommy John surgery. That's the good news. The bad news is that an MRI did reveal a sprained UCL. That means no throwing for at least 4 weeks, guaranteeing that DeSclafani will open the season on the DL. This now leaves 3 open slots in the Cincinnati rotation.

One of the 3 open Cincinnati rotation slots may go to Amir Garrett. He threw 4 innings of no-hit ball yesterday, striking out 3. Garrett's K/9 dipped from 9.12 to 7.18 after a promotion to AAA last season. He would still likely end up with a mark in the 7.00-8.00 range if he makes his major league debut as a Reds' starter. Garrett is carrying a 0.79 ERA in the Grapefruit League and has walked 2 batters while striking out 9 in 11.1 IP over 4 games. Control has been an issue with him as he has progressed through the minors. Last year Garrett posted a BB/9 of 3.27 at AA and 4.12 at AAA. Last year he walked 2 in 1.1 IP in spring training work, so the low number of walks early is encouraging.

Albert Pujols made concerns about his readiness for Opening Day dim a bit more yesterday. He slugged his first homer of spring training in his 5th AB of the Cactus League. Pujols was the Angels' starting DH. Even if his offseason surgery for plantar fasciitis reduces his time in the field early, his bat is rounding into shape.

Corey Seager is officially out of Dodgers' Cactus League games at least through the rest of this week. That will give him a maximum of about 2 weeks to get ready for Opening Day. LA is saying they are not worried about Seager's availability for the start of the season. Last year he only had 20 ABs in Cactus League games, but also got some work in during minor league contests before camp broke. Seager might have a little more trouble getting in shape from an oblique strain than he did with his 2016 knee injury.

Brandon Nimmo had been having a solid spring training before leaving the Mets to play for Italy in the WBC. He had hit .476 in 9 Grapefruit League contests. Nimmo suffered a hamstring strain in Italy's loss to Puerto Rico Sunday and his shot at breaking camp with the Mets took a serious hit. Nimmo hit .274 with a homer and 12 runs in 32 games last season and would have likely filled a 4th or 5th outfielder spot if he hadn't been injured. He retains his status as one of the Mets' top prospects but his advancement has been put a little behind schedule.

Tweets by Fantistics
Preseason Prep - March 13, 2017
A Look at ADP by Kyle Elfrink