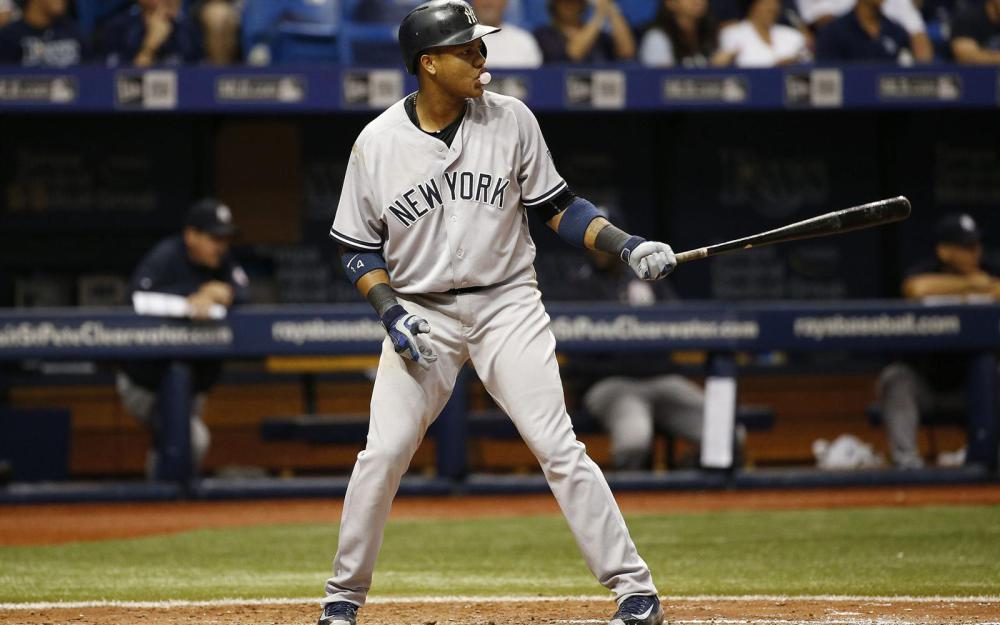 Aaron Judge (NYY) - Aaron Judge is up to his old tricks, hitting his 18th home run and driving in his 40th RBI of the season on Friday night. He's slashing an incredible .326/.431/.691 in his rookie campaign and currently has an almost comical .365 ISO. On the surface, his .404 BABIP seems a little out of line, but then you get really comfortable with the number when you take into account his 47% hard hit rate. His power is legit folks, the only question is whether he will be able to adjust to the pitching once teams start exploiting the holes in his swing (if you believe he has any, that is).

Starlin Castro (NYY) - Starlin Castro hit his 8th homerun of the season and believe it or not, he's actually slashing .318/.356/.479 on the year. No, this isn't 2011, Yankees fans. This is the new and improved Starlin Castro whose trying to fight for a spot alongside Gleybar Torres, not to be replaced by him. So what's driving this jump in batting average? A slight improvement in his strikeout rate to 17% from 19% doesn't hurt, but it looks to be primarily driven by a 55 point increase to his BABIP up to .362, which is nearly 40 points above his career average. Unfortunately, with a hard hit rate and opposite field % rate that are about constant year-over-year, it truly does seem like Castro is getting favorable luck on his balls in play, as well as his home runs. According to HitTrackerOnline, Castro has a well below average 101.6 MPH batted ball speed on his homeruns with a really low 388 average distance and 3 of his 8 homeruns would have cleared the fences in 4 or fewer stadiums. Look for Castro to take a step back in both power and batting average over the coming weeks. Now is a great sell high opportunity.

Alec Asher (BAL) - Alec Asher tossed 6.1 innings of 2-run baseball as he picked up a 3-2 victory over the Red Sox in his second career start. Asher allowed just 3 hits and he struck out 5 in the outing. Asher isn't considered a strong pitching prospect and has bounced around between 3 organizations in his six year minor league career. He's definitely not a strikeout pitcher, focusing more on locating his pitchers and letting his defense do the work. In 15 career MLB starts, he has a below average 7.9% SwSt%, below average 82.5% contact rate, and below average 27.5% chase rate. He's not a great fantasy option, so don't rush out to your waiver wires to add him after his strong performance on Friday.

Josh Donaldson (TOR) - Josh Donaldson hit 2 solo home runs on Friday night and has been white hot since returning from the disabled list. While Donaldson is on the wrong side of 30 and he probably does only have a year or two left in his prime, he remains an elite offensive option in single-season formats. The Blue Jays offense, as a whole, are all swinging the bat much better lately and Donaldson will remain a key cog in the middle of the lineup and will continue to serve as a catalyst. Don't buy into the narrative that he's washed up or done. Avoid falling into the bias against aging players and he should reward you handsomely. For DFS action on Saturday, Donaldson remains underpriced across the industry and is an excellent value on FanDuel at just $4,000 against lefty Jordan Montgomery.

J.D. Martinez (DET) - JD Martinez fell just a single short of the cycle on Friday night and finished the night 3-for-5 with 2 RBI and 2 run scored. Martinez has picked up right where he left off last season despite missing the entire first month of the season with a Lisfranc fracture in his foot. Martinez is currently on pace for record highs in hard hit percentage (56.5%) and fly-ball percentage (48.6%). That's a great combination to possess for a power hitter.

This is just a small sample our daily analysis, join our member area for over 80 player updates daily. Click here for details: https://www.insiderbaseball.com/baseballsample.htm