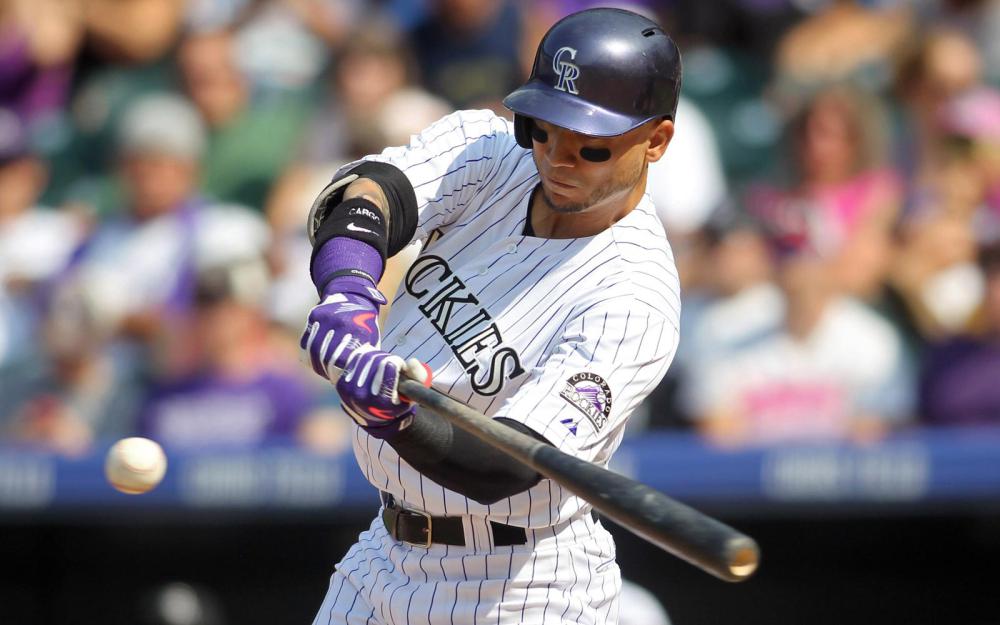 Jon Lester (SP) CUB - The forgettable first half for the Cubbies came to a miserable end Sunday as Lester allowed 10 runs (4 earned) in the first inning of a 14-3 defeat. His velocity is down to its lowest level in 10 years, his control is worse than it's been since 2012, and Kyle Schwarber is back in LF, so the defense will continue to be vastly inferior to the 2016 model. Lester is an excellent acquisition target right now. Huh? Look, all of those negatives aside, Lester is still the #36 SP right now, and with all of the negative narrative surrounding both he and the Cubs I'd expect that his value is the lowest it has been in at least 6 years, and perhaps almost 10. Lester is missing more bats and posting a better chase rate than he ever has before, his GB rate has jumped back up near 50%, and he has been a bit unfortunate via BABIP after last year's excellent luck. I believe that the Cubs are bound to play some better ball in the second half, and I think that if you can get Lester for anything under SP3 value I'd pull the trigger, because that, for me, is the minimum standard that I believe he will offer for you from here on out.

Jhoulys Chacin (SP) SD - Chacin might be a solid pickup for the rest of July for a couple of reasons. First and foremost, he has rattled off 7 straight QS, getting the benefit of some very favorable BABIP numbers during that stretch. Perhaps more importantly, his schedule for the remainder of the month has three home matchups and a trip to SF. Chacin has a 1.68 home ERA and a 7.95 road ERA this season, highlighted by an HR/9 difference of 1.12 between the two. Yes, the FIP ERA difference is only 3.59 to 5.55, but that still makes for a usable starter when he's at home. Chacin is the picture of a streaming SP, but grabbing him now could provide dividends since he could justifiably be in a rotation in all formats for his next 4 starts or more (he opens up August in PIT and LA, two more pitcher-friendly venues).

Patrick Corbin (SP) ARI - Just about everybody forgot about Patrick Corbin after his two awful starts surrounding June 1st, but since then Corbin has rattled off 4 QS out of 6, allowing 3 ER in less than 6 innings in each of the other two. He's struck out 41 in 35 IP over this stretch, and while the ERA is simply decent and the control has been a bit poor, it does give you a glimpse of the upside here. The velocity is at a career-best and the swinging strike% and GB rate aren't far behind....I'm of the opinion that Corbin will be a worthwhile SP5 in the 2nd half in 12-teamers, and a viable streamer even in shallow leagues.

Freddy Galvis (SS) PHI - Galvis hit two homers Sunday to finish the first half with 10, and despite the Phillies not running as much in general, he still looks like he could be a viable MI in standard leagues. With a .277 BABIP despite a LD rate greater than 21%, Galvis is due for a bit better luck on balls in play, and with a GB rate that is steadily dropping (3 years straight), even his below average power can result in 15-20 HR. Add in that he's hitting near the top of the order, and you have an underappreciated player overall. He's right about at his power ceiling...much more than 20 HR with his exit velocity would be too much to ask, but there's some upside here in AVG and SB (should the Phils become more aggressive in the 2nd half).

Gerardo Parra (OF) COL - Parra came off the DL with a 7-13, 5 RBI, 3 2B series against the White Sox, and he's now hitting 335/360/503 through 172 PAs this year. He's posting his lowest chase rate since his rookie season of 2009, a career-best hard contact rate of 34.4%, and a LD rate of over 28% that makes his .360 BABIP a bit unlucky. When he's playing, he's a solid starter in most formats, last year notwithstanding. The problem here will be what happens when Dahl and Desmond come off the DL, as there simply isn't enough playing time to go around....Raimel Tapia is lurking around as well, and at just 23 he needs to play somewhere. I expect the Rockies to do something this month to alleviate the roster crunch here, as they certainly could use another SP or two and they have plenty of offense to sell, be it veterans or youth. For a player like Parra, who I believe is under 20% owned on all sites, things will likely shake out over the next fee weeks. As it stands right now, he should be owned if he's going to be playing most of the time, which is the case at present.