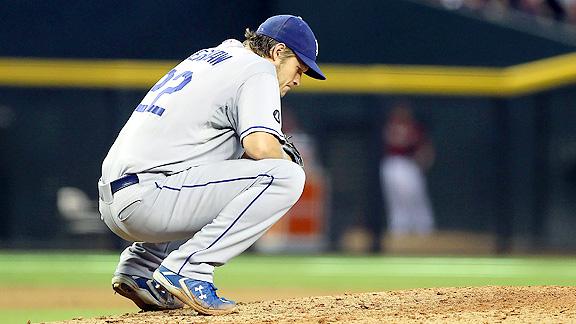 Clayton Kershaw (LAD) - Clayton Kershaw left Sunday's game after just two innings with soreness in his lower back. He struck out the final batter of the second inning via strikeout, but walked on the mound with noticeable discomfort. Kershaw missed July and August of last season with a herniated disc in his back, so today's injury is especially concerning. After the game, manager Dave Roberts spoke to the media and said "it is a DL situation. He'll take 10 days regardless". The Dodgers can certainly afford to be cautious with their ace, but if team doctors expect Kershaw will miss any extendable period of time, look for the Dodgers to throw their name in the hat for another starting pitching over the next week before the non-waiver trade deadline. Before the game on Sunday, Jon Morosi on Twitter said that the Dodgers were showing strong interest in Yu Darvish. Kershaw's injury will only add fuel to that fire.

Dee Gordon (MIA) - Dee Gordon stole another base on Sunday, giving him three during the weekend series against the Reds. Gordon has been exactly what we thought he would be this season, slashing .290/.333/.347 with no homeruns and thirty-five stolen bases. Gordon has never been a hard hitting offensive player (career average hard hit rate is 16%), but he doesn't hit the ball softly either, instead having most of his batted balls categorized as medium hit (60%). Pair that with his 69% combination of center and opposite field placement (keep in mind he bats left-handed), and he is able to maintain a solid batting average with his always-high 87% contact rate. He's a tremendous source of speed at a surprisingly disappointing second base position this year.

Starling Marte (PIT) - It seems Starling Marte is able to produce the numbers with or without juice. At least in Coors Field, that is. Marte had a huge weekend in Colorado and capped it off with a solid 2-for-5 day with an RBI in a loss. Over Friday and Saturday, Marte racked up 3 steals to give him 5 on the season. In a year where steals are at a premium, Marte is going to be an important part of many fantasy owner's stretch runs. Marte's hard hit rate has been below league average, but given the small sample size, I'm not overly concerned about that aspect quite yet. No true concerns about Marte from my perspective, so I see no reason to try and sell high after this weekend.

Willson Contreras (CHC) - Willson Contreras hit another the go-ahead home run on Sunday night for the Cubs. Contreras now has 15 home runs, 52 RBI and a slash line of .269/.334/.491. Contreras' has thrived as the Cubs' primary catching option since released Miguel Montero last night. Given his high swinging strike rate of 14% and low 70% contact rate, he's probably near the ceiling of his batting average right now and his 33.5% hard hit rate is solid, but not enough to support his 24% HR/FB rate. He'll probably regress, but he's still an excellent option for the catcher position.

Paul Dejong (STL) - The Cardinals' new everyday shortstop, Paul Dejong, hit his 12th homerun in just 165 at-bats. Dejong has flashed solid power in the minor leagues, hitting 22 home runs in 2016 and 13 through just 45 games to begin this year. His 38% hard hit rate certainly supports his 22% HR/FB rate, and while we don't love the 71% contact rate, some sacrifices have to be made when talking about this type of player. An area of concern is certainly his approach at the plate, where he has just a .07 batting EYE. His 16% swinging strike rate certainly doesn't help matters, so tread carefully here and wait for the regression monster to rear it's ugly head.