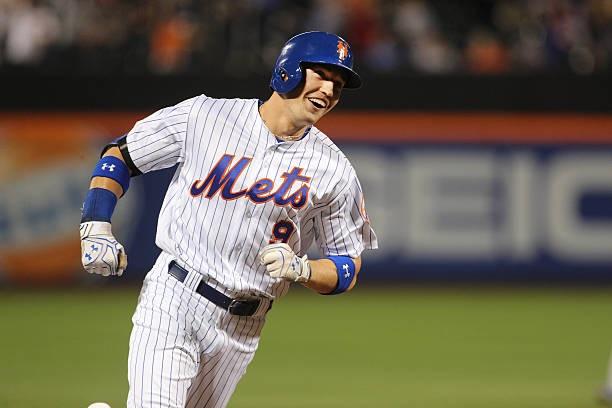 Brandon Nimmo (OF-NYM) Nimmo went 2-4 with his 7th home run of the season Friday night. Following a 1-9 performance over 2 games during the Mets doubleheader Monday, Nimmo has rattled off 4 consecutive 2-hit games, scoring 4 runs and launching 2 home runs while driving in 6 with 2 stolen bases. With nearly 150 plate appearances under his belt, it is becoming more and more difficult to overlook Nimmo who is contributing in every notable fantasy category. He has 18 extra base hits, 21 walks and has been hit by 8 pitches to boost his OBP to a stunning .442. A .351 BABIP may seem a bit on the high side, but considering Nimmo checked in with a .365 and .360 BABIP across 2016 and 2017 in nearly 300 Major League plate appearances, he should be a staple at the top of the Mets lineup for the remainder of the season.

Mike Foltynewicz (SP-ATL) Foltynewicz dominated Washington Friday night tossing his first career complete game shutout, allowing 2 hits while striking out 11. Since getting shelled for 6 earned runs in 5 innings May 4 vs the Giants, Foltynewicz has only allowed 2 earned runs on 16 hits over his last 5 starts. In 2018, Foltynewicz has increased both his K% (20.7% to 27.1%) and BB% (8.5% to 11.4%) from last year but hitters have had a much more difficult time getting base hits (.271 avg in 2017 vs .213 avg in 2018). His approach has seemingly been to paint the corners as his BB/9 of 4.35 ranks 3rd among NL starters but batters have struggled putting the ball in play. As long as he avoids elevated pitch counts due to walks, he could be a candidate to pitch deep into ballgames for a young, hungry Atlanta team.

Stephen Strasburg (SP-WSH) Strasburg (6 and 2/3 innings, 3 earned runs, 10 Ks) took the loss Friday night vs the Braves. Strasburg ran into trouble in the 7th inning allowing two singles, a run to each via an error and a 3-run home run in the 6th before departing. Owners will want to check in on Strasburg tomorrow, as he was strangely lifted in the middle of an at bat following an 82-mph curveball to Ender Inciarte. He has had a solid season to this point, sporting a 3.20 ERA, 10.38 K/9 and .213 batting average against. His HR/9 (1.25) is nearly double last seasons (.67) but with home runs seemingly a more frequent thing throughout the game this year the large increase may be a little less harmless.

Zach Wheeler (SP-NYM) Wheeler tossed a quality start Friday, throwing 6 innings allowing 2 runs on 7 hits while walking 2 and striking out 4. Wheeler cruised through 6 innings shutting out the Cubs, but then allowed back-to-back singles and was lifted from the game as the Cubs promptly scored 3 to take the lead. Wheeler's surface numbers do not look very favorable (5.14 ERA, 1.36 WHIP) but that seems to be a product of his inconsistency as he has alternated strong starts with weak starts for the better part of the season. He has allowed the following in terms of earned runs over the past 8 starts: 2, 4, 1, 6, 1, 8, 2, 4. If he can string together several quality starts in a row he should become a more valuable fantasy asset. He will have a chance for 2 strong starts in a row next time out vs the crosstown rival Yankees next Friday.

Trevor Richards (SP-MIA/AAA) Richards had another strong effort for Miami's AAA squad, the New Orleans Baby Cakes picking up the win tossing 6 innings of 4-hit 1-run ball while striking out 4. Richards has had a nice run at AAA this year, posting a 3-2 record with a 2.06 ERA, 0.89 WHIP and 37 strikeouts in 39 and 1/3 innings. He wasn't quite able to match those number during his cup of coffee with the Marlins in posting a 4.94 ERA over 23 and 2/3 innings. He struggled with command at times, but Marlins fans should remember his 4 and 2/3 innings of 1 hit - 10 strikeout ball he threw in his last start before being demoted and should be in line for a call should the Marlins need a starter in the near future.