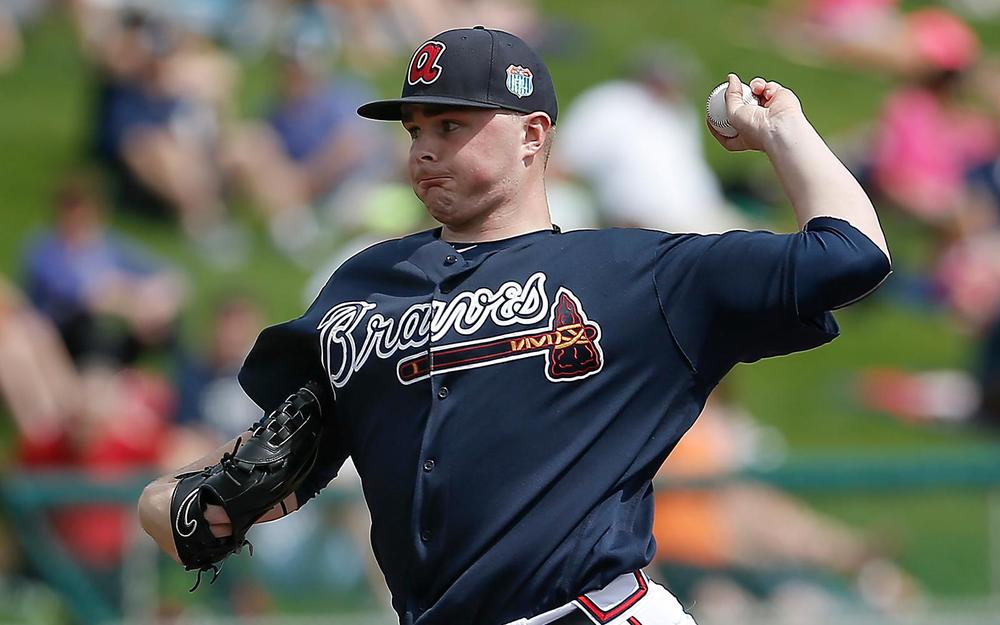 Sean Newcomb (SP-ATL) endured a rough outing against the Brewers on Sunday, lasting just four innings in which he coughed up five earned runs on a dozen hits and two walks while whiffing just two. After struggling in July prior to the All-Star break, Newcomb seemingly went on a tear to start the second half, as he boasted a 1.31 ERA and 0.82 WHIP over 20.2 innings in which he struck out 19 while walking seven. However, the peripherals indicated that he benefitted from a lot of luck, as he had a 4.08 xFIP during that same stretch; a 98.6% strand rate and .167 BABIP allowed suppressed his surface numbers. The 25 year-old Newcomb is clearly a talented pitcher who should be a reliable fantasy starter for years to come, but Sunday's outing serves as a reminder that there is some volatility that comes with a guy who tends to walk a lot of batters (he has a 4.23 BB/9 overall this season) and hasn't shown an ability to consistently use his strikeout potential to get out of jams. I would expect his ERA to climb toward his 4.36 xFIP and 4.53 SIERA as the season winds down.

Brian Dozier (2B-LAD) batted leadoff against the Rockies on Sunday, going 2-3 with two walks, two RBI, and two stolen bases. After batting a dismal .227 in 104 games with the Twins (.307 OBP), he's now hitting .286 (.444 OBP) in his first 11 games with the Dodgers. He started to heat up in July, posting a .257 average with five homers, 21 RBI, and three stolen bases, building on that in August with a .286 average, three dingers, and nine RBI. A great sign that he might just be turning things around is his 10:7 BB:K rate in August, as he struck out a good bit more than he walked during each month before that. Overall, Dozier isn't striking out much more than he has in the past (20.3% this season, 19.6% career) and he's walking just as often as he did last season (11%), although his power is down (.192 ISO this season, .227 last year and .278 during his career year in 2016) and his BABIP is down a tad to .258 (.274 career). His hard-hit rate (35.7%), moreover, is actually a little higher than in years past (34.1% last season, 34.7% in 2016). So, Dozier's rebound with the Dodgers is likely legit; perhaps he's this year's version of Justin Verlander - a struggling although established veteran reenergized by a move from a losing franchise to a contender.

Marcel Ozuna (OF-STL) went 2-5 with a double, an RBI, and two runs scored against the Royals on Sunday. The 27 year-old slugger's first season in St. Louis has been disappointing, as he is now batting .272 with just 13 home runs, and 62 RBI across 483 plate appearances. Despite boosting his hard-hit rate to an excellent 45.1% this season, Ozuna has recorded an ISO of just .125, which would be his lowest since 2015 and well below his career ISO of .174 (and wayyyyyy below his .237 from last season, when he launched 37 homers). This likely has something to do with his affinity for hitting grounders (48.4%) instead of flyballs (just 33.5%), which is a career-long trend (47.1% and 33.7% career, respectively); with that in mind, his 2017 production looks more and more like an outlier. I'm not sure that many expected a repeat of last season's breakout campaign, but it's difficult to envision Ozuna even surpassing the 23 homers that he hit in 2014 and 2016.

Dereck Rodriguez (SP-SF) moved to 6-1 in his rookie season with a win over the Pirates in which he gave up just one earned run on two hits and one walk while striking out four over seven innings. Although he was never highly regarded as a prospect, Pudge Rodriguez's kid has put together a fine 2.25 ERA and 1.00 WHIP across his first 80 big league innings (12 starts and 2 relief appearances). But with a 3.99 xFIP and 4.07 SIERA, one has to wonder how much longer the magic will last. Although he maintains a modest BB/9 of 2.14, he doesn't strike out many batters (7.31 K/9) and opposing batters have amassed just a .251 BABIP against him; his strand rate seems a tad high at 78.1%, too. The 43.4% hard-hit rate that opposing batters have recorded against him is alarming, especially since he tends to pitch to contact and has a low-90s fastball (thrown 52% of the time). Although he calls spacious AT&T Park his home, his 5.3% HR/FB and 0.45 HR/9 are both likely to see some correction to the mean.

Zack Godley (SP-ARI) earned the win against the Reds by tossing 6.2 innings in which he allowed 2 runs (1 earned) on 6 hits and 1 walk while punching out 6 hitters. The 28 year-old is turning around what has been a disappointing season in which he now has a 4.20 ERA and 1.42 WHIP after posting a 3.37 ERA and 1.14 WHIP during his sophomore campaign in 2017. He entered his July 31st start against the Rangers with a 4.73 ERA, but has rattled off three consecutive starts in which he has allowed a total of 3 earned runs on 13 hits and 3 walks while striking out 23 over 21 innings of work. Although the overall numbers are still unimpressive, there are several encouraging things to note in his profile. For one, Godley's struggled with the walks this season (4.01 BB/9 overall this year after recording a 3.08 BB/9 last season) but has only walked one batter in each of his last four outings. Second, after struggling with the longball early this season (allowing a total of 12 during the first three months of the season), he hasn't allowed any in July or August. Third, he has maintained a strong strikeout rate, as his 9.39 K/9 isn't far off the 9.58 that he logged last season. Finally, his 3.86 xFIP indicates that there is still some room for improvement for Godley going forward this season.