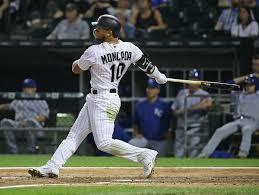 Yoan Moncada (2B) - One of the biggest profit centers from the draft season through the first three weeks of the season is undoubtedly Yoan Moncada. Moncada's 2018 underlying metrics were eerily similar to Javy Baez, but due to a little more misfortune, Moncada ended up with a 10th percentile outcome while Baez ended up with a 90th percentile outcome. Entering Wednesday's game, Moncada has already made great strides in his plate approach, cutting his strikeout rate from 33% down to 24% and raising his contact rate up 5% to 75%. Interestingly, despite the big strikeout rate improvements, he has maintained a swinging strike rate near 12% and his batting EYE has fallen to .23 down from .31. Additionally, his in-zone swing rate is up and his chase rate is up, but none of those negatives are bleeding through since he's largely hitting the ball in the zone at a much higher frequency (86% in zone contact rate) and when he is making contact, he's been hitting it harder, as evidenced by his 45% hard hit rate. Moncada's HR/FB rate jumps off the page at 24%, more than double his previous rate, but it's important to realize it's because he's also hitting his fly balls harder with a 52% hard hit rate on his flyballs compared with just a 37% rate last year. All in all, the power surge is absolutely real and his approach changes seem promising, particularly in terms of the contact rate, but the headwinds in chase rate, swing rate, and swinging strike rate do flag him as a potential over-performer in his batting average department.

Jurickson Profar (OAK) - It remains a little too early to draw concrete conclusions on BABIP, but Jurickson Profar seems to be one of the early season favorites for "most unlucky". Profar has just a .186 BABIP despite a hard hit rate around 36% after managing a .286 BABIP on a 37% hard hit rate in 2018 and his singles % is a pitiful .145. At this point in the year, it will only take a handful of hits to fall for his luck to reverse and when it does, Profar will suddenly look like an attractive multi-position eligible fantasy player again since he already has a pair of home runs and 3 stolen bases through his first 19 games.

Tim Anderson (CWS) - Tim Anderson has been one of the most valuable middle infielders in all of fantasy baseball up to this point in the year. Anderson has already logged 6 stolen bases while scoring 12 runs, popping 4 home runs and slashing .424/.443/.678 (along with a heck of a riot-inducing bat flip). Obviously the batting average will come down, but how sustainable is his early season performance? In short, it's not. The BABIP Gods have largely looked upon Anderson with favor, allowing half his batted balls to fall for hits. The good news is that the White Sox seem content letting Anderson have the green light on the basebaths. His 23% HR/FB rate will absolutely fall and isn't remotely close to being supported by his 24% hard hit rate.

Elvis Andrus (TEX) - Elvis Andrus has been one of the few true 5-category contributors in the MLB this year, stuffing the stolen base and runs scored categories, as usual, but also providing a surprising amount of power and batting average. There's been a distinct change in approach for Andrus, who went from a patient, contact-oriented hitter in 2019 to an aggressive, line-drive bat so far in 2019. His swinging strike rate has sky-rocketed from 9% in 2018 to 12% in 2019, while his contact % has fallen from 81% down to 74%. This trade of contact for power is best highlighted by his hard hit rate improving from a below league average 34% in 2018 to an elite 47% in 2019. The question isn't whether or not what he's doing is real, because it is, the question is whether he will continue to take this approach. If so, he will end up as one of the biggest surprises of the year.

Justin Smoak (TOR) - For all the criticism the Blue Jays' offense has received, first baseman Justin Smoak continues to post respectable numbers. His 21% walk rate and 16% strikeout rates are easily the best of his career, as is his 42% hard hit rate. Smoak does have a pair of home runs, but power should continue to rise given his HR/FB rate is sitting about 2.5% below his average career mark, meaning his extra hard hit percentage has yet to benefit his flyballs. That will change and so will his value. He's a great power target since his additional changes in approach should also help him maintain a respectable batting average.