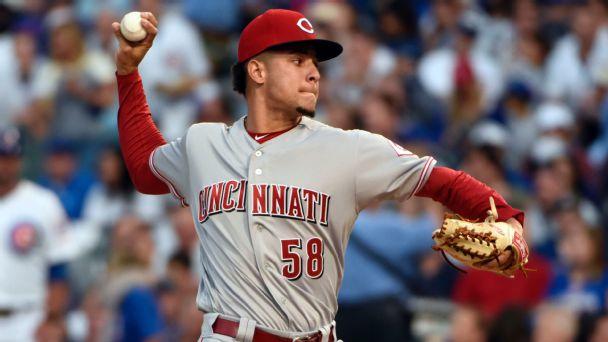 Smith continued his surprisingly impressive 2019 campaign Thursday night as he tossed 6.0 innings and gave up just one run against the Phillies. He ended with eight strikeouts and only allowed four baserunners (3 H, 1 BB) on the evening. Smith now owns a sparkling 2.17 ERA and .83 WHIP through five starts this season. Dating back to the beginning of last season Smith has an ERA of 3.77 and FIP/xFIP of 3.63/4.08 over 100.1 innings. His season FIP/xFIP stands at 3.11/3.47, which is good for 19th, and 21st respectively, amongst qualified major league starters this season. So Smith certainly has impressed thus far, but possibly the most impressive thing about this southpaw is that he has been incredibly consistent. He has gone 5.0 or 6.0 innings and hasn't given up more than 3 runs, or struck out less than 6 batters, in all five of his starts this season. That kind of consistency is impossible to find on the waiver wire, yet Smith is still available in 49.3% of ESPN leagues.

Walker continued his amazing 2019 season with a pair of doubles against the Pirates. He finished the day 2 for 4 with a run and an RBI. Walker is currently the most picked up position player in ESPN leagues (+25.7% +/-) and is now owned in 44.8% of leagues. The craze over him is well founded as he is batting .341 with 7 home runs and owns an .OPS over 1.000. However, the First Baseman's lack of plate discipline is concerning (8.6 BB% and 29.0 K%) and many of his underlying stats are probably unsustainable. Walker has posted a ridiculous .431 BABIP and .353 ISO so far in 2019 which rank 2nd, and 13th respectively, across the majors amongst qualified batters. With such a high K% Walker has to be very successful when he does put the ball in play, which he has so far, but those are very difficult numbers to sustain across an entire season. Walker has been impressive thus far, and Arizona is a good place to hit, so Walker should have some value for the rest of 2019; but considering he plays 1B, he probably isn't more than a streaming/replacement option at this point.

Pollock's struggles continued on Thursday as he went 1 for 4 with a single and three strikeouts on the afternoon. The new Dodger is batting .190 with an ISO of .103 over his past 15 starts and his season slash line is now at .240, .299, .354. So far in 2019, Pollock has been unable to get the ball off the ground (49.4% GB%) and has been striking out more than normal (his 18.7% K% is 2.5% higher than his career average); and as a result, Pollock owns a dreadful .282 wOBA and 76 wRC+. Now that his base stealing days seem to be behind him (zero so far), Pollock's upside appears quite limited. He has shown some power in the past (20+ homers in '15 and '16), but he owns a lifetime GB% of 47.5% and is now getting older (31)--which is especially concerning when you consider his injury history. Pollock has proven himself worthy with the stick (.279 career average), but it appears his best days are behind him.

Teheran had a quality start (6.0 IP, 3 ER) against the Reds Thursday, but was strapped with his 3rd loss of the season. He struck out 7 batters while giving up 6 hits and walking 3 on the evening. Teheran has been incredibly inconsistent all season and it seems be stemming from his lack of control. His 2019 BB/9 of 4.83 is well above his career average of 2.89. Teheran's walk rate has increased each of the last two full seasons and it's on its way to being a third consecutive season here in 2019. In 2016 (his last solid season) Teheran's BB% was 5.4% and his ERA was 3.21; since then his BB% has steadily increased (12.0% so far in '19) and his ERA has continued to balloon along with it. His 2019 ERA is now at 5.40 and his WHIP is an alarming 1.58 (primarily due to the walks). Teheran is a border-line fantasy player (rostered in 43.4% of ESPN leagues) that you can probably forget about unless he miraculously improves his control issues.

In his third game off the IL, Polanco went 0 for 4 with a pair of strikeouts. The Pirates outfielder gathered a pair of hits in each of his first two games, but was stymied by Zack Greinke and the D-Backs bullpen on Thursday afternoon. Despite battling injures, Polanco managed to have a breakout season in 2019 that saw him post career highs in almost all major statistical categories. Most notably, he hit 25 Home Runs to go with a .839 OPS and a solid 11.4% BB%. Polanco's K-rate was elevated (21.9%), but considering that he is transitioning into more of a power hitter that shouldn't be too much of a concern. His FB% of 48.0% a season ago was exactly 10.0% higher than his career average of 38.0%, which definitely suggests he is trying to get the ball into the seats with more regularity. The results of Polanco's attempt at improving his power last season were quite fantastic and his ISO of .245 was proof of that. He is certainly a risk, mainly because of his injury history, but he's only owned in 29.0 % of ESPN leagues and should produce solid power numbers (also has 38 SB since 2016) if he can stay healthy.