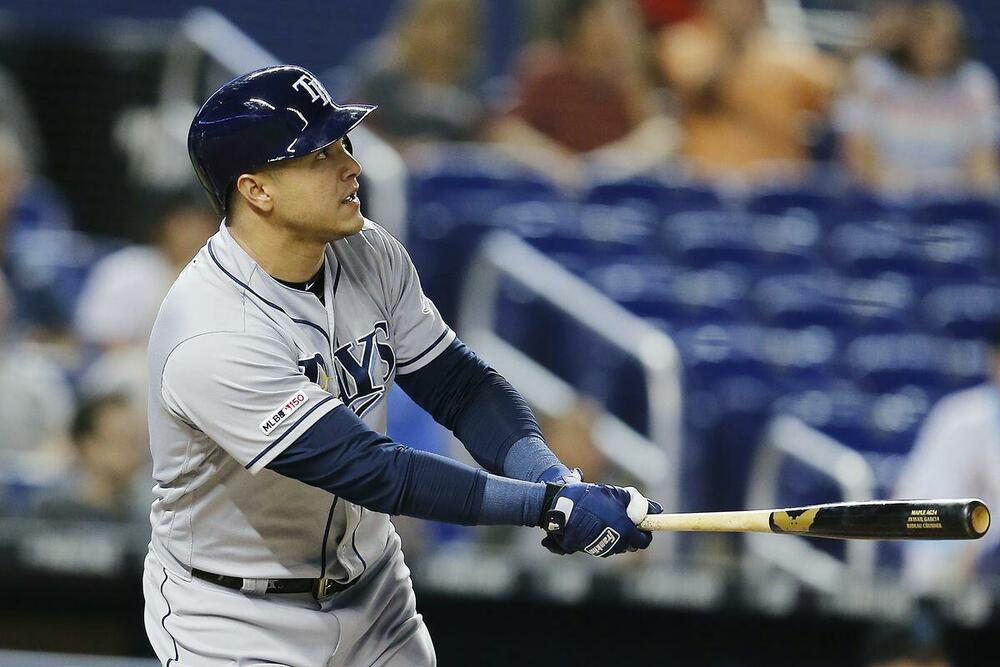 Avisail Garcia (OF-TB) stayed hot on Thursday against the Twins, going 3-4 with a double, a walk, an RBI, and 3 runs scored as he led off. Entering the contest, he was hitting .341 with 6 homers, 14 RBI, and 4 stolen bases across 85 May plate appearances. Thanks to the hot month, the 27 year-old is now batting .301 with 10 longballs, 25 RBI, and 6 steals on the year, with a career-high 44.5% hard-hit rate and 22.1% strikeout clip that clocks in just below his 23.3% career rate. Garcia's 21.7% HR/FB compares favorably with the 21.3% he recorded in Chicago last season while his .351 BABIP isn't considerably higher than his .331 career clip. So long as he can stay healthy, this could finally be the breakout we've been waiting for. He's currently available in nearly 90% of ESPN leagues.

Yoan Moncada (3B-CHW) continued his solid 2019 campaign on Thursday, going 2-5 with a double and an RBI against Cleveland. A year after batting just .235 and whiffing in over 1/3 of his plate appearances, Moncada is now hitting .280 with an improved 29% strikeout rate through 238 appearances in 2019. Even though he's been hitting near the top of the Sox lineup, his walk rate is down significantly (to 6.7% from last year's 10.3%) while he's only flashed his plus-plus speed with 5 stolen bases (caught 3 times). Meanwhile, he's seemingly taken his power to the next level, recording a .211 ISO (.164 last year) en route to hitting 10 homers (he hit 17 all of last season). That may not stick, though, as his hard-hit rate is up only .5% to 37.2% while his flyball rate is down 8.1% to 32%, giving him an elevated 21.3% HR/FB that probably isn't sustainable. Yet, he's become much more of a pull hitter (up nearly 6% to 47.3%) and does possess 60 raw power that he recently used to go yard the opposite way. So, yes - Moncada has improved in some ways. But I'm not convinced we can take the surface numbers at face value just yet.

Eloy Jimenez (OF-CHW) beat up Carlos Carrasco and the Indians on Thursday, going 3-4 with a double and a pair of RBI. The performance raises the 22 year-old rookie's season average to .225 while he now has 9 extra-base hits (6 homers) and 13 RBI through 128 plate appearances. Uncharacteristically, the strikeout has been a significant problem for Jimenez so far in the majors, as his 29.7% strikeout rate far surpasses anything he posted in a meaningful sample size in the minors (never above 20.3% in more than a 100-plate appearance sample); so, it's encouraging that he didn't whiff at all on Thursday. Also problematic, though, has been his anemic 26.9% hard-hit rate and elevated 24.4% soft-hit rate, an interesting development given his size and prodigious power. But Jimenez is still acclimating to big-league pitching, so it's too early to write him off, even for 2019. If he's been dropped in your league, he's worth a speculative add in case he settles in.

Carlos Carrasco (SP-CLE) labored through 6.1 innings of work against the White Sox on Thursday, surrendering 6 runs on 10 hits and 1 walk while striking out 7. The 32 year-old now owns a 4.98 ERA on the year, which his 3.32 xFIP says is pretty unlucky. While his 20% HR/FB and the .349 BABIP that opposing hitters have posted against him both seem due for some regression, he's given up hard contact at a 41.7% rate, with batters hitting 21.9% liners and 40% flyballs while pulling the ball 47.2% of the time. Yeah, that's a recipe for a lot of longballs. Otherwise, his 10.94 K/9 and 1.52 BB/9 are both excellent, with both representing career bests. Know who he feels a bit like this year? 2018 Nick Pivetta. The peripherals say he should be doing better, but he alternates excellent outings with clunkers in which he gets shelled.

Martin Perez (SP-MIN) absolutely struggled against the Rays on Thursday, lasting just 2.2 innings in which he surrendered 6 runs on 6 hits and 2 walks while fanning 3. The 28 year-old now owns a 3.71 ERA on the year, which highlights how well he was doing prior to Thursday's clunker. But Perez's xFIP did sit at 4.38 entering the contest, and the Rays are a quality opponent - so there were signs that regression to the mean was coming. While it is encouraging that his K/9 is up to 8.75 from a mere career 5.69 clip in 2019, that improvement has been accompanied by a rising BB/9, as that figure sits at 4.15 this year (3.25 career). Moreover, his 4.59 SIERA entering Thursday's game was only a slight improvement on his career 4.75 SIERA. So, Perez is lining up to be a 4.30 ERA guy this year instead of his usual 4.50. Yay? I suppose that's good enough for the back end of the fantasy rotation for spot starts.