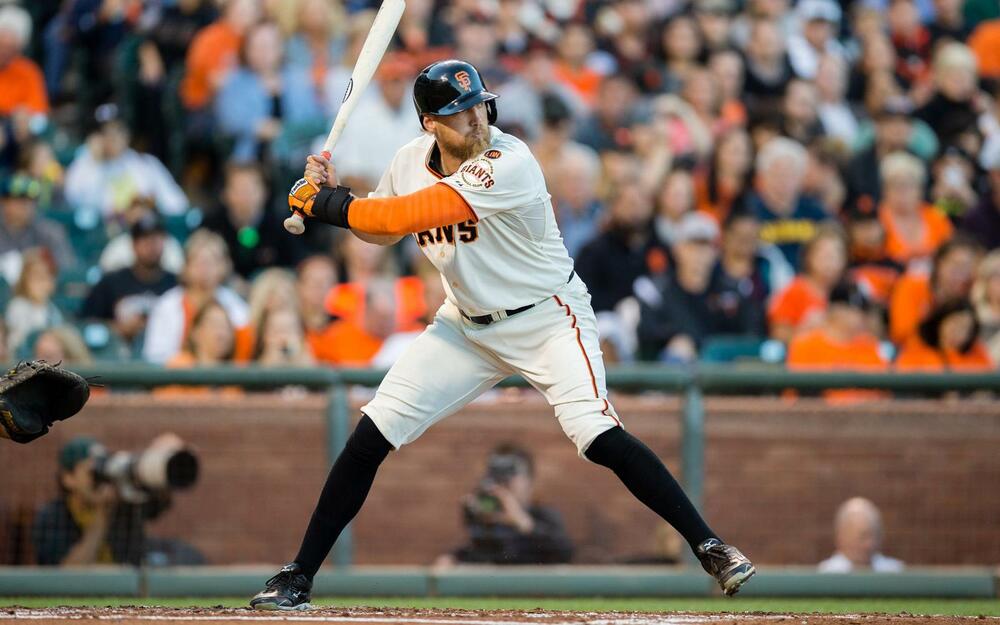 OF Justin Upton has been cleared to resume running as he recovers from a toe injury. He is not expected back until June. This gives OF Brian Goodwin a chance to compete with OF Kole Calhoun for regular playing time once Upton comes back. Goodwin has been good to start the year (.311/.388/.500) compared to Calhoun's (.223/.315/.485). DH Khris Davis left Tuesday's game early with due a hip injury he suffered on May 5. He was not in the lineup May 9/10 either. OF Bradley Zimmer has progressed to full baseball activities. If he gets healthy and hits on his rehab assignment there is going to be a regular role for him at the major league level. 2B Dee Gordon was hit on the wrist on Thursday and was not in the lineup on Friday. He is considered day-to-day at this point. 3B Kyle Seager is nearing a rehab assignment and could be back before the end of the month. The Mariners called up 2B Shed Long and SS J.P. Crawford in case Gordon's and 1B Edwin Encarnacion's injuries are more serious than initially thought. OF Mark Trumbo has started baseball activities and could be back by the end of May. 1B Ronald Guzman was activated this week and the Rangers corresponding move was to demote OF Delino DeShields Jr in order to keep 2B Danny Santana and 1B Logan Forsythe on the roster. The other factor to consider is that this means that 1B/OF Joey Gallo is going to play CF everyday so Gallo owners need to keep their fingers crossed that this does not lead to an injury to the physicality of the position. C Mike Zunino was placed on the 10-day IL with a quad injury and is expected to miss 3-4 weeks. C Michael Perez was placed on the 10-day IL which resulted in the Rays trading for C Travis d'Arnaud. 2B Brock Holt and 2B Dustin Pedroia have started rehab assignments. It will be interesting to see what the Red Sox do with their infield once both return but rookie 2B Michael Chavis has earned a full time role with the way he has swung the bat so far (.279/.405/.607) with 6 HR in 74 PA. 2B Jose Altuve left Friday's game with a leg injury and is considered day-to-day but it seems likely that Altuve will need an IL stint. 2B Josh Harrison was sent on a rehab assignment on May 9th. Harrison has not been good (.156/.212/.233) but he does offer some fantasy upside with the potential to go 10 HR/10 SB the rest of the way. SS Jordy Mercer was placed on the 10-day IL with a right quad strain. This means that SS Ronny Rodriguez is going to be the everyday shortstop. Rodriguez has shown upside so far with a .323 AVG with 3 HR/1 SB in 15 games. The underlying skills are solid as well with 20% K, 7% BB, and 51% Hard. C Willians Astudillo has been able to perform baseball activities and could be activated soon. 3B Miguel Sano was sent to Triple-A to continue his rehab assignment and could be back late next week. He would slide into 3B with UTIL Marwin Gonzalez going back to his utility role since he is not performing (.206/.286/.280). OF Eloy Jimenez is expected to begin a rehab assignment next week. 1B Greg Bird has his walking boot removed and is still on track for a return for a mid June return. 1B Luke Voit has taken the job and ran with it (.248 AVG, 10 HR, 24 R, 30 RBI). SS Didi Gregorius is progressing and could begin extend Spring Training at the end of the month. OF Aaron Hicks could return this week which would be a nice upgrade for the Yankees and fantasy owners. OF Aaron Judge and OF Giancarlo Stanton are not close to returning so the Yankees will continue to run OF Brett Gardner and OF Clint Frazier out there on a regular basis with OF Mike Tauchman and OF Cameron Maybin filling in until Hicks is back. 1B Matt Olson was able to come off the IL and has been hitting 5th which is going to provide him with ample opportunity to drive in runs. The Rays sent down 1B Nate Lowe when OF Austin Meadows made his way back. This means that 1B Ji-Man Choi is going to continue to hit against RHP. OF Nomar Mazara has been losing playing time against LHP in favor of OF Hunter Pence which is not good for his ROS of season value. Mazara needs to get as many plate appearances as possible in order to accumulate counting stats.

Andrew Heaney (elbow) threw to live hitters on Friday. He is getting closer a rehab assignment and could be back before the end of May. Clay Buchholz (shoulder) was placed on the 10-day IL with shoulder inflammation. Buchholz was struggling (6.57 ERA and 1.54 WHIP) before going on the IL. Mike Clevinger (upper back) continues to throw and has progressed to 90 ft. and is expect back mid to late June. Danny Salazar was shut down from throwing on May 4 and at this point it would be a huge surprise if he throws another pitch at the major league level. Tyler Glasnow left Friday's start after 5.1 IP, 3 ER, and 9 K with a tight right forearm and is expected to miss 4-6 weeks with the latter being most likely. David Price (elbow) was placed on the 10-day IL with left elbow tendinitis. He is expected to return next week if everything goes as planned. There has been no update on LHP Carlos Rodon's injury status but it is widely believed that his season is over. James Paxton (left knee) is throwing and could be back by the end of May. Jonathan Loaisiga will fill in and makes for a nice speculative play until Paxton is back. Colin McHugh has been sent back to the bullpen and the Astros called up Corbin Martin to take his place. Martin needs to be owned across all formats.

Hunter Strickland (lat strain) has been cleared to begin throwing on May 13 but is still a long way from returning to a major league mound. The Mariners will continue to try the likes of Anthony Swarzak and Roenis Elias in the meantime. On Friday night, Swarzak entered the game in the 5th inning with the Mariners down seven runs. This could mean that Elias or Brandon Brennan could see future save opportunities. Shawn Kelley has been placed on the 10-day IL with a bacterial infection. This leaves the closer's door open for Jose Leclerc to take his job back. It also gives an opportunity to Chris Martin in the interim. Dellin Betances was transferred to the 60-day IL on May 9. The Rays bullpen situation is still a mess with no clear closer but a committee of Diego Castillo, Jose Alvarado, and Emilio Pagan. Hansel Robles has become the Angels closer with Ty Buttrey being used in high leverage situations.

SS Ronny Rodriguez (DET)- Ronny Rodriguez has found an everyday role in Detroit with the rash of injuries to their middle infield. He has a .323 AVG with 5 HR, 12 R, 14 RBI, and 1 SB in 16 games. Rodriguez has been making a ton of hard contact (50%) and has a good track record in the minors. In 2017 he hit 17 HR and stole 15 bases at Double-A and then between Triple-A and the majors last year it was 14 HR/12 SB. Now that he has regular playing time he is worth an add in mixed leagues.

SP Chris Bassitt (OAK)- Chris Bassitt has been very good through four starts. He has a 2.55 ERA and 0.97 WHIP through 24.2 IP. Bassitt has also shown the ability to miss bats with 32% K and 12% SwStr. It is a small sample but in today's environment you cannot wait on a larger sample and you need to take action on someone displaying the skills that Bassitt is right now. He pitches in a great home park for pitchers and has a good defense behind him.

SP Lucas Giolito (CWS)- Lucas Giolito has shown enough skills growth this year to make him fantasy relevant again. He has picked up some velocity on his fastball and made a change to his pitch mix which have produced good results. On the year he has a 4.06 ERA and 1.29 WHIP over 31 IP. The biggest growth he has shown is the increase in strikeouts (29%) which has also come an increase in his swinging strike rate (12%). His advanced metrics like SIERA (3.99) like him to continue what he is doing despite the high walk rate (12% BB). If he could slowly improve his control we could be looking at a breakthrough season for the 24-year-old right-hander.

C James McCann (CWS)- James McCann has played himself into the starting catchers role in Chicago pushing Welington Castillo to the bench. McCann is hitting .350 with 4 HR, 13 R, 10 RBI, and 2 SB. With the barren waste land that is catcher McCann has become one of the top options in the early going. He's not going to hit .300 the rest of the way but he's got a career high exit velocity (90.6 mph) and barrel% (10.2) which points to a .270 xBA. McCann needs to be owned in all formats at this point.

SP Corbin Martin (HOU)- Corbin Martin not Forrest Whitley got the call up with Colin McHugh being sent back to the bullpen. Martin has pitched extremely well at Triple-A. He has a 1.48 ERA and 1.03 WHIP across 24.1 IP. He was missing bats as well with 30% K and 13% SwStr. Martin also does a nice job of limiting hard contact with 47% GB. He needs to be owned across all formats given his pedigree and the Astros success with pitchers.