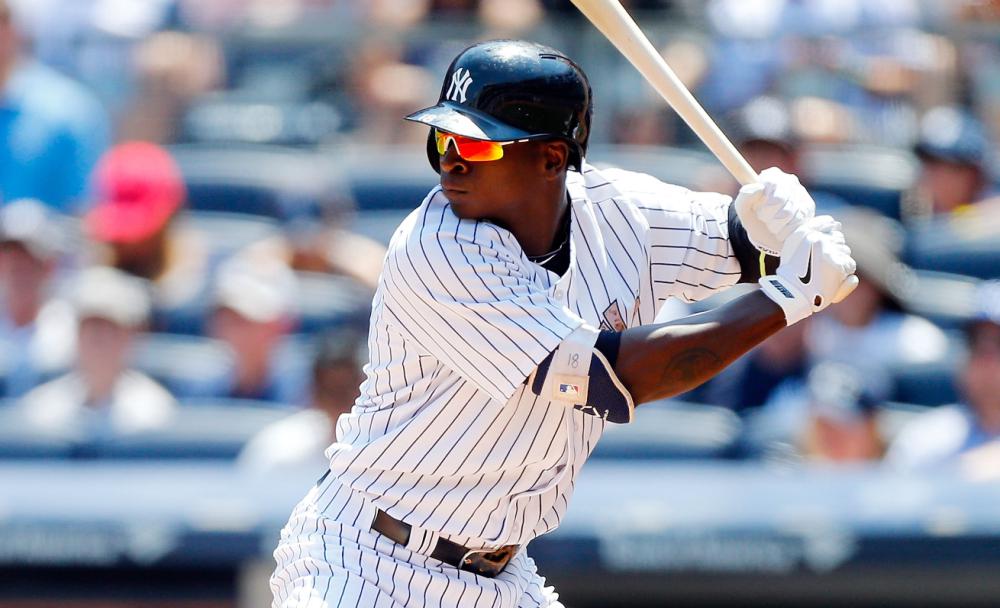 Gregorius went 2-5 with a double and a run scored in the first game of a doubleheader against the Mets on Tuesday before sitting out the nightcap. Gregorius definitely hasn't shown any lingering effects from the Tommy John Surgery he had in 2018, as he's now 6-14 with a double and a HR since returning to the Yankees lineup. The Yankees said that he would probably sit out a couple of games per week initially upon his return, and indeed he hasn't started 2 of the team's 5 games since being activated. Even so, Gregorius can provide plenty of fantasy value due to his excellent contact ability (13.3% K% in 4+ seasons with the Yankees) which gives him a solid BA floor, and blossoming power (52 HR's in 2017-18). He should also have plenty of opportunities for runs and RBI given his place in a strong Yankee lineup. He could very well be a top-10 SS from here on out and he's still available in nearly half of ESPN leagues.

Jurado allowed 3 ER's in 6 IP against the Red Sox on Tuesday, marking his 4th consecutive QS since moving into the Rangers' rotation. He has an impressive 3.02 ERA for the season (14 ER's in 41.2 IP) but it's fair to point that he has also allowed 7 unearned runs this season. To his credit, he's been great at getting groundballs (50.8% GB%) but his 7.34 K/9 is rather weak and his 4.25 xFIP points to significant regression. There are probably SP options available on the waiver wire.

Means allowed just 1 ER on 4 hits in 5 IP against the Blue Jays on Tuesday, lowering his ERA to remarkable 2.60 through 15 appearances (11 starts) this season. Means continues to defy the odds, as his ERA is over 2 runs lower than his 4.94 xFIP. He has done this thanks to a .251 BABIP that has allowed him to overcome a mediocre 7.81 K/9, and the low BABIP is primarily the result of an extremely low 14.0% LD%. The problem is that LD% is one of the hardest stats for a pitcher to keep down consistently, which makes it hard to believe that Means can keep doing this forever. He will have to crash down to earth at some point, especially considering his unfavorable home park. At least that's what one would think.

Olson homered for the 3rd time in 5 games against the Rangers on Tuesday, giving him 10 HR's in 35 games played this season. Unfortunately for Olson, those were also his only 3 hits in the last 5 games. Olson has become expected to be a high power/low average guy, as he hits tons of FB's (53.8%) and hits the ball hard (51.9%) but also strikes out a lot (28.2%). His 12.1% SwStr% isn't that high above average though, so perhaps we'll see a bit of improvement to his K-rate. Even if we don't, the power is enough to make Olson worthwhile in most fantasy leagues.

Tanaka allowed 5 runs (4 ER's) in 6.2 IP on Tuesday, while striking out 7 in a win over the Mets. After posting a sparkling 2.94 ERA through his first 11 starts this season, Tanaka has now allowed 4 ER's in each of his last three outings, raising his ERA to a still solid 3.58 for the season. He hasn't actually been that terrible over his recent stretch, compiling a 16:4 K:BB in 18.2 IP over those three starts. Those are pretty similar strikeout and walk rates to what he was doing earlier in the year. Tanaka was due for some regression and regression has come, but don't take this to mean he's falling off a cliff. Things are just evening out to where we would expect them to be.