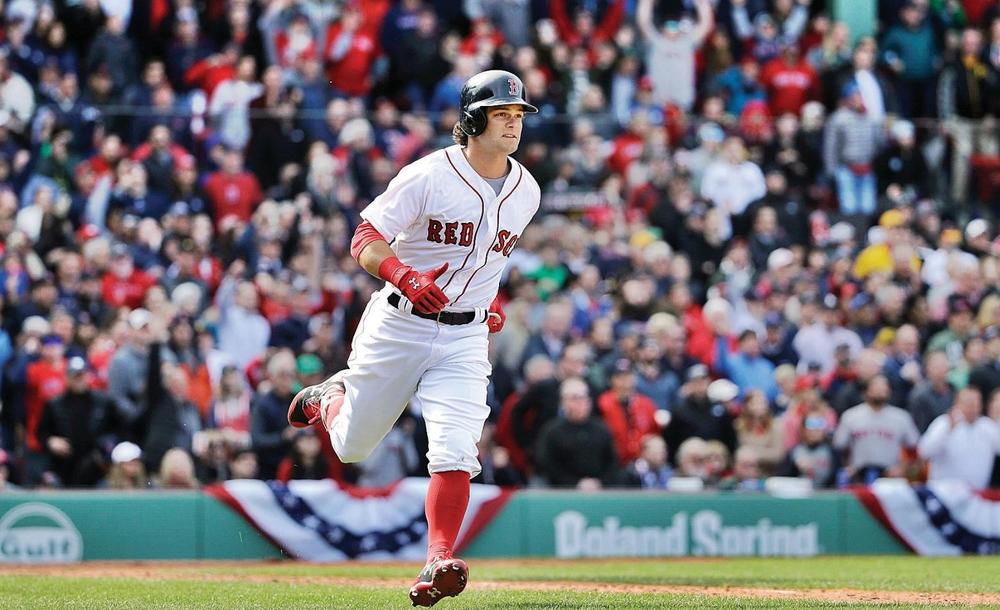 Andrew Benintendi (BOS) - Andrew Benintendi took it upon himself to make sure the Red Sox wouldn't fall below .500, going 3-for-4 on the afternoon. Benintendi started the day with a first inning double to put Boston on the board before adding a triple in the third and another double in the fifth. The effort rose the lefty's slash line to .270/.360/.443 with an 11% walk rate and a 23% strikeout rate. Benintendi also has 7 home runs and 7 steals. His league average 37% hard hit rate suggests his .371 BABIP is actually artificially inflating his batting average. He's a tough player to analyze, but it certainly doesn't look like a players that's greatly under-performing is metrics.

Mookie Betts (BOS) - Mookie Betts walked the Red Sox off against the Rangers on Wednesday...literally. Betts drew the bases loaded walk to give the Red Sox the win and prevent the club from falling below .500. Boston was drafted as low as 6thoverall in the NFBC's recent second chance leagues after getting off to a relatively sluggish start, relative to expectations of him as the 2ndoverall pick. Betts batting EYE remains at an excellent 1.11, but his batting average has been significantly lacking, primarily because his BABIP of .283 has sunk significantly after his unsustainable .368 from 2018. With that said, his current BABIP is also an overcorrection, especially since his 40% hard hit rate deserves a much better return. Expect his batting average to continue to rise and as it does, the rest of his number should also fall into place.

Elvis Andrus (TEX) - Elvis Andrus remains the only player with a batting average over .300 in the Texas lineup despite hitting just .252/.265/.354 since May 1. Over that same stretch, Andrus has just 1 home run after hitting 5 in the first month of the season, although he has maintained his excellent stolen base pace, giving him 13 on the season. Andrus was bound to come back down to earth, although his hard hit rates remain elevated above his career levels. His harder hit rates over the last month will eventually translate back into power, especially when you consider that despite a HR/FB rate below 3% since May 1st,. his hard hit rate on his flyballs is an above average 45%. Regression is coming for Andrus and the pendulum will be swinging back into the green so jump board.

Yonny Chirinos (TB) -Pitching in front of usual opener Ryne Stanek, Yonny Chirinos failed to get the support from his bullpen to foil his attempt at his 8thwin of the season. The failiure wasn't due to Chirinos' performance as the pitcher twirled 6 innings, giving up 7 hits and just 2 earned runs while striking out 7. Chirinos got off to a rocky start to the season after being a trend pick late in drafts, but he has turn it around, as of late and has actually served as the starter in 4 straight games. He's worth a pickup in mixed leagues where he may have been dropped, but realize with a 10% SwStr% and an 80% contact rate, he's going to rely more heavily on his defense. That's not a bad thing, but it's something to remember when setting expectation.

Yandy Diaz (TB) -Yandy Diaz has long been a statcast darling, oozing of power potential but failing to actually tap into that potential. The biggest challenge for Diaz isn't that he doesn't have the raw game power, he does, and that can be seen by his hard hit rate on flyball, which is a healthy 53.9%. Instead, it seems to be getting loft on the ball, where he has just a 5.9 degree launch angle. For reference, league average is 11 degrees. This obviously results in plenty of groundballs (52%) and not nearly enough flyballs (31.7%). Not unlike Christian Yelich, if Diaz could change his swing path just slightly, he could see a huge boost in his power numbers.