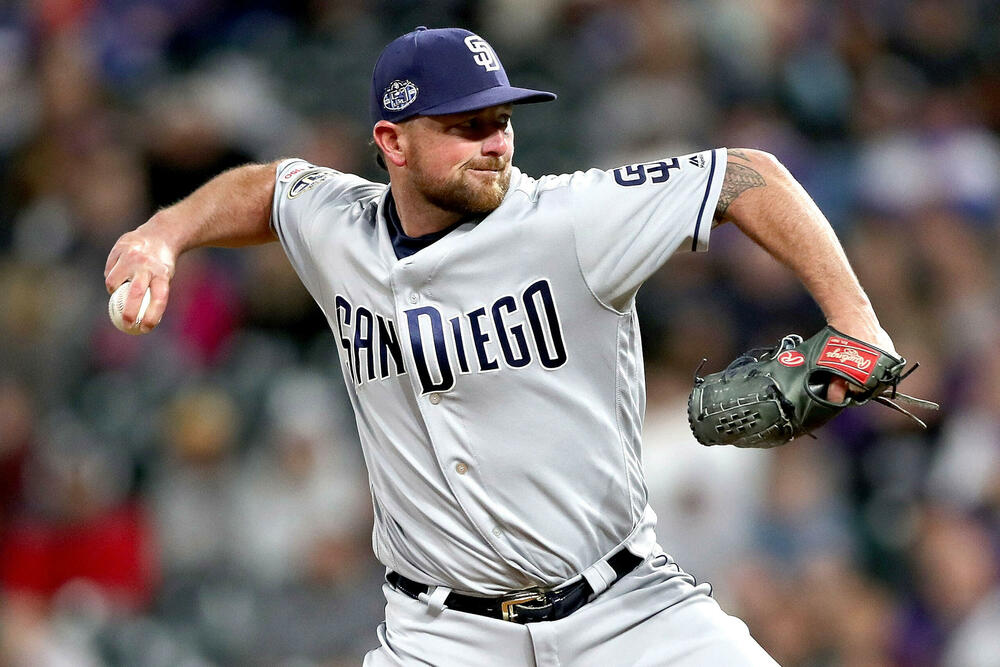 MVP: Kirby Yates - This one wasn't even close. Kirby Yates was drafted as the 11th overall closer in drafts this spring with an average draft position of 112th in the National Fantasy Baseball Championship (NFBC). The funny thing is that all of us could have seen this coming, we just chose not to believe it. My personal reason was that I didn't believe the Padres would be contenders this season, but the fact is that his swinging strike rates, chase rates, and contact rates were all elite last year. In fact, these year most of his metrics have regressed, yet he's still dominating. He's absolutely legit and he's easily the MVP.

Biggest Surprise / Best FAAB Bargain: Hector Neris - Hector Neris was only drafted in 38% of NFBC leagues this spring (386 out of 950) with an average draft position of 654. In fact, he wasn't drafted in any of the high stakes formats, including the Main Event. Nonetheless, here we are and Neris has 17 saves with absolutely elite underlying metrics, including a 17.9% swinging strike rate and 38% chase rate. As a result, his 63.6% contact rate is nearly unhittable and he has the skills to perform as one of the best closers in the second half.

Newcomer of the Year: Josh Hader (MIL) - This one sort of feels like a cop out, but technically Josh Hader was not a closer before this season, so it's only fair that the man on pace for one of the greatest seasons from a closer of all time would make this list. Sure, Hansel Robles might make a strong case, and Hader wasn't exactly being drafted late (even as a multi-inning reliever before Knebel got hurt), but there's no argument Hader is having the second best season at the position this year.

Best Draft Day Return: Sergio Romo (MIA) - I remember the pre-season analysis like it was yesterday. While most of the industry was completely ignoring the Marlins bullpen or calling it a committee, Craig Mish was adamant than Sergio Romo would take the job. Sure enough, Romo has taken the job and he's already provided more value than what you'd expect to receive from an undrafted free agent or last round fantasy pick. He's a prime candidate to be dealt at the trade deadline, so the saves pace probably won't continue for the next 3 months, but he's well deserving on the best draft day return award.

Lady Luck's Most Prized Possession: Greg Holland (AZ) -Holland has once again established himself as a solid closing option at the major league level after suffering an awful 2018 season with the Cardinals and Nationals. Or has he? There's still plenty of downside risk to Greg Holland despite his seemingly productive 14 saves. Namely, his 13.8% walk rate is the highest of his career outside of last season, while his contact rates, swinging strike rates, and chase rates are all career worsts. His below league average SwStr% in no way should be propping up his 28% strikeout rate. As the strikeouts call and his batted balls drop for hits, those extra free bases on the basepaths will burn him in the second half.

Best "Skill" Handcuff in the 2nd Half: Jose LeClerc (TEX)

-The bullpen that was once a strength for the Tampa Bay Rays has suddenly become a liability with both Diego Castillo and Jose Alvarado on the injured list. Emilio Pagan will presumably handle all the save chances until the other two return, although there is a chance the funkiness of the Tampa Bay Rays bullpen management will creep in, allowing Chaz Roe to see save chances. Nonetheless, Pagan will hold tremendous value as a standalone closer for the next several weeks and is certainly worth the pick-up if he's available in your league (which he might be).

-Despite Blake Treinen's health return from the injured list, Liam Hendricks dominance has allowed him to keep the job. We can't rule this out being a committee, but it's an interesting development since Treinen might be an attractive trade piece at the deadline if the Athletics fall out of it and decide to sell.

-Heath Hembree has seen back-to-back appearances in the ninth inning for Boston since being activated from the injured list. The team is clearly not satisfied with Matt Barnes, so Hembree is a wise handcuff at this point.

-Edwin Diaz's leash is shortening after another blown save last weekend. Mickey Callaway told reporters that he would entertain the idea of a change at closer if the struggles continued. Seth Lugo would see the save chances in that scenario and should be owned.