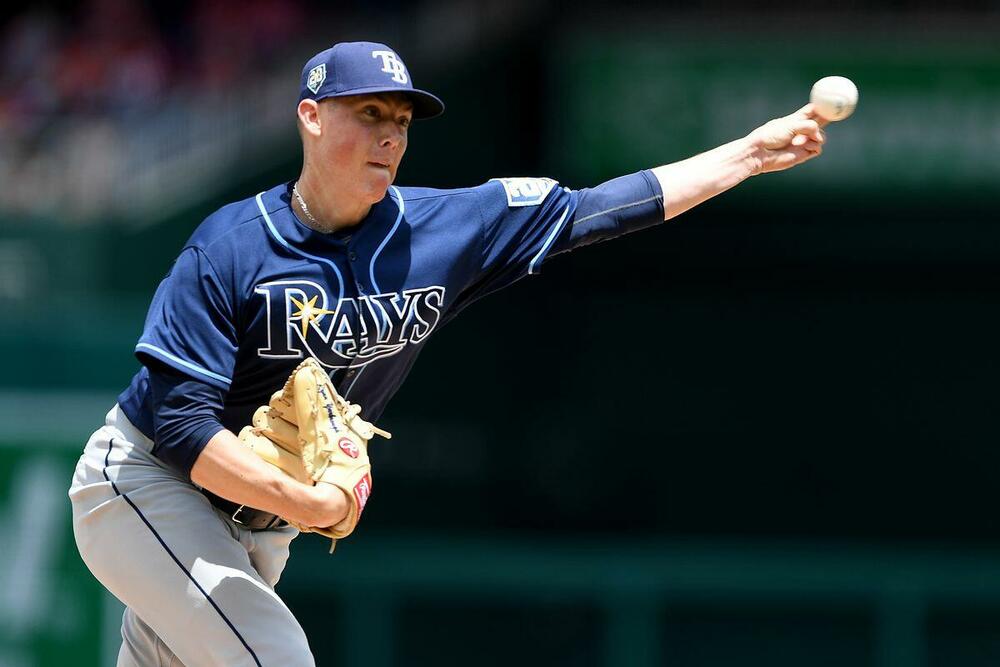 Yarbrough took a combined perfect game with Opener Ryne Stanek into the bottom of the 9th inning before giving up a leadoff single. He ended up allowing a run to score but it was a masterful effort by Yarbrough who covered 6 and 1/3 IP, allowing just 2 hits while striking out 6. Yarbrough was able to generate 12 swinging strikes in addition to inducing 8 groundballs. The effort improved his record to 8-3 while lowering ERA to 4.26 on the season. Entering play Sunday his fip (3.71) suggests he has been pitching quite better then his ERA has shown, partially due to a meager 60% strand rate. Yarbrough won't strikeout a ton of guys (6.68 K/9) but considering he lines up primarily as a bulk innings guy after the opener he always has a shot to cover big innings and rack up wins.

Santana went 1-2 with 2 runs scored 2 walks and hit his 21st home run of the season, the game winner for the Indians Sunday. It was Santana's second home run of the series and the effort raised his line to a resurgent .294/.415/.548 mark. If Mike Trout was not having a typical Mike Trout season one might argue Santana has made himself a top flight AL MVP candidate. He hit a disappointing .229 with the Phillies last year thanks to a depressed .231 babip and possibly his first taste of National League Baseball. 2019 has seen Santana return to his previous form and adding a career high 46% hard hit rate to go along with a very well rounded 21 home runs, 63 runs scores and 54 RBIs. This is all while showcasing his trademark strong plate discipline (7.2% swinging strike rate, 16% walk rate, 15% strikeouts rate). Santana should continue to be a major source of fantasy counting stats in the Indians lineup as they push towards the postseason.

Meadows went 1-4 with his 14th home run of the season. The First time All-Star who hit .350+ in both April and June scuffled to a .206 clip in June with nearly as many strikeouts in 27 June games (33) as he had through the first 2 months of the season combined (34). April and May both saw Meadows hit a high% of line drives - and that number fell sharply in June (35% LD rate in May, 18% rate in June) - a key contributor to his struggles. He has brought that number back up to 27% over a handful games in July, and as a result is hitting .304 on the month. Look for Meadows to continue to be a force in the Rays lineup - but experience his ups and down in his first full season.

Marcus Stroman (SP-TOR)
Stroman tossed 6 innings Sunday vs the Yankee, allowing 3 ER while striking out 7. He made the start despite leaving early due to a pectoral injury is his last start. Despite a 2018 that saw him post a career worst 5.54 ERA, Stroman's other numbers look startlingly similar as he had a 3.91 fip last year and currently holds a 3.81 fip this year - indicating the bloated ERA was a bit of bad luck. His K rate of roughly 7 K/9 has not fluctuated throughout his career, and he still posts an elite groundball ratio (57%). 2018's inflated ERA seems to be in part due to an inability to strand base runners, as his 60% strand rate is well below this year (72%) as well as his career mark (71%). Stroman makes for an interestingly trade candidate is the coming weeks, and despite a sub-.500 pitching record (x-x) a trade to a contender could easily even that out.

Jimenez went 1 for 4 Sunday. Jimenez mashed his 17th home run of the season Sunday and despite hitting just .222 (6-27) in the Month of July he as 3 home runs and a 5:5 BB:K ratio which is great progress for the Rookie considering he is carrying just an 8% walk rate and 27% strikeouts rate through his first 60 professional games. Jimenez has done all this damage at the plate despite hitting over 50% of his balls on the ground. Perhaps if he can hit more line drives and few more flyballs - he will not only help elevate his .277 babip and bring his average up - but he could really tap into his power potential that had been so widely touted.