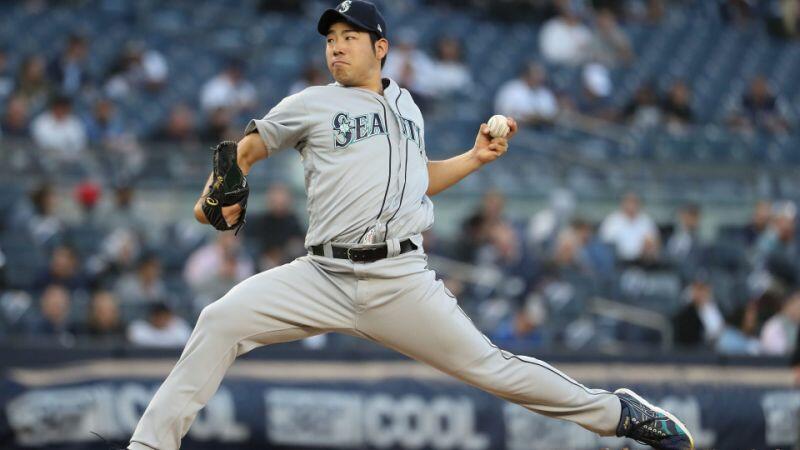 Pinder has been underwhelming for the A's this season, but the 27-year-old has made some encouraging adjustments this season and bears a look from fantasy owners. Pinder has cut his o-swing rate to 33% (which could still use work, but is an improvement from his 35.9% mark from last season) while increasing his z-swing rate to 80.7%, helping push his contact rate up to 85%. In addition to his improved plate approach, Pinder has continued to hit the ball hard and owns a 90.2 MPH average exit velocity for the season. Unfortunately, the majority of Pinder's contact has resulted in ground balls (1.13 GB/FB ratio), capping his ceiling and holding him back from what could be a strong season. If Pinder can maintain his improved plate discipline with a batted ball profile comparable to his 2017 season (0.71 GB/FB ratio, 30% line drive rate), then he should be a strong fantasy player. Pinder's ground ball rate has been trending in the wrong direction recently, but monitor it over the rest of the season and into next year.

Kikuchi allowed two runs over 6.2 innings, allowing seven hits, walking none, and striking out four against the Tigers on Friday. Kikuchi has been a disappointment for the Mariners so far this season and took a 5.37 ERA into Friday's game. Interestingly, Kikuchi has effectively abandoned his curveball this month despite Fangraphs ranking it as his best pitch -- an understandable trend when considering that the pitch was arguably the worst performing pitch in his arsenal. To replace his curveball, Kikuchi has turned to a changeup that's been as close to a strikeout pitch as the rookie owns and has limited hard contact at a strong rate. It may take a little more time, but if Kikuchi can continue to develop his changeup while building his arsenal around his changeup and slider (while ideally getting his curveball back), then he should become a fantasy asset. Kikuchi isn't going to start posting a strikeout rate above or even around 30%, but he certainly has the potential to be an effective fantasy option and should be monitored closely going forward.

Castro owns a less than stellar plate discipline profile (44.7% o-swing rate), hits too many ground balls (0.98 GB/FB ratio), and doesn't offer much in the power department (86.5 MPH average exit velocity), but the 25-year-old boasts solid contact skills (87.2% z-contact rate, 78.8% contact rate), doesn't have a real Achilles heel in terms of pitch types, sprays the ball to all fields (28.1% pull rate), and frequently hits line drives (32% line drive rate), giving him solid long term upside. If Castro can cut down on his o-swing rate and add a couple of miles per hour to his average exit velocity (which an improved plate discipline profile may help with), then he should be a valuable fantasy asset. He's a little far from that level right now, but players have made the jump in the past, and Castro should have plenty of opportunities for playing time on a weak Tigers team. Keep an eye on his progress going forward, and if Castro starts to develop his power and improve his plate approach then an investment in him would be worthwhile.

Mengden allowed four runs over 5.1 innings against the Rangers on Friday. Mengden has looked worse than usual this season and took a 4.65 ERA into Friday's start. Mengden is posting career worst numbers just about across the board, spanning from his hard hit rate (42.7%) to his swinging strike rate (5.9%) and his zone rate (86.6%). As a result, Mengden owns career worst strikeout at walk rates (16.3% and 9.5%, respectively), posting numbers that would make him borderline unusable even if he owned a particularly favorable batted ball profile. Mengden has increased his cutter and sinker usage this season, trends that have improved his batted ball profile somewhat (his xwOBA on contact has gone from .393 last year to .366 this season) but still leave a lot to be desired while capping his already underwhelming strikeout ability. Fantasy owners shouldn't expect much out of Mengden, and can feel comfortable leaving him on waivers this year unless he makes some dramatic changes.

Starling went 2-4 and scored a run against the Indians on Friday. Starling has played well after earning a major league call-up earlier this month, but the former top prospect will likely see his numbers decline over the rest of the season. Although Starling's plate discipline and contact profiles are strong (20.5% o-swing rate, 73.2% z-swing rate, 90.4% z-contact rate), his lack of power and ground ball heavy batted ball profile suggest that his .793 OPS will decline. Despite a poor 81.2 MPH average exit velocity, 3.4% barrel rate, and 1.33 GB/FB ratio, Starling owns a .393 BABIP that is likely to decline below the major league average (typically around .300) over the rest of the year. Starling's xwOBA reflects his luck, as it currently sits at .289 -- nearly 30 points below the MLB average and 54 points above his current wOBA. Starling's strong plate approach and athleticism give him some fantasy upside long term, but unless he can develop some power and decrease his ground ball rate, then he doesn't offer much for fantasy owners to get excited about.