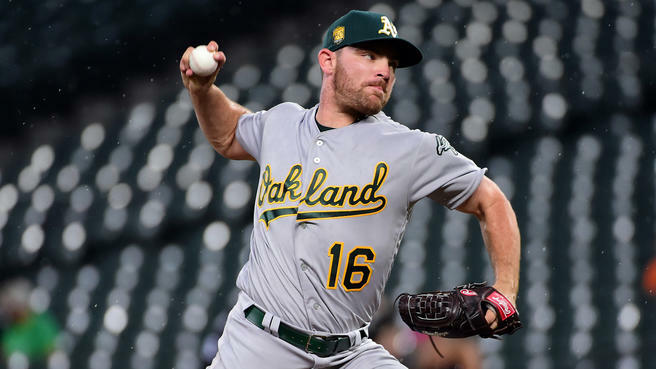 Liam Hendricks (RP-OAK) - Hendricks recorded his 16th save Tuesday with a scoreless ninth inning against the Royals. This year's Blake Treinen now has a 1.43 ERA, 0.97 WHIP, and 95:19 K:BB in 69 elite innings. Hendricks now has a streak of 10.2 scoreless innings with an eye-popping 22:0 K:BB. Yeah no typo there. A failed starter (what reliever isn't), Hendricks has a 10.6 K/9 since 2014, and he's seen his velocity spike this year with a 96.2 mph average fastball versus last year's 94.3. Hendricks has allowed just two home runs in 69 innings in a year in which it's rare to see a pitcher with a HR/9 below 1.0, so that metric could go south, but this is a top-5 closer right now.

Brock Holt (UT-BOS) - Holt isn't a future All-Star (well, barring a first-half hot streak at some point), but he's still among the league's most underrated players. Tuesday, Holt was 3-for-4 with a double and two RBI to lift him to a surprising .329/.402/.468 in 173 at-bats. Why so few at-bats with that stat line? Well, Holt missed significant games earlier in the year with a shoulder injury, and several games because the Red Sox had perceived better options. Holt is about to be pushed aside further by the impending return of Michael Chavis (shoulder), but with how he's performed, Holt should have some value (particularly for his BA) in deeper formats.

Aaron Brooks (SP-BAL) - Well I didn't see this coming. The Nationals had been hitting the ball quite well in recent games, so of course Brooks held them to two hits over six shutout innings in a 2-0 win. He also fanned six, and one of the hits was a bunt single. Brooks entered the game with a 6.21 ERA and 1.44 WHIP, but this was his second solid start in a row, so perhaps he's finding some sort of groove. Prior to Tuesday, Brooks had a 6.7 K/9 for his career to go with a 6.97 ERA and nearly two homers per nine innings, so he'll continue to be a risk going forward, but perhaps as a SP2 in Draft Kings for something in the low $5k range would net good results next time out.

Mike Montgomery (SP-KC) - Only on a rebuilding / non-competitive team like the Royals would Montgomery be getting an opportunity to start. He's actually been pretty decent though lately, as evidenced by Tuesday's start - one earned on 6.1 innings with six strikeouts to lower his ERA to 4.66. Sure that's not great by any means, but Montgomery has recorded quality starts in three of his last four outings, and with a thin Royals' rotation, he should get 5-6 more starts by season's end. Montgomery has shown flashes of mid-rotation upside at times in his career, but inconsistency and poor command has derailed his drive to establish himself. He's a decent streaming and Draft Kings option, but please don't use him on the road - 7.44 ERA this year.