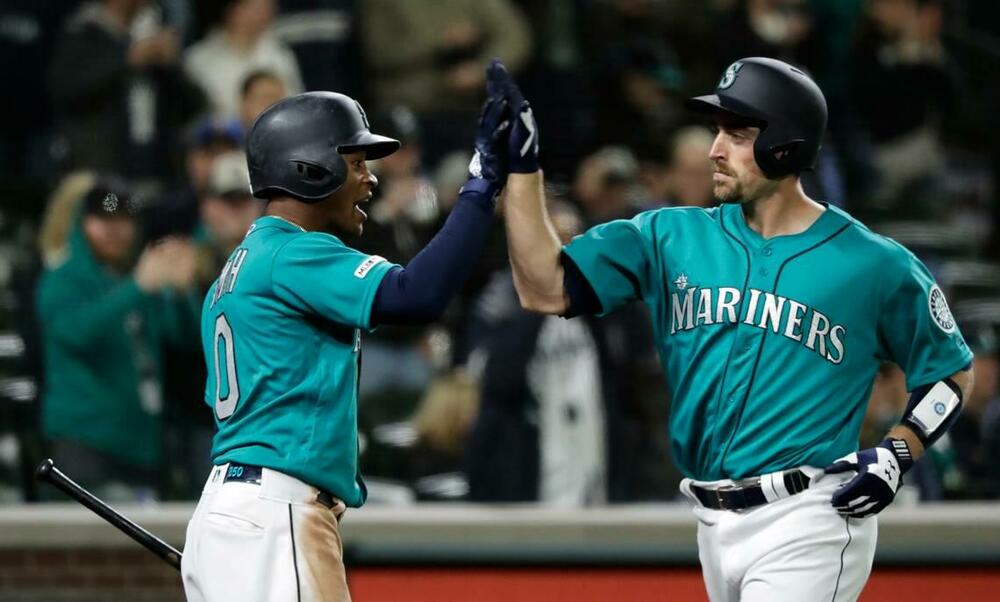 Tom Murphy (C-SEA) crushed Rays pitching on Monday night, going 3-3 with a pair of jacks, 4 RBI, and a walk. The 28 year-old backstop now owns a .296 average on the year to go along with 15 homers and 33 RBI through just 189 plate appearances. As his 34% strikeout rate suggests, he struggles to make contact (70% contact rate) and his 4% walk rate indicates that he isn't exactly the most patient hitter. However, he makes plenty of loud contact when he does get the bat on the ball (43% hard-hit rate) and he appears to focus on the big fly, as his flyball rate sits at 49% and his liner clip is 23% - leaving just 28% for grounders. Unfortunately, with Omar Narvaez enjoying a fine season in Seattle Murphy is struggling to crack the lineup regularly, as this was just his 7th game played in August even though he's now homered in 3 straight games played, slugging 5 dingers in his last 13 plate appearances.

Yoan Moncada (3B-CWS) is expected to return from the IL for Thursday's series opener in Texas. The 24 year-old injured a hamstring back on July 30th and has been on the shelf ever since. This is unfortunate, as Moncada has made some significant strides in his second full season in the majors. After logging a subpar 97 wRC+ last season, he's recorded a nice 134 wRC+ this year, slugging a career-best 20 homers in just 409 plate appearances while batting .301, well above last season's deplorable .235 clip. To some extent the gains are real, as he's slashed his strikeout rate over 5% from last year's 33% clip while attacking the ball earlier in the count en route to posting a 40% hard hit rate (37% in 2018). Although his contact rate has stayed steady at 70%, he's swung at more pitches inside the zone (up 4% to 68%) while making more contact (up 2% to 82%) on those pitches. As part of his more aggressive approach (swing rate up 7% to 48%), however, he's also swinging at more pitches outside the zone (up 10% to 33%) while making contact at only a 51% rate on those pitches (up 1% from last season). While there is reason to be optimistic that his adjusted approach has produced some real gains, fantasy owners should temper their expectations a little going into 2020, as his .382 BABIP is a tad high, as is his 21% HR/FB.

Hunter Dozier (3B-KC) went 1-3 with a pair of RBI against the Orioles on Monday. The 27 year-old post-hype breakout now owns a .290 average to go along with 22 homers and 69 RBI in 437 plate appearances on the year. An IL stint in June took a bite out of his overall numbers, but they are still solid and he's been fairly consistent beyond that month. In fact, Dozier has actually enjoyed a stronger second half, as he was batting .303 with 9 homers and 22 RBI through 132 plate appearances since the All-Star break entering Monday's contest after hitting .282 with 13 longballs and 45 RBI before the break. Although his walks are down about 2.5% (to 9%) and his strikeouts are up 2% to 24.5%, he's hitting the ball harder (his hard-hit rate is up 3.5% to nearly 52%) and has maintained his line-drive (23%) and flyball (45%) rates. Opposing pitchers have had the opportunity to figure him out and he's still going strong - the breakout looks legit.

Chris Sale (SP-BOS) and the Red Sox received relatively good news from Dr. James Andrews, who confirmed that the southpaw is dealing with elbow inflammation. The bad news for his fantasy owners is that Andrews recommended that Sale receive a platelet-rich plasma injection and not throw before he is reevaluated in 6 weeks. He can be dropped in redraft leagues. The 30 year-old hadn't been quite as good in 2019 as seasons past, but 3.40 suggests that his 4.40 ERA is a bit bloated thanks to some bad luck - namely a 67% strand rate and .309 BABIP. Sale's 13.32 K/9 remains elite and on par with last season's 13.50, although his 2.26 BB/9 - which isn't bad by any means - is easily his highest since 2012. And in the age of the juiced baseball, it should come as little surprise that the 36% hard-hit rate that opposing batters logged against Sale is a career-worst for him - he'd only allowed a hard-hit rate above 30% once in his career before this year, and that was only 32% back in 2016. And one last thing that raises an eyebrow - something that goes hand-in-hand with an elbow injury for sure - is the fact that his average fastball velocity is down to 94mph from last year's 96.

Brendan McKay (SP-TB) lasted just 2 innings against the Mariners on Monday, as he surrendered 7 runs (3 earned) on 3 hits and 3 walks while striking out just 1. While his defense didn't help him by committing two throwing errors, McKay made a lot of his own trouble with uncharacteristically poor control and by tossing a couple of meatballs that got knocked out of the park. And so the 23 year-old's rough start to his major league continues, as he now owns a 6.06 ERA through his first 8 starts. His 4.84 FIP, however, suggests that he hasn't been THAT bad - he's been hurt by a .337 BABIP and 65% strand rate. Although the southpaw has posted a solid 10.35 K/9, his trademark control - he recorded a 2.48 BB/9 in Triple-A this year, his highest in his minor-league career - has been absent as he's walked 9 batsmen over his last 2 starts (6 total innings pitched). It's ultimately way too early to give up on McKay, who is one of the game's top 15 prospects - but fantasy owners may have to wait until next year for him to be a reliable contributor.