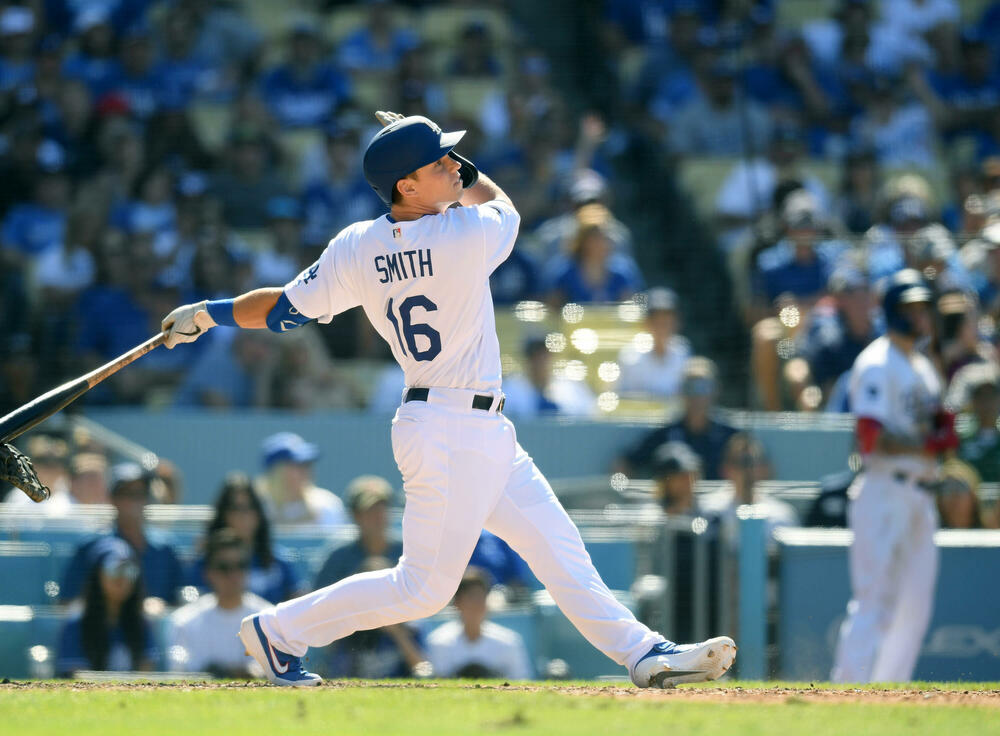 Will Smith (C-LAD) added to his stellar rookie campaign by going 2-4 with a pair of dingers, 3 RBI, and a walk against the Marlins on Tuesday. The 24 year-old backstop now owns an impressive .324 average with 9 homers and 26 RBI through just 79 plate appearances in the majors. While he whiffs a good bit (26%) and doesn't walk a ton (7%), he punishes the ball (53% hard-hit rate) and lofts plenty of flyballs (51%) and ropes lots of liners (25%). There's no way he will maintain a 28% HR/FB, but he did log HR/FB rates above 20% in significant PAs in Double-A in 2018 (307) and Triple-A this season (268). Add him while he's hot and don't worry about whether he can sustain this. He's owned in just under 32% of ESPN leagues while the disappointing Danny Jansen is owned in 31%.

Nicholas Castellanos (OF-CHC) continued his revival with the Cubs, going 2-4 a solo homer against the Phillies on Tuesday. His 2019 season as a whole has been underwhelming as the 27 year-old is now batting .285 with 16 homers and 44 RBI through 492 plate appearances. But he's begun to turn things around since joining the Cubs at the trade deadline, as he was hitting .370 with 4 homers and 6 RBI through 46 August at-bats entering Tuesday's game. His hard-hit rate is up to 51% and his line-drive rate has spiked to 31% in August. He won't be able to sustain a 33% HR/FB, but it's clear that a change of scenery has rejuvenated Castellanos. Or maybe it's because his new park isn't "a joke."

Jose Quintana (SP-CHC) tore through the Phillies lineup on Tuesday evening, allowing just 1 earned run on 5 hits and a walk while recording a season-high 14 punchouts in 6 innings of work. Quintana has never been an elite fantasy option, but he's been a steady contributor since his sophomore campaign with the White Sox in 2013. In several ways, though, his 2019 campaign is lining up to be one of his weakest overall. His 4.20 xFIP is his highest since his rookie season. The 39% hard-hit rate that opposing batters have posted against him is easily a career-worst, as is the 24% line-drive rate they've recorded on batted balls. I'm not saying that the sky is falling, but some key peripherals are trending in the wrong direction. It should be little surprising, then, that his ERA after Tuesday's start (4.11) is barely below his career high (4.15 in 2017).

Max Fried (SP-ATL) stifled the red-hot Mets lineup on Tuesday, giving up just 1 run on 6 hits and 3 walks while recording 4 punchouts. Despite some inconsistency, the 25 year-old southpaw has taken significant strides in 2019. His 3.99 ERA after Tuesday's outing might not stand out, but a 3.53 xFIP points to a high .339 BABIP and 18.1% HR/FB inflating that ERA. However, he does own a nice combination of a solid 9 K/9 and a 53% groundball rate. Perhaps above all else, one key development stands out in his profile: a 2.7 BB/9 that bests anything he ever posted in the minors or the majors before this season. That is the kind of improvement that can lead to a breakout season.

Zack Wheeler (SP-NYM) got knocked around by the Braves on Tuesday, giving up 5 runs on 12 hits and 2 walks while fanning just 2 in 5 innings of work. The 29 year-old has put together a fine season overall, though, one that compares well with last year's breakout performance. Although his 4.36 ERA after Tuesday's contest is considerably higher than 2018's 3.31, his 3.54 FIP indicates that he's run up against some bad luck - a low 69% strand rate and slightly inflated 13% HR/FB bear that out. In two key areas, though, Wheeler's improved noticeably - his K/9 is up to 9.6 from last year's 8.8 while his BB/9 is down from 2.7 to 2.3. The peripherals indicate that what he started to do last season is legit, so he would be a good buy if his inflated ERA makes some fantasy owners undervalue him.