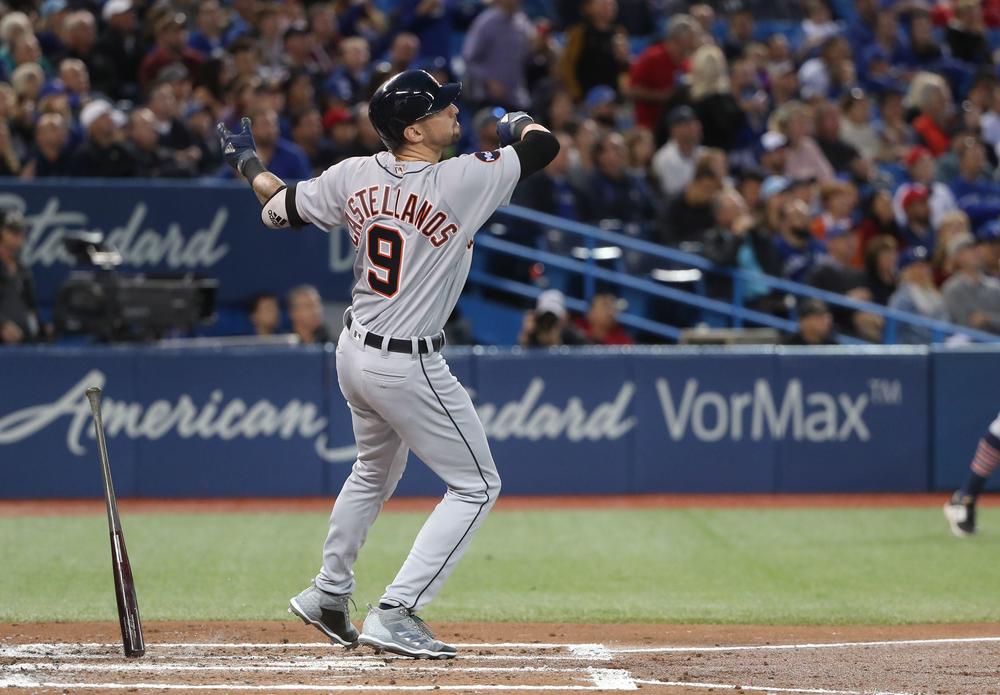 Castellanos went 1-4 with a home run against the Mets on Wednesday. Castellanos has had a solid season so far but has been particularly hot since joining the Cubs at the trade deadline and owns a 1.114 OPS with his newest team. Part of Castellanos' success has likely been the pitch mix he's faced (more than 60% of the pitches he's seen in August have been fastballs, compared to around 50% in May, June, and July -- the league average usage is 45%), but he's also done a better job laying off of offspeed pitches (which he struggles to hit) and has posted a season best hard hit rate (by far). As a result, Castellanos has posted some impressive (but unsustainable) numbers including a 7.9% home run rate and a .418 BABIP. Castellanos won't stay this hot over the rest of the year, but if he continues to be more patient at the plate and if pitchers continue to attack him with fastballs (which likely won't happen), then he should continue to post better than his full season numbers going forward. Sill, Castellanos should reasonably be expected to be only slightly better than he's been all year as his pitch by pitch performance hasn't changed much (with the exception of offspeed pitches, which could fuel some legitimate improvement if sustained) and the increased frequency of fastballs has driven a large part of his recent hot streak.

Flaherty allowed three runs (two earned) over six innings with seven strikeouts against the Brewers on Wednesday. After enduring a rough start to the season that saw him post a 4.64 ERA in the first half, Flaherty has bounced back in a big way and took a sparkling 0.73 ERA in his first eight second half starts. Flaherty's primary adjustment was related to his pitch mix; over the past two months, Flaherty's slider usage has jumped to 31.9% from 26.7% while his fastball usage has dropped to 46.8% from 51.3%, and his strikeout rate and batted ball quality have improved as a result. In addition, each of Flaherty's pitches have seen their performance improve (particularly in terms of hard hit rate, but many of his pitches have improved in whiffs/swing as well), indicating that he's figured out whatever may have been troubling him earlier this year. Flaherty has been a little lucky (in five August starts he's posted a .191 BABIP), but fantasy owners should expect a strong finish to the season from the 23-year-old.

Berti went 0-4 with a pair of strikeouts against the Reds on Wednesday. Berti has played well for the Marlins this year, and the 29-year-old quietly offers solid power to all fields, a strong plate approach, and double digit steal potential. With a 44.1% Stacast hard hit rate and an 88.1 MPH average exit velocity, Berti's power numbers are better than average (and combined with his scattered batted ball distribution help keep his BABIP high), and his 23.7% o-swing rate and 9% swinging strike rate keep his strikeout rate in check. Berti's most obvious significant flaw is his ground ball rate; with a 1.34 GB/FB ratio, Berti's extra base hit rate sits at a pedestrian 8.3% despite his solid power, and his heavy ground ball profile limits his overall upside. Still, Berti should be counted on to deliver solid but unexceptional numbers with decent long term potential if he can start hitting more fly balls and line drives.

Keller allowed two runs over five innings with no walks and five strikeouts against the Phillies on Wednesday. Keller entered the season as a consensus top-30 prospect after posting a 3.12 ERA over six minor league seasons, but the rookie has struggled in his MLB debut season and took a 7.24 ERA into Wednesday's game. Keller has only thrown 27.1 major league innings (before Wednesday) though, and his numbers suggest significant improvement over the rest of the season. Although Keller does get hit fairly hard (88.8 MPH average exit velocity, 36% line drive rate, 0.54 GB/FB ratio), leading to a poor .393 xwOBA on contact, his above average 25.6% strikeout rate pushes his xwOBA down to an only slightly worse than average .320 xwOBA. Considering Keller's .394 wOBA, his batted ball results should improve over the rest of the year. Peripherals like Keller too (relatively) -- his 4.02 FIP and 4.33 SIERA are substantially better than his ERA -- but there are reasons to be concerned about his performance going forward. With a ridiculous 54.76% whiffs/swing on his slider, Keller has managed to post a 12.3% swinging strike rate and 76.2% contact rate despite a 25.6% o-swing rate, and the sustainability of those numbers are questionable. Additionally, Keller's heavy fly-ball profile and below average contact quality have translated into a better than average home run rate that should rise over the rest of the year. Overall, expect Keller's performance to improve, and his wipeout slider should have him on the radar of fantasy owners, but don't expect him to be a usable starter this season.

Aquino set the record for the most home runs in a player's first 100 PA with his 13th home run of the year and a 2-4 game against the Marlins on Wednesday. Aquino has lit up major league pitching since his call-up at the beginning of August, and the 25-year-old took a 1.128 OPS into Wednesday's game. Aquino has an aggressive plate approach with a 39.6% o-swing rate and an 84.5% z-swing rate, but his 69.5% contact rate and 17% swinging strike rate indicate that his surprisingly decent 23.5% strikeout rate should rise. Although his overall peripherals don't favor his relatively low strikeout rate, Aquino does appear to use a different, contact-focused swing when he gets to two strike counts based on his .096/.175/.192 slash line and .143 BABIP when faced with two strikes. If his approach does change significantly in two strike counts, then Aquino's somewhat puzzeling batted ball profile makes more sense as well. Despite posting a below average 86.6 MPH average exit velocity, Aquino owns an 18.5% barrel rate, a 34.3% HR/FB ratio (likely to fall), and a strong .468 xwOBA on contact. Aquino has been pretty lucky (his wOBA is 80 points higher than his xwOBA for the fifth highest difference among players with at least 50 PA) and fantasy owners should consider selling high, but if Aquino does switch to a contact focused approach with two strikes, then his overall numbers appear to be very promising (if not, a wait and see approach should be used).