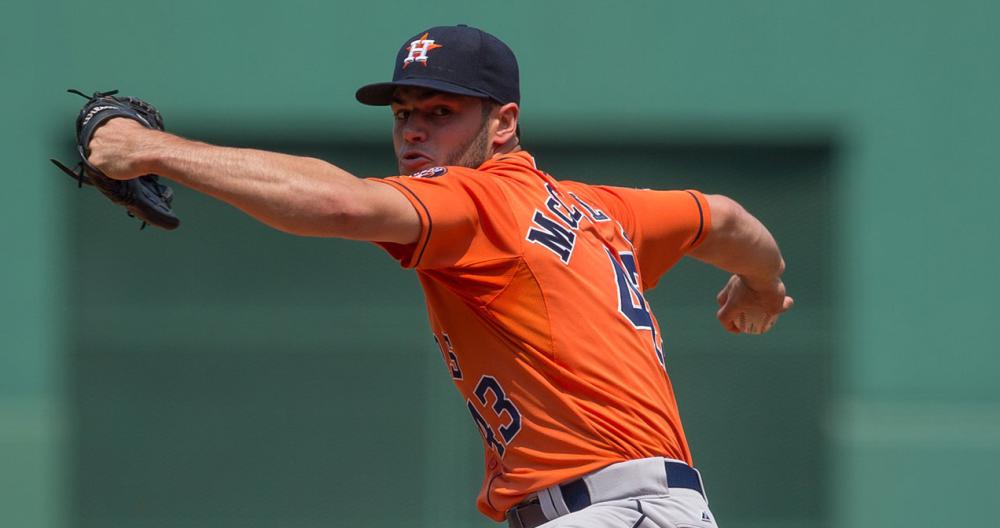 Encarnacion's poor start to the season continued on Sunday, with the 37-year-old going 0-for-4 with a pair of strikeouts while bringing full-season batting average down to .149 and his OPS to .460. Nothing is encouraging about Encarnacion's slow start either, with his hard-hit rate (23.1%), xwOBAcon (.294), and swinging-strike (15.2%) rate all ranking near the bottom of the league. It's not clear if there's anything physically wrong with Encarnacion, and he's only had 50 PA so far this season, but he's in a deep slump with no end in sight right now. 50 plate appearances is too small a sample to expect Encarnacion to play poorly over the entire season and he's coming off of a season with a .875 OPS, so fantasy players should generally remain patient with the first baseman if they are in a position to do so. That being said, Encarnacion is beginning to look droppable and may be worth cutting depending on the state of your league's waiver wire.

Dozier went 1-for-4 with his first home run of the season against the Twins on Sunday. Sunday was only Dozier's sixth game this season after he missed time with a positive coronavirus test, and the 28-year-old will look to build off of last season's breakout campaign this year. Dozier put together a strong .279/.348/.522 slash line with 26 home runs last season, and his breakout came largely as a result of an improved plate approach and better contact skills. Dozier's o-swing rate dropped to 30.1% last year after sitting above 35% in his rookie season, and his 90.4% z-contact rate was up by about two points. Dozier's strikeout rate dropped nearly three points to 25.3% as a result. Combined with his already impressive contact quality (.417 xwOBAcon in 2018), Dozier's improved strikeout rate allowed him to post an OPS above .850 last season, and his OPS will likely eclipse .800 again this year.

McCullers pitched well against the Mariners on Sunday, allowing two runs over 5.2 innings while picking up seven strikeouts. Under the hood, McCullers allowed only two hard-hit balls and generated swinging-strikes at an impressive 16.5% rate, including an elite 30.5% swinging-strike rate from his curveball. The Mariners aren't exactly an offensive juggernaut with a team .658 OPS for the season, but McCullers has now allowed two runs with 12 strikeouts over his last two starts. Fantasy players should expect McCullers to post an ERA below 3.80 with a strikeout rate above 25% for the rest of the season, though his next scheduled start comes against a considerably stronger offense in the Padres, especially considering that San Diego owns a 10.7% swinging-strike rate against curveballs this season.

Santander stayed hot with a pair of home runs on Sunday, and the 25-year-old now owns a .935 OPS for the season. Santander has adopted even more of a swing-at-everything plate approach than usual this season with a 41.7% o-swing rate and an 80.6% z-swing rate, and his ability to make consistently solid contact on pitches outside of the strike zone has resulted in his strong start. Still, fantasy players shouldn't completely buy Santander's hot start this season. Much of Santander's success this season is built on a 12.8% strikeout rate that is likely to rise over 15% over the rest of the season even with his aggressive approach and strong contact skills. Santander is likely to see his OPS drop towards .800 for the season as a result, but that level of production still makes him a rosterable fantasy outfielder in many leagues.

Olson went 3-for-5 with a trio of singles against the Giants on Sunday. Olson owns a very 2020 .185 batting average and .808 OPS this season, with his BABIP sitting at a ridiculous .085. What matters for fantasy purposes is that Olson has been tearing the cover off of the ball with a 54.5% hard-hit rate and a 12.7% barrel rate, and he's done it with elite plate discipline and strong contact skills. Olson has chased only 17.8% of pitches outside of the strike zone so far this season, but he's been aggressive with pitches inside of the zone with a 73% z-swing rate. Add in Olson's 9.9% swinging-strike rate, and his sparkling 18.3% walk rate and better than average 22.6% strikeout rate look mostly reasonable. If Olson can keep this up as his BABIP naturally rises then he should post an OPS near .900 again this season.