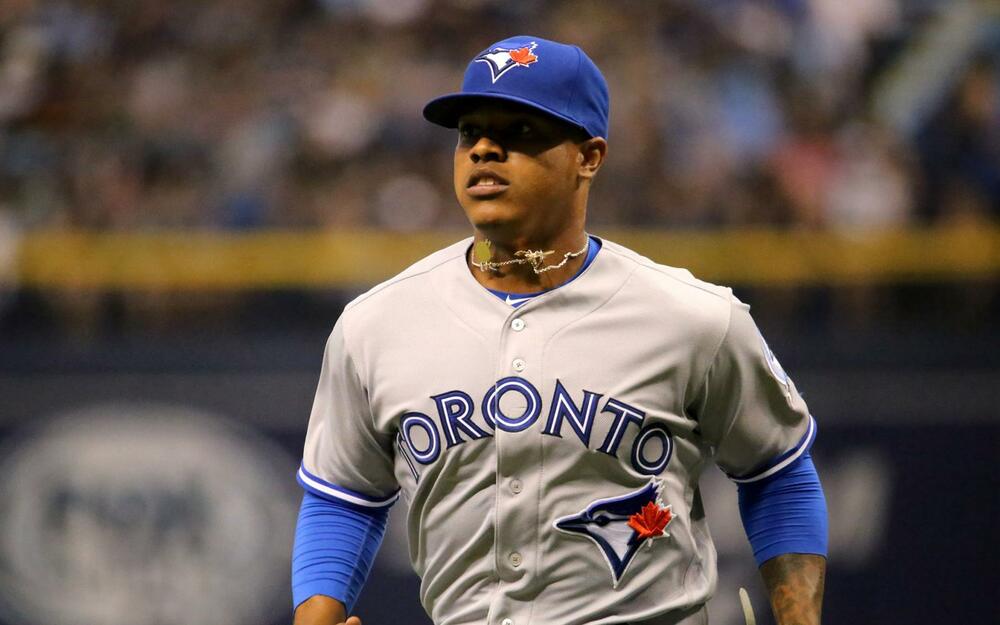 Guerrero clubbed a 116 mph home run against the Rays on Friday. Guerrero fell short of lofty expectations last season with a .772 OPS over 123 games, and he's struggled so far this season with a .710 OPS through his first 23 games. Guerrero has put together a more impressive performance under the hood though and has been heating up lately, making him an excellent buy-low opportunity in fantasy leagues. Notably, Guerrero's plate discipline went from good to great over the offseason, with his o-swing rate falling about five points to 26.8% and his z-swing rate rising more than six points to 78.2%. That improved plate discipline has helped Guerrero cut his strikeout rate down to 16.5% while boosting his walk rate to 9.3%. Those aren't extreme effects (and his swinging-strike rate only decreased by 0.4 points), but Guerrero's contact quality has improved as well. To that end, Guerrero's hard-hit rate has jumped more than nine points to a nearly elite 47.9%, and his xwOBAcon has increased by nine points to .372. Encouragingly, Guerrero's xwOBAcon should improve even more over the rest of the season as he continues to cut down on his high 56.3% ground-ball rate (48% over his last 10 games). Guerrero still probably won't do much more than scratch the surface of his long-term potential this season, but he should post an OPS well above .800 for the rest of the season and has the upside to post a mark above .850.

Odorizzi allowed five runs over just three innings against the Royals on Friday. Despite his slow start this year, Odorizzi is only a season removed from earning his first career All-Star berth with a 3.51 ERA and 3.36 FIP. The good news so far this season is that Odorizzi's 12% swinging-strike rate is closer to last season's 12.7% mark than to his 10.4% career-average and that most of the damage done against Odorizzi so far this season is contact-related. Odorizzi has struggled to manage the contact he's allowed so far this season with a .602 xwOBAcon that ranks near the bottom of the league, and his splitter has been a major culprit given its .603 xwOBA for the season, and the pitch failed to generate a whiff on Friday. Shaky command appears to be driving Odorizzi's poor splitter performance, as he's been leaving it hanging over the plate at an uncharacteristically high rate. Odorizzi's splitter is also moving differently this season with less horizontal break and slightly more vertical break, and the pitch's spin rate is way down. All of that may make the pitch more easily differentiable from Odorizzi's fastball, potentially playing a role in its diminished effectiveness. Fantasy players should monitor Odorizzi's splitter going forward, and he has a chance to enjoy a bounce-back over the rest of the season if he can regain the pitch as a strength or tweak his pitch mix to limit its damage.

Devers went 1-for-4 with a home run and a walk against the Orioles on Friday. Devers has struggled to follow-up last season's breakout campaign with a .691 OPS, Friday's performance was a step in the right direction. Despite a low 32.9% hard-hit rate, contact quality hasn't been much of an issue for Devers so far this season with his .419 xwOBAcon sitting only 10 points below last season's .419 mark. Devers has instead struggled to make contact, with his 14.1% swinging-strike rate representing a career-worst and resulting in a 25.5% strikeout rate that tops last season's mark by more than eight points. Interestingly, Devers appears to be having trouble making contact against fastballs this year, with his 18.3% swinging-strike rate against the pitch shattering his 13.6% career-average and doubling the league average. The vast majority of Devers's .043 decrease in xwOBA can be attributed to his career-worst .293 xwOBA against fastballs. It's not clear what that means for Devers's chances of bouncing-back this season, but Devers's performance against fastballs is worth monitoring. Importantly, Devers's struggles against fastballs make him a desirable DFS option against pitchers with weak fastballs; with his price slightly depressed due to his poor performance this season, Devers should be a valuable play with the right matchups.

Soler hit his sixth home run of the season with a 408 ft shot against the Twins on Friday. Soler hasn't had much trouble hitting home runs with Friday's shot being his sixth in 26 games, but his 5% home run rate is still down from his 7.1% rate last season. Despite a more than five-point drop his HR:FB (15% this season), Soler hasn't had any problem hitting for power with a 49% hard-hit rate and .546 xwOBAcon so far this season. Soler's 35.9% strikeout rate is a near-10 point jump from last season, but the jump can completely be attributed to an increase in called strikes, as Soler's 13.2% swinging-strike rate is in-line with last season's mark, while z-swing rate is down nearly 12 points. A hitter's swinging-strike rate is generally stickier than his called-strike rate season over season, so fantasy players should expect Soler's strikeout rate to drop towards 30% over the rest of the season, and his z-swing rate is worth monitoring. If Soler starts to show an increasing trend in his z-swing rate, then he's likely worth buying in most leagues.

Anderson picked up another hit on Friday, bringing his full-season batting average to .366 and his OPS to 1.132. Anderson has managed to follow up his impressive 2019 season with an even better start to his 2020 campaign, and he's done it with significantly improved underlying metrics. Anderson's contact rate is down a little bit at 74.3%, but his hard-hit (48.1%) and barrel (13.5%) rates are way up this year, as are his xwOBA (.417) and xwOBAcon (.509). As questionable as Anderson's .399 BABIP was last season, his deserved BABIP is likely higher this year, though still well below his current .413 mark based on his 0.059 wOBA - xwOBA. Anderson should cool off somewhat over the rest of the season, but he appears set to post a batting average above .300 with an OPS above .850.