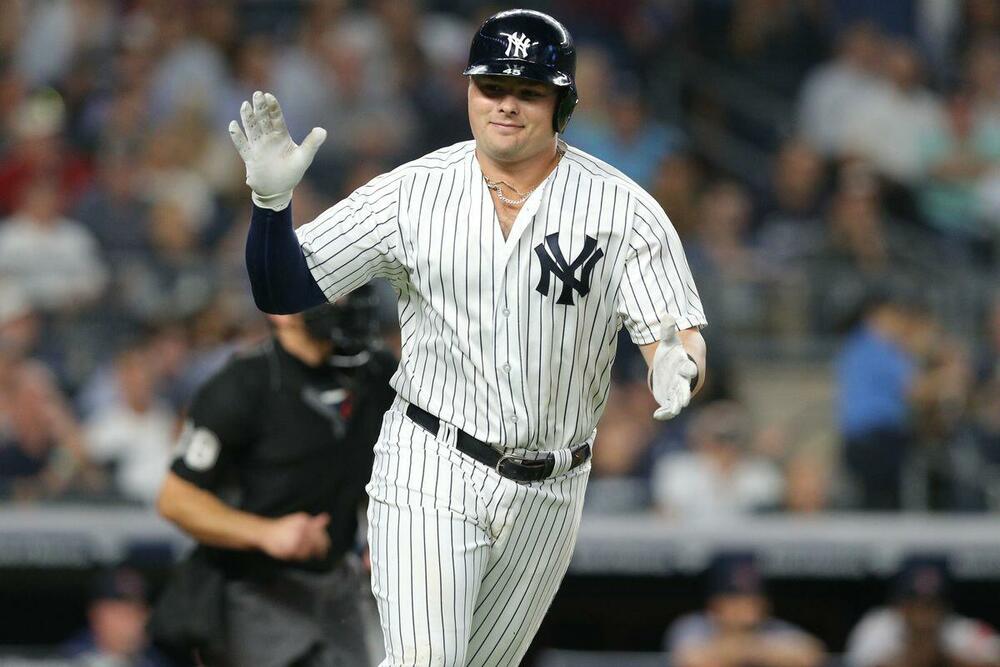 Voit went 3-7 with 2 runs and a double Friday while hitting leadoff in both contests. Voit's .725 SLG% entering play Friday leads all of baseball by a wide margin and Voit has vaulted his way into the AL MVP conversation by launching 6 home runs in a 5-day stretch ending Wednesday. With all the injuries on the Yankees squad Voit has been their best hitter and his placement hitting leadoff is interesting considering his 7.9% BB this year is below his 11.5% career mark. He has shown pop the past 2 seasons hittin 36 season home runs over 163 games but has seen his ratio skyrocket thanks to a career high 47% flyball rate and 50.9% hard hit rate.

Means lasted 4 innings Friday vs the Blue Jays allowing 2 runs, both on home runs while striking out 3. Other than back-to-back home runs Means was mostly able to minimize the dame. The casual glance will show Means had passable surface numbers a 12-11 record with a 3.88 ERA as season ago. His 5.34 xfip tells a different story as his 9.9% FB/HR rate ranked as the 3rd lowest in all of Baseball despite his 50% flyball rate being the second highest for pitchers pitching 150+ innings. His 2020 8.59 ERA is a bit ballooned as he has only lasted 14 innings in 5 starts, but his 2020 numbers entering play Friday (41% flyball rates / 26% FB/HR rate) are more indicative of his tendencies and that was evidenced Friday night. The tough start to 2020 comes despite him adding nearly 3 mph on his fastball (92 to 95 mph) from a season ago.

Guerrero Jr. went 2 for 4 with his 5th home run of the season. The home run extended his hit streak to 10 games, a stretch that has seen his OPS grow from .634 to its current .821 mark. Vlad Jr. has also added 8 RBIs and a strong 5:3 BB:K ratio during the streak. Despite his Iso sitting about 30 points higher (.191) than his Rookie Campaign he is still hitting an incredible number of groundballs (58%) for someone with such power potential as he has. He still hits the ball very hard (50% hard hit rate) but until he increases his Launch Angle form a low 3.4-degree average he won't be able to tap into his true power potential.

Lopez allowed 2 ER on 6 hits over 4 innings, while striking out 4. His third start of the season was a mixed bag as he needed 70 pitches to get through 4 innings and despite a bit of wildness was still able to rack up 4 Ks. He has not yet delivered upon the promise of being a once Top-100 Prospect as he struggled to a 5.38 ERA/1.46 WHIP over 33 starts last season. The strikeout rate was passable (8.3 K/9) but he was wildly inconsistent last year including tossing a complete game 1-hit shutout sandwiched between 2 starts where he allowed 6 ER apiece. Lopez surrendered 5+ runs in 12 of his 33 starts last year while allowing 1 or less in 10 starts. Through 3 starts this year his avg fastball velocity is down from 95.5mph to 93.9mph so it will be interesting to see where this sits as he continues to pitch deeper into games.

Florial made his MLB debut in game 1 of the Yankees DH hitting 7th and playing Centerfield. He went 1-3 with a pair of strikeouts. Once again injuries have decimated the Yankees so Florial got the call despite never playing above A+. He has immense raw speed and power but the numbers just haven't been there yet as he slashed an underwhelming .237/.297/.383 with 8 home runs and 9 steal at High A last season. An 8% walk and 32% K rate won't cut it in the big leagues with his ability to make contact most likely dictating his playing time in the short term this year. While the steals are nice he has a long way to go as a baserunner as he has a poor stolen base attempt rate (20-35) over the past 2 seasons.