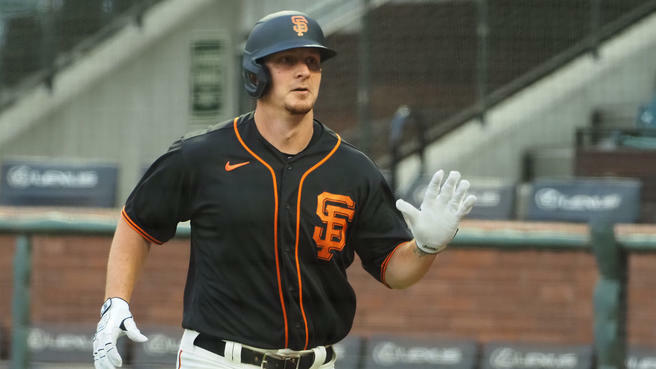 Is Wilmer Flores finally realizing his potential 7 years into his career? August 22, 2020

Is Wilmer Flores finally realizing his potential 7 years into his career? August 22, 2020

Wilmer Flores (1B/2B - SF) - Flores is scorching right now, going 7-11 with 3 HR and 10 RBI over the past three games. The thing with Flores is that everyone has this partial misconception of him as a lefty-masher.....he can simply hit, he just hasn't been given the opportunity to play every day much at all over the past 5 years. Flores routinely makes contact in the 84-88 percent range, and with that level of hand-eye coordination, the significant increase in hard contact since 2018 was bound to boost the AVG. His power is probably only in the average range, but he is a much better hitter overall than he has been given credit for being, and I do think he's worth an add in most formats. He's eligible at 1B and 2B right now with 3 games in at 3B as well....the only thing he will never give you is speed.

Jake Cronenworth (1B/2B/SS - SD) - Cronenworth has hit in 6 straight after a double and pair of walks on Friday, and he's now hitting 328/400/597 for the year. I'm surprised, but I actually think a lot of this performance is legitimate after looking a little deeper. His contact rates throughout his minor league career were stellar, his sprint speed is 27th in MLB and he's been a solid base stealer in the minors, and his exit velo is just outside the top 50 so the 12 XBH in 22 games aren't all that surprising really. Add in the fact that he has played 5 games at 1B, 2B, and SS after Friday's game, and this is a guy that I think is worth a claim in all formats. 26-year old rookies don't pop up out of nowhere very often, but this kid does have the skill set to continue to be successful.

Jon Lester (SP - CUB) - Even during Lester's decent 3-start stretch to start the year, there were major signs of decline. The swinging strike rate was one of the lowest I've ever seen from a starter, the velocity decline was accelerating, and the FB and hard contact rates were up once again. These past two starts of 9+ IP, 13 ER, and 6 HR are excessive to prove the point, but Lester is absolutely not right and at age 36 he might be at the end of the road. I see no reason to hold on to him in most formats...he's outside my top-90 SP at this point and I don't see any reason for optimism.

Sixto Sanchez (SP - MIA) - Both Sixto and Jesus Sanchez are being called up from the "alternate site" by Miami, but while Jesus seems like he isn't quite ready to me, Sixto could pay immediate dividends for enterprising owners. His stuff has never quite matched the minor league K rates, but with three strong pitches the potential is there, and the control and ability to generate ground balls are both very good. Throw in a favorable home park, and I would claim Sanchez in all formats ASAP if he's available, and I would treat him as a "strong streamer" (only benching him against top-10 offenses on the road).

Joey Bart (C - SF) - The Joey Bart era is here, and the 23 year old backstop has gone 2-7 with a pair of doubles and a walk in his first to starts for the Giants. I watched a few of his ABs Friday, and unlike Cristian Pache, Bart doesn't look overmatched at all for the level. I think he's immediately a top-10 player at the position, and as such is a must-add in all formats if he is somehow still available. Think average contact, plus power type of production.