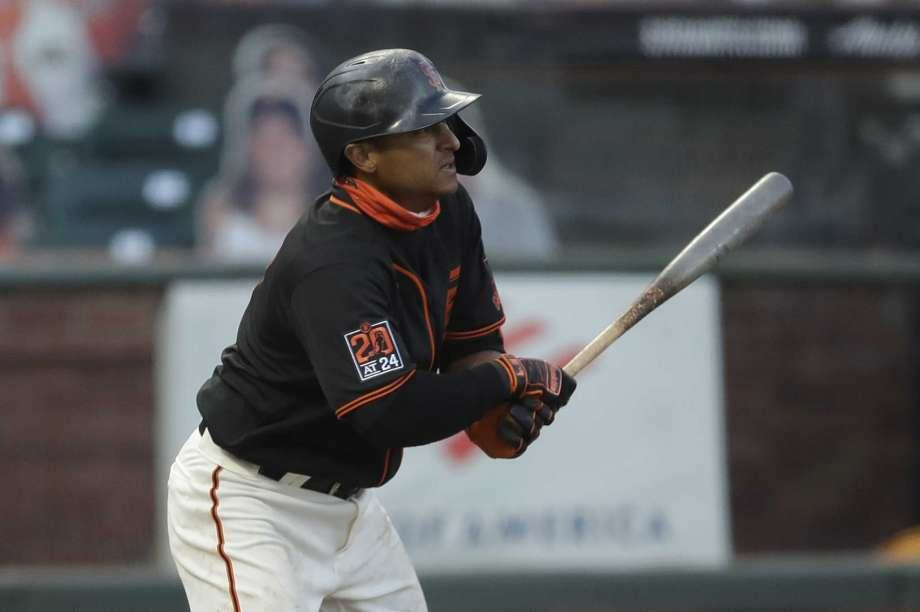 Solano continued his white-hot season start by going 2-2 and drawing a pair of walks while scoring a run. Solano put up underwhelming numbers across parts of 4 season with the Marlins and 1 with the Yankees - but he hit .330 with the Giants last year over 81 games after playing 2017-2018 exclusively in the minor leagues. It is important to note that this was buoyed by a bloated .409 babip and he has a similarly high number this year (.462). Since Solano last logged meaningful at bats in 2016 there had been quite the launch angle and hard hit revolution and this change in approach seems to have reinvigorated his career. He had a measly 1.5 degree launch angle and 21% hard hit rate in 2016 - but he was able to vastly improve on those numbers last year - posting a 14.5 degree launch angle and a 38% hard hit rate - numbers he is replicating this year. Expect the babip to drop from .462 - but because he did this last year, I think in a shortened season there's some value here.

Newman went 2 for 4 with his 1st home run of the season Sunday. Like most of the Pirates hitters, Newman has been marred in a deep slump to open the season as he still has just a .179/.233/.286 line even after Sundays multi-hit effort. Newman has an elevated K rate of 19% this year as he has been wildly unsuccessful when trying to hit pitches outside the zone. His 46.7 % contact rate on pitches outside of the zone is down almost 30% from last year. By comparison he has made contact with 96.3% of pitches in the zone - a Top-10 NL figure. Unfortunately his babip is sitting at a rough .158 and a 31% soft contact rate could be partially to blame. He has a few adjustments to make early on in 2020, and perhaps Sundays game is the start of good things to come.

Bellinger hit his first home run of the season Sunday. It seems like a lot of the big name players, especially in the National League have gotten off to rough starts and Bellinger is no exception. He sat out Saturdays game to clear his head, so hopefully this is the start of good things to come to help pull up his .150/.209/.250 line. For Bellinger it was only a matter of time as he is Striking out at a career low 15.4% clip but his subpar .167 babip may be do to Bellinger overcompensating - as he is swinging at 53% of the pitches he sees, almost 10% higher then his career average. This has led to his walk rate nearly being cut in half to 7% and a very un-Bellinger Like 26% hard-hit rate. Bellinger is such a good player he can even put the bad pitches in play but they are mostly resulting in weak hit balls which aren't helping his cause. Look for his season stats to rise as he becomes more patient at the plate.

Lester had his second strong start to open the season holding the Pirates to 1 ER on 4 hits over 6 innings, while striking out 4. Lester looked great in this one, throwing 15 of 23 first pitches while inducing 8 groundballs. Lester tossed 5 no-hit innings in his first start and this was a nice follow-up after a down 2019 where he pitched to the tune of a 4.46 ERA and have up a career-high tying 26 home runs in just 170 innings. Lester is about as reliable they come starting pitches wise, and since he doesn't put up Elite Ace numbers, he definitely flies under the radar a bit but he has made 31+ starts every season since 2008 while posting a solid 3.56 career ERA. Lester thus far has limited hard contact (25%) and there is no reason to think he can't continue to eating innings for s solid Cubs club.

Peterson allowed 3 ER on 5 hits over 6 IP, while striking out 8. That's 2 solid starts in a row for the Mets youngster who hasn't looked overmatched after having not pitched above AA. Peterson is a heavy groundball pitcher (52%+ GB rate in each stop in the minors) so it was good to see the 7-2 GB:FB ratio he produced Sunday and limited opposing batters to light 22% hard hit in his opening start - which is a key for him going forward to induce weak those groundballs. I wouldn't always expect the strikeouts to be as plentiful as they were Sunday but with the way injuries have ravaged the Mets Rotation, he has a chance to stick.