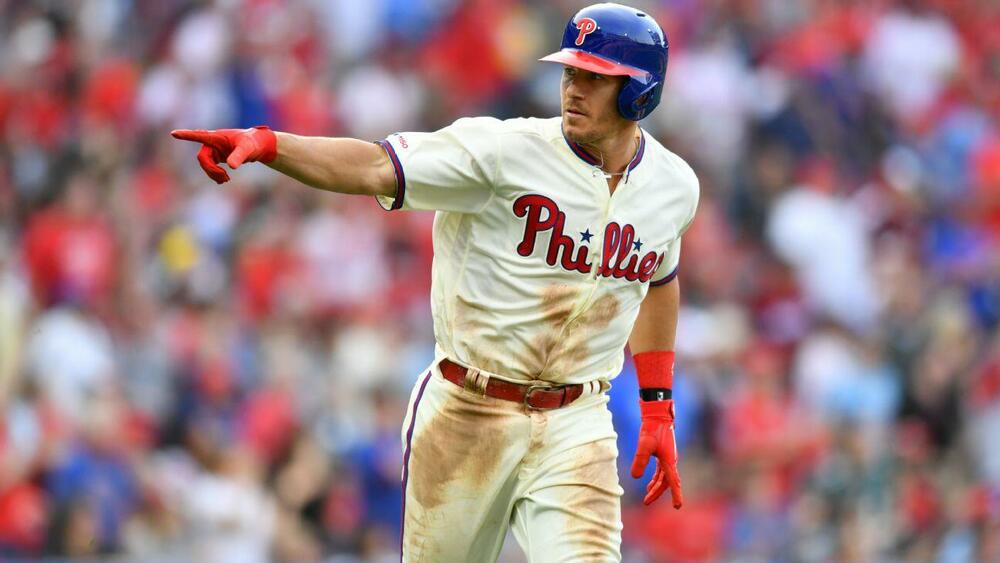 Realmuto went 2-4 with 3rd home run of the season and drove in 3. Realmuto had a monster series vs the Yankees going 6-11 with 5 runs, 2 HR and 5 RBIs and has been the Phillies best hitter early on with a 1.093 OPS and 8 RBIs on the season. Realmuto may only be tapping the surface in 2020 as well. Even though he has an Ops over 1.000 he has hit a whooping 73% of his balls on the ground - and has only pulled 6% of his batted balls - a steep differential from his 22% career rate. He has made his flyballs count with the 3 HR, and look for the best catcher in the league to keep up a strong batting average as he starts hitting more line drives.

Yelich had his best day of the season Thursday going 1 for 2 with 4 walks and an inside-the-park home run among his 3 runs scored. After striking out in 43% of his PAs entering play Thursday Yelich showed much better patience including drawing 2 4-pitch walks to open his day. It seems like possibly just a prolonged slump for Yelich is swinging at a career low amount of pitches (39%) but has a rough 61% contact rate and a career high 15% swinging strike rate. Even when Yelich wasn't playing at an MVP level caliber earlier in his career he wasn't putting up these numbers, so maybe the off day Wednesday was a jumpstart to the hits to start falling.

Gallen held the Astros to 2 ER on 6 hits over 6 innings, while striking out 6. Gallen split time with the Marlins and Diamondbacks during his 2019 Rookie Campaign and despite a 4.05 BB/9 he pitched well otherwise, striking out batters at a rate of 10.8 K/9 with a 2.81 ERA while holding batters to a .211 batting average against. Its more of the same this year over a few starts as the walks are still troubling (5.40 BB/9) but had a 13.5 K/9 and other than allowing runners to score via the longball he has virtually stranded every baserunner to reach (98.2% lob rate). The 25-year-old is making good on his 2019 AAA season where he had a 1.77 ERA and 11.04 K/9 over 91 innings. Walks are truly his Achilles heel; otherwise he has the making of a nice young arm for Arizona.

Freeland tossed 6 and 2/3 innings allowing 3 ER on 8 hits while striking out 2. He cruised through 6 innings before allowing all 3 ER in the 7th. Freeland turned in 2 starts good enough for wins to open the season and this one continues the trend although he probably stayed in 1 inning too long. While his K rate (6.75 K/9) and walk rate (3.00 BB/9) are on par with his career numbers after a few games Freeland has a slightly above-career average GB rate (50%) and that coupled with a low babip (.173) have led to a 93% strand rate thus far. For someone who pitches their home games at Coors Field, those numbers don't seem sustainable. It remains to be seen if the Rockies get the 2018 Freeland who posted a 2.85 ERA and 8.5% HR/FB or last years whos ERA ballooned to 6.73 as did his home run rate (21.7%). I think he will settle somewhere above the 4.00 ERA mark as he did during his Rookie season.

Bell went 0 for 3 with a walk and 2 Ks Thursday afternoon. Bell finally broke out with a 3-hit game Wednesday hitting his 2nd home run of the season but struggled again Thursday. Bells average (.208) remains extremely disappointing and it's even more troubling that his babip (.276) is only slightly below his career mark. His plate discipline has been extremely poor in 2020 as he is swinging at 40% of the pitches he receives outside the zone, with a 19.9% swinging strike rate - nearly double his career mark. This has led to a dismal 2% walk and 31% K rate - quite the swing for a player who has a career walk rate of 12% and a career K rate of 18.5%. Bell was a streaky hitter last year so hopefully he gets things going soon.