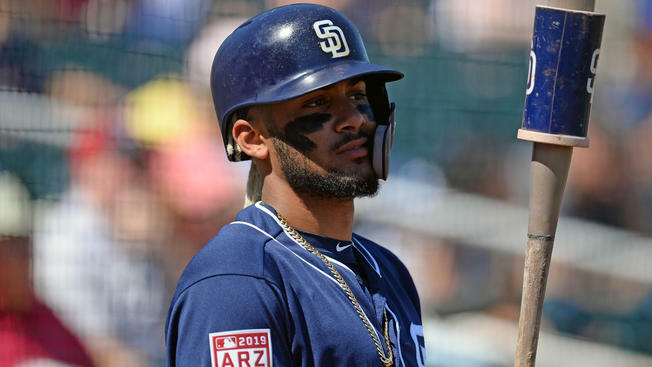 Fernando Tatis Jr - Tatis looks bigger to me this season, which stands to reason since the kid is probably still growing at barely 21 years of age. That came to mind when I watched him hit his 3rd homer of the year on Monday, and again when I noticed he was 2nd on the early exit velocity leaderboard. I'd like to give it another week or two before talking about any improvement in his plate discipline (it's there through 10 games, whatever that means), but he's a true 30/30 and possibly even 40/40 threat over a full season. If that plate discipline improvement is for real, look out. I'm believing in the long-term power more and more here.

Chadwick Tromp - Chadwick Tromp is a killer baseball name. He's also a suddenly valuable commodity as a catcher with power that has stumbled into a bunch of playing time. With SF not playing like a massive pitchers park this season, there are some bats that have some value all of a sudden, and Tromp is a really interesting case. He's only 25 but spent 7 seasons in the Reds organization, showing next to nothing until last year, where he suddenly started hitting the ball in the air. He hit 9 homers in 42 games between A and AAA, eclipsing every single-season total of his career, and now he's hit 2 in his past 2 games as the Giants starting C. There's a lot of swing-and-miss in his "new" game it appears, but the Giants were talking about this guy back in the spring, and once Posey opted out they seemed keen to give him a chance. The catching position isn't quite the wasteland it was a year or so ago, but are there 20 you like? There aren't for me, which puts Tromp squarely into my top-20 and onto the radar in 2-catcher formats and deeper leagues.

Dominic Smith - The sudden departure of Yoenis Cespedes will benefit Dom Smith more than any other Met, I'm guessing. Stuck in that pinch-hitting wasteland in a DH league, Smith will be at either DH or in LF most days going forward, as he was in Monday's game in Atlanta where he was 0-2 with two walks and a run. Smith has the potential to be an above-average bat in terms of both AVG and power, and with the newfound playing time he seems like an easy add to me in all but the most shallow of formats.

Sonny Gray - Gray was terrific again on Monday, allowing 1 earned run (2 total) over 6 innings against the Indians, walking 2 and striking out 8. That's Gray's 13th straight start allowing 3 earned runs or fewer, and he hasn't had a start in which he allowed more than 4 runs since 8/1/18, making him about the most consistent SP in the game right now. Amazing for anyone that remembers his Yankee tenure to be sure, but with the swinging strike rate and GB rate both up again I'm buying into this version of Sonny Gray. Sure, the control isn't likely to have improved this much this late in his career, but everything else looks pretty legitimate, and I have no issues with his value as a SP2 right now. He looks like an easy top-20 SP to me, possibly top-15 when you start incorporating the injured arms.

Trent Grisham - Grisham homered and walked on Monday, giving him 4 bombs already for the season. The AVG last year can be deceiving, as Grisham really has both an impressive understanding of the strike zone and very solid contact ability.....he just hits the ball in the air a ton, depressing the batting average. He can run as well (he already has a couple steals this year after only one all of last season), and at just 23 years of age I'm surprised more folks aren't higher on him. I think he's easily a top-60 OF right now, and hes obviously still in that growth phase as a player. Huge ceiling here....should be owned across the board.