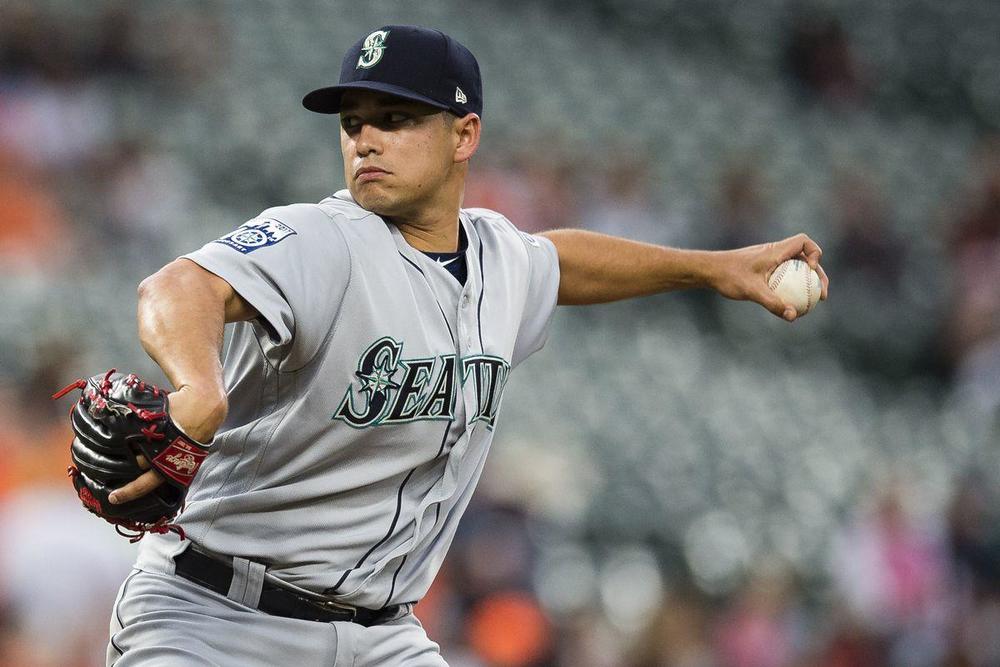 Gonzales was fortunate to pick up a win on Monday after allowing five runs in six innings, but a Mariners comeback lifted his record to 6-2. He was not at his best, but even a mediocre Gonzales is starting to provide unexpected results. It was the fourth time in his last five starts with at least seven strikeouts. He allowed one walk, only his fifth of the season. Gonzales is heading for his third straight productive season. With 86 starts under his belt and 3-year ERA under 4.00, it's time to start considering this more than just good luck. In fact, although Gonzales' skillset isn't sexy (high-80's fastball/cutter, curveball, changeup), he does have a useful skill: limiting baserunners. Entering Monday's start, Gonzales ranked third in all of baseball in WHIP. The other guys in the top 5? Maeda, Bauer, Bieber, deGrom. That's pretty good company. How has he managed a sub-0.90 WHIP? It's based largely on weak contact but mostly on eliminating walks. Gonzales has allowed five bases on balls in 56.2 innings. He has done that by pounding the zone more than ever, and yet batters are still making worse contact. When they do make contact, it's fairly weak contact. His 86.4 mph average exit velocity ranks in the top-20 among pitchers with at least 100 batted ball events. The weak contact partially explains his low BABIP allowed, although there will eventually be a slight adjustment to the mean on that. Gonzales even has a career-high strikeout rate this season, and it is supported by a higher chase rate and swinging strike rate. You certainly aren't investing in him for the strikeouts, but he has at least improved in that category. He's not a player most people target in their drafts, but after three years of solid production it's time to start considering Gonzales' contributions in ERA, WHIP and even wins. Furthermore, he is excellent at home and often overlooked in DFS. Keep that in mind.

Stewart struck again, hitting a home run in the 3rd inning of Baltimore's offensive boom on Monday. Stewart's late-season callup from Baltimore's alternate training site has been a revelation for the Orioles. The 26-year-old outfielder has seven home runs in 11 games since returning to the big leagues two weeks ago. Prior to the recent hot streak, Stewart's career has been a dwindling mess. His .220 avg, .165 ISO and 92 wRC+ were below expectations for the former college star. However, Stewart tinkered with his swing multiple times since dominating the ACC for Florida State. What remained consistent throughout his professional career is a good EYE. His swinging strike rate is elevated, particularly this year, but he walks at such a high rate that it balances out a relatively high strikeout rate. The key is that swing. In this recent stretch, his barrel rate is superb, a product of an average exit velocity over 91 miles per hour and a launch angle nearing 20 degrees. The correlating concern is the increased launch angle leading to too many flyballs, which will negatively impact his batting average. In fact, his expected batting average is .181. While that xBA will improve as his swinging strike rate regresses to normal, Stewart will never profile as an above-average hitter. The question for fantasy owners is whether he can continue his gains in power, and that is doubtful as well. First of all, his 50% HR/FB rate is obviously out of whack, but there's also been some luck in this small sample size with how he's hitting the baseball. He is hitting less line drives, which leaves his ISO at the mercy of a whole lot of flyballs. Fortunately for Stewart, half of them have luckily landed over the fence. It won't continue at that rate, and his home runs will slow, which will bring into question his value as an everyday starter with a low batting average and regressing home run totals. It's a good time to ride the hot hand right now, however.

Gonzalez was scratched prior to Monday's game with an illness. The team clarified it is not COVID-19 related, but he was unable to go on Monday and is day-to-day. Gonzalez opened the 2020 season on a relative hot streak, and he is looking to close the season strong. He has a home run in each of his last two starts, but his overall numbers are disappointing. Surprisingly Gonzalez has been more tentative at the plate. He is swinging at far less pitches in the strike zone and isn't attacking mistake pitches as much. The passiveness is no more evident than his 21.1% swing rate at first pitches. Last year that number was 32.8 percent. Overall he is swinging nine percent less than last season. That has to be a conscious approach, and while it is obviously leading to more walks, it is also leading to less quality contact. Not swinging at bad pitches is not good for one's hitting profile. Nonetheless, the recent surge is promising and could foreshadow a promising end to an otherwise disappointing season.

Murphy continued his hot streak with his fourth home run in the last seven games. Murphy's numbers are starting to align with his minor league averages. He is a very patient hitter and makes good contact (78.1% this season) and is obviously capable of hitting with some pop. His home run totals were never eye-popping, but he consistently posts ISO's over .200, and that is continuing in his rookie season (.228 ISO). What is most encouraging is the high walk rate and hard hit rate. Murphy's 92.2 average exit velocity is elite. His 17% walk rate is also near the top of the league. At 25 years old, Murphy is developing into one of the top fantasy catchers in the game.

France was quiet in Monday's doubleheader, hitless in six at-bats, but he is otherwise thriving in an everyday role for Seattle. Since getting traded from the Padres, France has a .465 wOBA and .667 slugging percentage. He has two doubles, one triple and two home runs. He settled into the 2-spot in the Mariners lineup and is making an argument to continue as an everyday player. France is only one year removed from hitting 34 home runs combined between AAA and MLB. The raw power is undeniable, and it has been on display more with the M's than the Padres. Five of his hardest hit balls have come since the trade. Meanwhile, he should carry 2B/3B eligibility into the 2021 season. There is a lot to like about France in 2021.