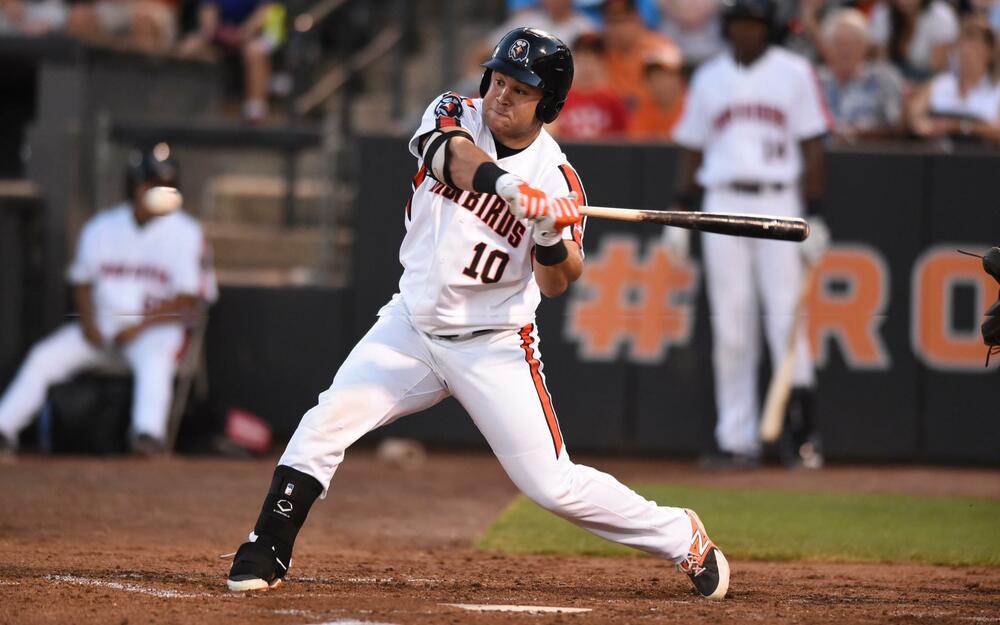 DJ Stewart (OF - BAL) - Man, is DJ Stewart on a heater. After a 3-3 day Wednesday, Stewart is 8-14 with 5 HR over the past 4 games (he's also walked twice), tallying 8 R and 7 RBI over that stretch. Stop me if you've heard this before, but Stewart is a pull/FB-heavy bat with contact issues. He does know the strike zone better than most and has a touch of speed, which pushes him a bit above the generic new-age power prospect, but there's still a decent amount of swing and miss here in a profile that will already be BABIP-challenged. I prefer Santander and Mountcastle in the O's OF going forward, and then it's going to be a battle to see who can stick between Stewart, Hays, and Mullins.....without even dealing with the eventual return of Mancini. There's suddenly some talent jumping up here, which is great for a fanbase that has had a lot of misery to deal with for quite some time...not so great for mediocre OF prospects though. I can understand grabbing Stewart when he's hot like this, but outside of OBP-oriented leagues I don't have a ton of long-term interest right now.

Cedric Mullins (OF - BAL) - Ced Mullins has hit in 6 straight after another pair of singles on Wednesday, and most importantly for fantasy purposes, he swiped his 5th base of the season in just 30 games. Speed is definitely the biggest thing that Mullins brings to the table, and the fact that he's hitting at the top of the order when he plays in huge. As far as contact and power go, Mullins grades out as average and average-minus for me respectively, and that's the real issue: I don't think he's good enough to play every day when the O's OF is fully healthy. For now I don't mind him as an injury replacement, especially for the steals, but he's probably only their 4th or 5th best guy out there at full strength, so I don't like him longer-term.

Dane Dunning (SP - CWS) - Dunning has looked great twice and mediocre twice through 4 MLB starts now, after holding the Pirates to 3 hits over 6 shutout innings on Wednesday. Dunning has had about as friendly an introduction to the bigs as you can ask for, facing the Royals twice and the Tigers once prior to matching up against the 29th-ranked Pirate offense. The positives here are a really heavy sinking fastball that he throws with decent command and a solid slider/cutter that can miss some bats. There aren't really any negatives to speak of other than the TJ surgery that he just returned from a few months ago, just a sense that the overall arsenal doesn't quite add up to "frontline starter" status. That's fine....not many guys have that sort of arsenal, and I think that Dunning can comfortably slot in as a top-50 arm already. The schedule gets a bit tougher from here, as the Twins and Reds (in Cincy) are up next for the 25 year old. I would treat him like an SP5 for the rest of the way, so if that's good enough to start for you, go nuts. I think you'll be pleased without being ecstatic about it, at least as much as anyone can project a start or two.

Deivi Garcia (SP - NYY) - Garcia tossed his 2nd quality start in his 3rd career MLB outing, going 7 strong against the Blue Jays in a must-win game for NY, allowing 5 hits and 2 runs while fanning 6 without walking a man. My two biggest concerns with Garcia coming into the season were his control and the amount of flyballs he allows, and thus far the control looks much better than I've seen him show in the minors. I do think he will allow some homers, but there aren't too many pitchers that don't these days, and he's done a good job keeping the ball off the fat part of the bat most of the time during his pro career (outside of AAA last season). He's looked very solid thus far, and the curveball is a real put-away weapon for him. I didn't think that he was quite ready yet to start the year, but he looks ready to me through three outings now, and since the Yanks need him that's a good thing.....he's certainly worth an add in all formats, and the schedule for the last three starts is somewhat favorable (TOR, @BOS, MIA) as well.

Matthew Boyd (SP - DET) - I'm not sure, in 20+ years of writing about baseball, that I've ever been as wrong about a player as I've been about Boyd this season. Maybe Nick Johnson. I'm certainly not advocating anyone go out and grab Boyd, despite the fact that his last few starts prior to Wednesday were fairly solid, but there's just a crazy amount of bad luck here to go along with the subpar performances. The hard contact rate is down from last year, the swinging strike rate has remained excellent, the control has been pretty solid...the xFIP of 4.27 isn't great, but it isn't terrible either. The BABIP of .330 coming into Wednesday is pretty high for a flyball pitcher, the HR/FB rate of 23% is absurdly high, and the 7.63 ERA after the outing has to be a good 3 runs above the xFIP. You can't roster him in good conscience right now, but somehow the sum of the parts is a lot less than the parts themselves right now....he's really pretty solid a lot of the time, and then before you blink 4-5 runs off a pair of homers happen. I won't necessarily be off of him come spring of 2021....he could be a pretty good value if he can get whatever is preventing the skill set from being maximized ironed out, but he's dead to me for the rest of 2020.