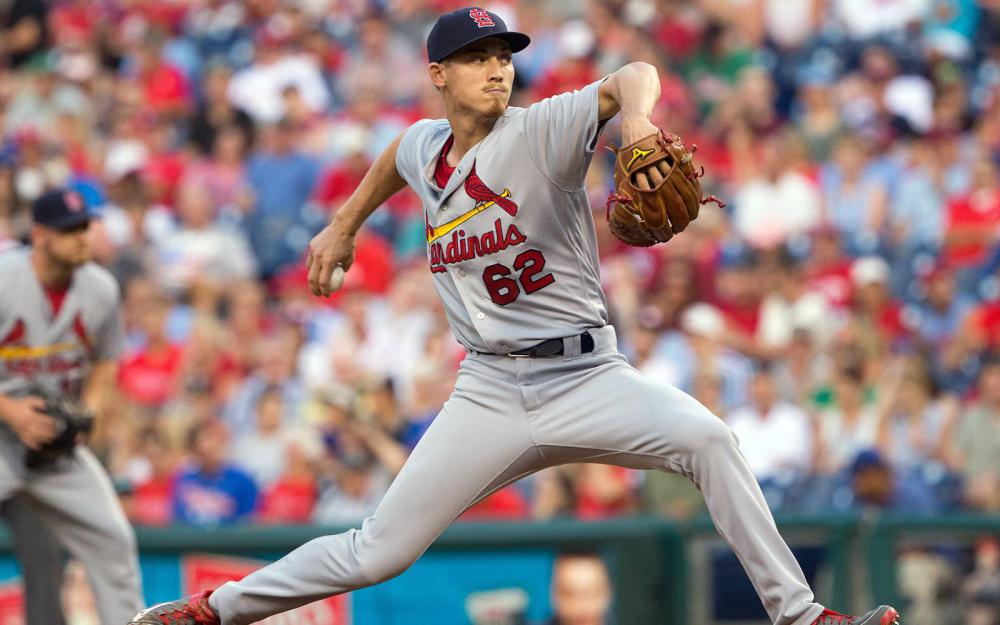 Pearson progressing but won't be ready by opening day

The Jays top prospect Nate Pearson (groin) is reportedly throwing a bullpen session today but won't have enough time to get fully stretched out by the time the season begins. Pearson suffered a grade-1 groin strain in his first spring outing on the 1st and will be eased back into the rotation. The massive 24-year-old is ranked 10th on MLB.com's "Top Prospects" list for 2021 and will have a chance to prove himself this season should he get healthy. Pearson has never endured the rigors of a full season, so the Jays will likely be exceedingly careful with his workload in 2021 regardless of the injury. The youngster didn't fare well in his first MLB action a season ago, posting a 6.00 ERA and 6.5 BB/9 in 18 innings of work. He has a lively fastball (96.6 vFA in 2020) and works in three offspeed pitches to compliment it. His future still appears bright; however, his fantasy contributions appear quite limited for 2021.

The Jays signed Kirby Yates to a one-year deal to be the closer, presumably. Yates' 41 saves in 2019 lead the league, but he pitched just 4.1 woeful innings last year before getting injured. He had surgery in August to remove bone chips from his throwing elbow, and though he seems to be on track for opening day, the injury is a worrying prospect for a soon-to-be 34-year-old. The closer role will be all Yates' if he can prove he still has the ability to be even near the pitcher he was in 2019 when he posted a ridiculous 1.19 ERA and 7.77 K/BB. However, 2019 was a long time ago. If Yates struggles at all early on (like he did in 2020), the Jays have other options in the bullpen like Jordan Romano, who is coming off a stellar 2020 campaign (1.23 ERA, 12.89 K/9).

The top four slots in the Sox batting order are virtually locked: Verdugo, Bogaerts, Devers, Martinez. This is a solid quartet, but the lineup REALLY drops off after that. So the 5th spot in the order is basically up for grabs to whoever can display consistent production. Hitting behind such quality bats makes this spot in the order a coveted one for fantasy production.

The 30-year-old backstop showed much improvement at the plate the last two seasons. Since the start of the 2019 season, Vazquez leads all catchers (min. 400 PA) with a .278 batting average and ranks sixth in total home runs (30). He has improved in basically every statistical area each of the last three seasons and should be a smart choice at catcher even if he doesn't consistently bat in the desirable 5th spot.

After bursting onto the scene a season ago, First Base appears to be Dalbec's job to lose here in 2021. In 2020, the 25-year-old hit eight home runs and posted a whopping .400 wOBA in his first 92 MLB plate appearances. However, he also sported a hefty 42.4% K% and 21.2% SwStr%, which will make that kind of production difficult to replicate. His 44.4% HR/FB and .394 BABIP are also unattainable figures. So it's unlikely that Dalbec displays the kind of power production that he did a season ago. Although, he already has four home runs this spring (in just 18 at-bats) and has the potential to far exceed his ADP (currently ranked outside the top-30 1B on ESPN)...especially if he finds himself batting 5th.

Are Bumgarner's days as an Ace behind him?

Madison Bumgarner came to the desert last season to bring some stability to a perennially drab Diamondback pitching staff. However, he was anything but stable. He went 1-4 and posted career worsts in most statistical categories, namely ERA (6.48), WHIP (1.44), K/9 (6.48), and HR/9 (2.81). At 31, he isn't over the hill just yet, but thinking he will be the Ace he was in San Francisco ever again is probably foolish. Injuries mounted up for Bumgarner in the latter seasons of his SF tenure, and his numbers have basically been on the decline since 2016. His vFA was all the way down to 88.6 last season, and Chase Field is not a pitcher-friendly park. He should still be a decent fantasy option but his days as a low 3.00 ERA guy are probably a thing of the past.

With Nolan Arenado gone, McMahon will get his first shot at full-time duties in the hot corner. The 26-year-old has mainly played second base for the Rockies the past two seasons, but his bat hasn't developed as many had hoped. McMahon does have 33 home runs since the start of 2019, but his triple-slash line comes in at an unenthusiastic .241/.320/.442. Coors Field's aid has certainly helped him; however, his .201 career average away from home is worrisome. His Hard%/Soft% delta of 29.3% over the past two seasons gives reason for optimism; however, his 30.9 K% will have to be vastly improved upon if he is going to find sustained success at the major league level.

The Arenado departure has also paved the way for Rodgers to play in the Rockies' infield consistently. He hasn't shown much offensively in his brief MLB career, but he is just 24 years old and should be given time to start figuring it out here in 2021. In 102 major league plate appearances, he has a .196/.235/.227 slash line and has yet to hit a home run. It's unlikely that Rodgers will factor into the fantasy scene just yet, but he does have a pair of homers and a 1.058 OPS in 21 at-bats this spring, for what that's worth.

Price hurled three shutout innings on Friday, giving up just one hit and striking out a pair. The 35-year-old opted out of the 2020 season, so it is hard to know what kind of pitcher he will be in 2021. Price's last campaign in 2019 ended as one of his worst statistically, but he was actually pitching quite well before a wrist injury derailed his season. Price joins a loaded pitching staff in LA, and there is talk of him potentially working some out of the bullpen. If that were the case, Price's fantasy value would be all but nill, and even if he does have a spot in the rotation, the aging pitcher will still be a considerable risk.

Wong went 0 for 2 out of the leadoff spot on Friday, bringing his preseason batting average down to .091. Preseason numbers don't mean much, and Wong has only been up to the plate 10 times thus far. The gold glove second baseman dealt with inconsistencies at the plate throughout his tenure in St. Louis. He put together his best full season in 2019 when he slashed .285/.361/.423 with 11 homers and 24 stolen bases. He digressed a bit last season (1 homer, .265/.350/.326) but managed to improve upon his SwStr% (-1.4%) and O-Swing% (-4.1%). At 30, he should still be able to be impactful on the basepaths and will have the opportunity to get on-base ahead of Christian Yelich and Co. He isn't a top-flight fantasy 2B by any means, but he could be a valuable add near the end of the draft.

Rogers retired the side in order while striking out two in his one inning of work on Friday afternoon. It's not much, but it's positive. If Rogers is going to get the bulk of the save opportunities this season, he will have to prove himself early and often. His struggles last season paired with Alex Colome and Hansel Robles' arrivals means that Rogers' stellar 2019 campaign won't afford him much leeway in the closer role. Rogers amassed 30 saves with a tidy 2.61/2.84 ERA/xFIP and a 28.4% K-BB% in 2019. Last season those numbers dipped to 4.05/3.28 and 22.0%. Rogers should open the season as the main closer for Minnesota; however, manager Rocco Baldelli likes to play matchups in the late innings and is unlikely to have one solidified closer. So even if Rogers does bounce back, he may not be as valuable if your league mainly rewards relievers for saves.

Seager has been crushing the ball this spring. He has tallied three homers and an incredible 1.416 OPS in 19 at-bats thus far. After his big bounce-back season in 2020, this is an encouraging sign that the 26-year-old is truly back in the conversation for the best offensive SS in the league. He slashed .307/.358/.585 with 15 homers last season, and his .394 wOBA ranked 2nd amongst qualified shortstops. Batting in the heart of the World Series Champions lineup, Seager is a virtual lock as a top-5 shortstop for fantasy in 2021.

Grandal will serve as DH in a pair of B games over the weekend as he continues to work his way back from knee inflammation that has hampered over the last month. He appears to be on track for opening day, but he isn't young anymore, and knee issues are particularly detrimental for catchers. He will probably have to primarily DH at the start of the season and hopefully work his way back to duties behind the plate.

Senzatela (hamstring) threw a bullpen session on Wednesday and a two-inning simulated game on Friday. Barring any setbacks, he has a decent shot at being in the starting rotation when the season starts. The 26-year-old is coming off his best season in the majors. He posted a 3.44 ERA and 5-3 record in 2020. However, his putrid strikeout numbers (5.03 K/9 in 2020) and playing his home games at Coors Field make him a risky fantasy option for 2021.

Mikolas has been dealing with shoulder soreness since February and will be shut down for the next 7 to 10 days. He had an MRI on Thursday that showed there was no structural damage to the shoulder. This is welcomed news for Mikolas, but it appears he still won't be ready come opening day. Hopefully, there will be a more definitive timeline for his return in the next week or so.

Grisham injured his hamstring during San Diego's game on Thursday. Yesterday the team reported that it was a mild strain, so he may yet be available come opening day. The Padres offense is stacked, so they will certainly approach the injury with caution and make sure he is truly 100% before putting him back out there.

Tweets by Fantistics
Preseason Prep - March 12, 2021
InsiderMetrics: Triangulating Batted Ball Speed & How To Use It