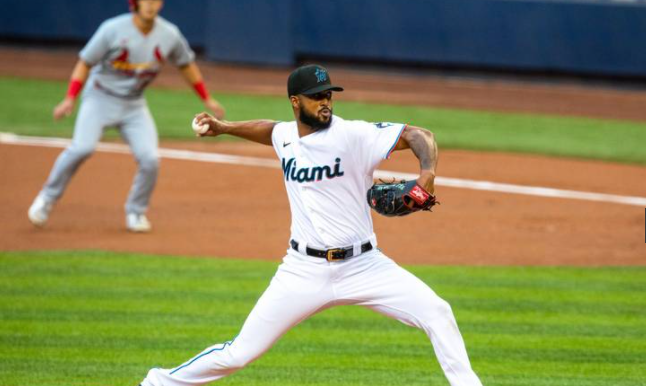 Sandy Alcantara, Miami Marlins - Sandy Alcantara dominated the Cardinals on Tuesday striking ten batters over six innings. He allowed four hits and two walks, along with three runs and only two were earned. Under the hood though Alcantara was even better. He had three pitches with over a 30% CSW (Sinker-41%, FB-39%, CH-32%) and his fourth offering of a slider had a 24% CSW. His velocity ticked up across the board, and his fastball was averaging 97.5 MPH while he changeup was sitting at 91 MPH. Alcantara is one of my favorite pitchers this year and am expecting a huge season for him this year.

Omar Narvaez, Milwaukee Brewers - Omar Narvaez homered for the second straight game and he's been on an absolute tear to start the season. He's hitting .500 across four starts with the two homers and five RBI. His statcast profile is very interesting because he's never really hit the ball hard, but has had a solid average launch angle that's allowed him to still post solid power numbers. He hit 22 homers for the Mariners in 2019 while hitting .278 and his xwOBA was .324. He's in a significantly better home park than he was in Seattle, so there's a chance for more power than he did in 2019 and he's still available in over 95% of ESPN leagues at this point. Catcher stinks, so it's something to look at.

Ryan McMahon, Colorado Rockies - Ryan McMahon swatted three homers on Tuesday to push hit total to four early in the season. He's taking every advantage early of the Rockies giving him everyday playing time and is slashing .467/.467/1.333. The issue with the young Rockies players has never really been talent, but rather the fact that the Rockies just don't play them for whatever reason. McMahon has been primarily starting at 3B for Colorado after the Nolan Arenado trade there's no real competition for him at the position. Keep rolling him out in lineups, especially in home matchups for Colorado.

Edwin Rios, Los Angeles Dodgers - Edwin Rios went 2-for-4 at the plate on Tuesday with his first homer of the season. Rios showed promise at the plate last season but fell victim to the fact that the NL lost the DH and he's been relegated to bench duties unless the team plays in an AL park. With the Dodgers in Oakland this week Rios has gotten two straight starts at third base while Justin Turner slides over the DH. Rios is worth throwing in deeper lineups when he does start due to his ridiculous power and makes for a cheap DFS play when the team faces an American League team.

Aaron Sanchez, San Francisco Giants - Aaron Sanchez started for the Giants and allowed one run over five innings. He allowed six hits and struck out four batters while not walking a single batter. Sanchez's curveball remains a dominant pitch even with his health struggles in recent years as he threw the offering 30% of the time and generate a 36% CSW against it. Every pitch he threw generated a 25% or higher CSW, but the total for the start is right at a league average of 30%. He's always someone that will be intriguing for me based on the stuff but it always feels like an injury is around the corner. San Francisco though has done a fantastic job with pitching lately and Sanchez could be the most impressive revival yet if he can continue to throw to this quality.