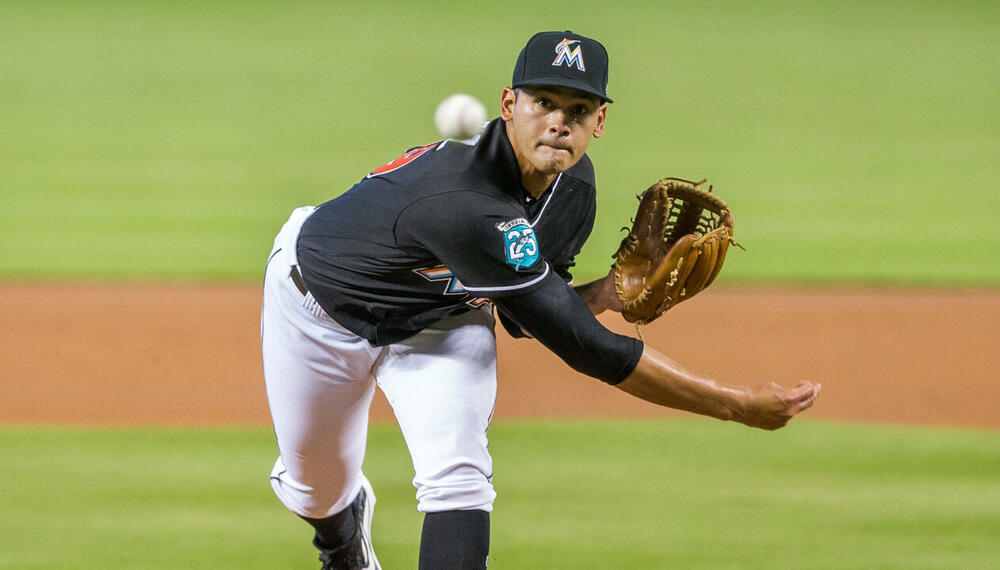 Lopez pitched well on Friday, shutting the Rays out over five innings with four strikeouts. The Marlins had somewhat of a quick hook for Lopez on Friday as he was removed after 77 pitches, and although that's partially understandable because it's Lopez's first start of the regular season and because the team is likely to be cautious with pitcher workloads this year, Lopez averaged only 82 pitches per start last season and shouldn't be counted on to work very deep into starts this year as a result. Importantly, the slider that Lopez is working to develop (what was last season's cutter) looked good on Friday, picking up five additional inches of horizontal movement compared to last year's cutter. Lopez still only threw the pitch 10 times on Friday and it likely still has room for improvement, but Lopez's slider is something to watch going forward and gives him unusual in-season upside. Fantasy managers should expect Lopez to continue his solid production going forward and monitor his slider usage and effectiveness going forward -- if the pitch becomes a real weapon, then Lopez should be a legitimate fantasy ace with his workload being his only major drawback.

Chisholm reached base for the first time this season on Friday, picking up two hits (including a triple) and walking once against the Rays. Chisholm has displayed uncharacteristic power so far this year with four hard-hit balls already (he hit only 11 total in 21 games last season), and his 108.6 mph max exit velocity (set on Friday) was 2.6 mph higher than his max exit velocity last season. Encouragingly, Chisholm has also been more aggressive at the plate so far this year after a 21.3% called-strike rate fueled his ugly 30.6% strikeout rate last season, though fantasy managers should remain skeptical about changes in his plate approach without a larger sample. A power outbreak on its own probably isn't enough to make Chisholm rosterable for most fantasy managers, but if he's able to post around league-average contact quality while getting his strikeout rate down then he's worth a look from managers in need of stolen bases, and fantasy managers should keep an eye on Chisholm's development over the next few weeks.

Turner went 3-for-5 with a double and three RBI against the Rockies on Friday. Inconsistent health has made Turner one of the most underappreciated fantasy assets in all of baseball, and Turner should once again be a quality fantasy option at third base when healthy this season. Since joining the Dodgers in 2014, Turner has had only one season with an OPS below .850 (he posted a .832 mark in 2016), and he's had more seasons with a batting average above .300 (four) than below (three). If that's not enough, Turner hits in the upper-third of a loaded Los Angeles lineup that provides him with plenty of run and RBI opportunities -- the only fantasy category that Turner doesn't provide value in (when he's healthy) is stolen bases. With that in mind, Turner should be a consistently valuable DFS option this year, and he's well worth the injury risk in full-season leagues.

Lux picked up a pair of hits against the Rockies on Friday, including a triple. Lux has now started back-to-back games for the Dodgers after struggling in a brief 19-game MLB stint last season, and he's played well so far this year. After doing a poor job hitting for power last season with a 27.3% hard-hit rate, Lux already has three hard-hit balls this season, putting him on pace for 29 hard-hit balls in 19 games (Lux hit only 12 hard-hit balls in 19 games last season). Lux also demonstrated elite speed on Friday with a 30 ft/sec sprint speed on an infield single, a reminder of his threat to produce on the basepaths as well as at the plate. Lux almost certainly won't stay this hot all season, but his early showing has been impressive, and fantasy managers would be wise to invest in the 23-year-old while they still can.

Hosmer hit well again on Friday, clubbing his second home run in two games as part of a multi-hit effort. I came into this season skeptical of Hosmer's ability to maintain his elevated launch angle from last season this year, but his two home runs in his first two 2021 games might suggest that I've been too pessimistic. Of Hosmer's 5 batted balls tracked by Statcast so far this season (one was missed), though, three have come with negative launch angles, and two have come with launch angles south of -20 degrees -- hit right into the ground. For some background, Hosmer posted a career-high 8.7-degree average launch angle last season to fuel a strong offensive year with a .851 OPS, but he's had similar high launch-angle streaks in the past, and he made no significant (publicly noted) swing changes in 2020. Fantasy managers should consider trying to sell high on Hosmer as a result; his 2021 performance so far has done little to change my view that his launch angle will likely revert to pre-2020 numbers, taking his overall performance with it.