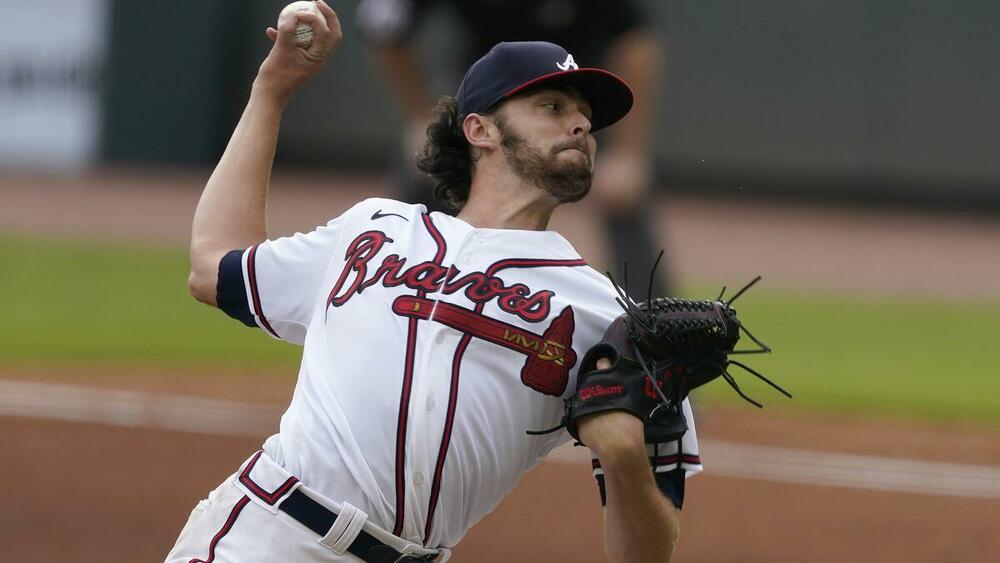 Ian Anderson (SP-ATL) fared well against the Brewers on Saturday as he gave up just 1 run on 2 hits and 4 walks while fanning 4 over 6 innings of work. The young righty tossed 61 of his 110 pitches for strikes in the contest. He has put together a quality 2021 campaign so far, as he now owns a 3.20 ERA, 9.4 K/9, and 4.1 BB/9 through his first 8 starts (45 innings) of the season. His 3.38 xFIP indicates the ERA is right about where it should be. The walks are obviously concerning, but his ability to miss bats (12.5%) paired with an tendency to induce grounders (55%) helps to minimize the damage. Opposing hitters have mustered a 44% hard-hit rate against Anderson, which has likely contributed to his 16% HR/FB, and his inefficiency means that he won't often pitch into games. But he's shaping up to be a solid #2-3 for fantasy. Anderson lines up for a start at home against Pittsburgh next week and is definitely a must start in that one.

Johnny Cueto (SP-SF) lasted just 4.1 innings against the Pirates on Saturday as he gave up 2 runs on 8 hits and no walks while fanning just 2. He threw 48 of his 72 pitches for strikes in the contest. The 35 year-old now owns a 3.62 ERA, 7.2 K/9, and 1.7 BB/9 through his first 5 starts (27.1 innings) of the campaign. His xFIP is now identical to his ERA, which suggests that the Cueto that we actually see is the Cueto that we should see. The 43% hard-hit rate per Statcast that opposing hitters have mustered against him is concerning, as is the 27% liner rate. He hasn't induced many grounders (36%), although his 77% contact rate is slightly down from his career average (80%). Cueto has never induced many swings and misses, but his 11% clip so far in 2021 is right around his career best. So, overall, I wouldn't be excited to own Cueto in fantasy but I also wouldn't be wanting to get rid of him - he's a solid #3-4 type SP for fantasy at this point in his career. He lines up for a road start against Cincinnati next week.

Dominic Smith (OF-NYM) went 2-3 with a walk and a run scored against the Rays on Saturday. The 25 year-old has not exactly burst out of the gates in 2021, as he is now hitting .252 with 2 dingers and 14 RBI through his first 120 plate appearances of the campaign. He seemingly broke out in 2020, when he batted .316 with 10 homers and 42 RBI across 199 plate appearances, but so far in 2021 he's struggled to make hard contact (just 32% per Statcast after he logged a 47% clip last season). Smith's HR/FB rate does seem really low at 8% after he logged an identical 22% clip in that department in both 2019 and 2020; that is likely due for some correction. With a .303 career BABIP in the majors, his current .313 BABIP indicates that his .252 average is not likely to climb much going forward (although it was .368 last year). Fantasy owners may have very well overpaid on draft day based on Smith overachieving in a shortened 2020 campaign but he does seem liable to produce more in the power department going forward.

Pete Alonso (1B-NYM) went 1-4 with a solo homer against the Rays on Saturday afternoon. The homer comes a day after the 26 year-old went 0-4 at the plate with 4 punchouts. He's now hitting .250 with 6 longballs, 18 RBI, and 21 runs scored through his first 137 plate appearances of the campaign. Alonso has showed patience at the plate (13% walk rate) and struck out at his usual 26% clip (1 more whiff on Saturday) while tending to hit the ball with authority (54% hard-hit rate per Statcast). His average exit velocity, in fact, sits at a lofty 95mph and he's logged a robust 19% barrel rate. Alonso has hit the ball to the opposite field a career-high 29% of the time while upping his flyball rate to 47% (43% career average). His ISO is climbing (up to .216 on the season) and should continue to do so if he continues to punish the baseball.