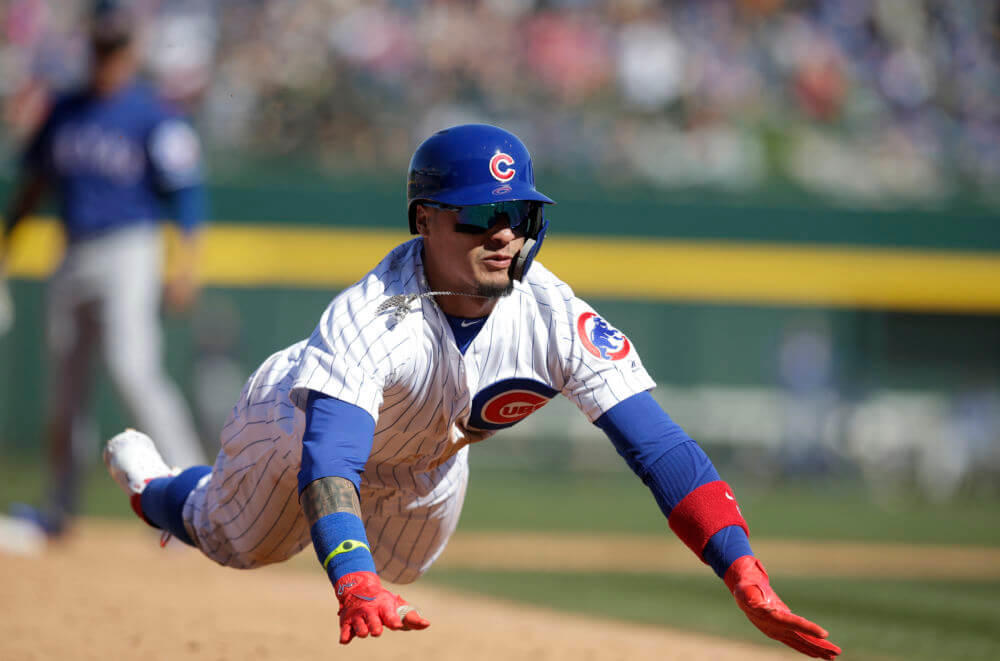 Fernando Tatis Jr. went 1-for-3 with a solo homer, two runs scored, and a walk on Monday against the Cubs. Tatis accounted for both Padres runs in their 7-2 loss, scoring the game's first run in the second inning after drawing a walk before smoking his NL-leading 16th big fly of the year in the sixth inning. That makes three round-trippers in four games for Tatis, who ends May with nine long balls, 26 RBIs, and 21 runs in 20 games this month alongside a .353 batting average. Tatis, who also leads MLB in slugging percentage, continues to prove why he's arguably the sport's top everyday player at just 22 years of age.

Javier Baez paced Chicago's 7-2 win over San Diego on Monday, going 2-for-4 with two home runs and three RBIs. Baez's fist multi-homer effort of the year featured a go-ahead two-run shot in the third inning followed by a solo blast in the seventh. The pair of bombs gives him 13 on the season, seven of which came in May. They also lifted his average to .260 and his OPS to .809. Since struggling during the first half of April, Baez has turned things around and is back to hitting like his old self. His 6:70 BB/K ratio is far from ideal, however, severely limiting his value in points leagues and OBP formats. His roboust power numbers remain elite for a middle infielder, however, making his worth starting in all fantasy formats.

Corbin Burnes settled for a no-decision on Monday after allowing one run on six hits and two walks with seven strikeouts in six innings against the Tigers. Burnes held Detroit scoreless for five innings before finally yielding a run in the sixth, but unfortunately for him Milwaukee didn't score until the sixth, either. The outing lowered Burnes' ERA to 2.24 on the year, while his incredible K/BB ratio now sits at 81:7 through 52 1/3 innings (all seven of those free passes were issued in May). Burnes has only allowed two home runs on the year as well, making him one of the most dominant and accurate pitchers in baseball for the second year in a row. He'll square off against the Diamondbacks at home in his next outing.

Johnny Cueto earned the win on Monday after holding the Angels to one run on five hits and no walks with five strikeouts over seven innings. Cueto had little trouble mowing down an Angels' lineup that has struggled to score runs lately without Mike Trout and Albert Pujols. It was also only the second time this year that Cueto completed at least six innings, lowering his ERA to 3.45 in the process. After several disappointing and injury-plagued seasons, the 35-year-old is authoring one of the most impressive comeback stories of the year. His 36:6 K/BB ratio in 44 1/3 innings has helped with that, as he's essentially stopped walking people and giving up homers. The veteran will look to keep limiting his mistakes when he takes on the Cubs at home in his next scheduled start.

Ronald Acuna Jr. went 2-for-4 with a solo homer and two runs scored on Monday as the Braves defeated the Nationals, 5-3. Acuna maintained his share of the NL home run crown with his second-inning solo shot, matching Fernandro Tatis Jr. with 16 long balls apiece. For Acuna, eight of his taters came in April while eight came in May. While his .224 batting average this month was disappointing, fantasy owners can't complain about his prodigious power numbers. As one of baseball's best young players at 23, Acuna is still making adjustments and growing as a hitter, so it's entirely possible that we haven't even his full potential yet.