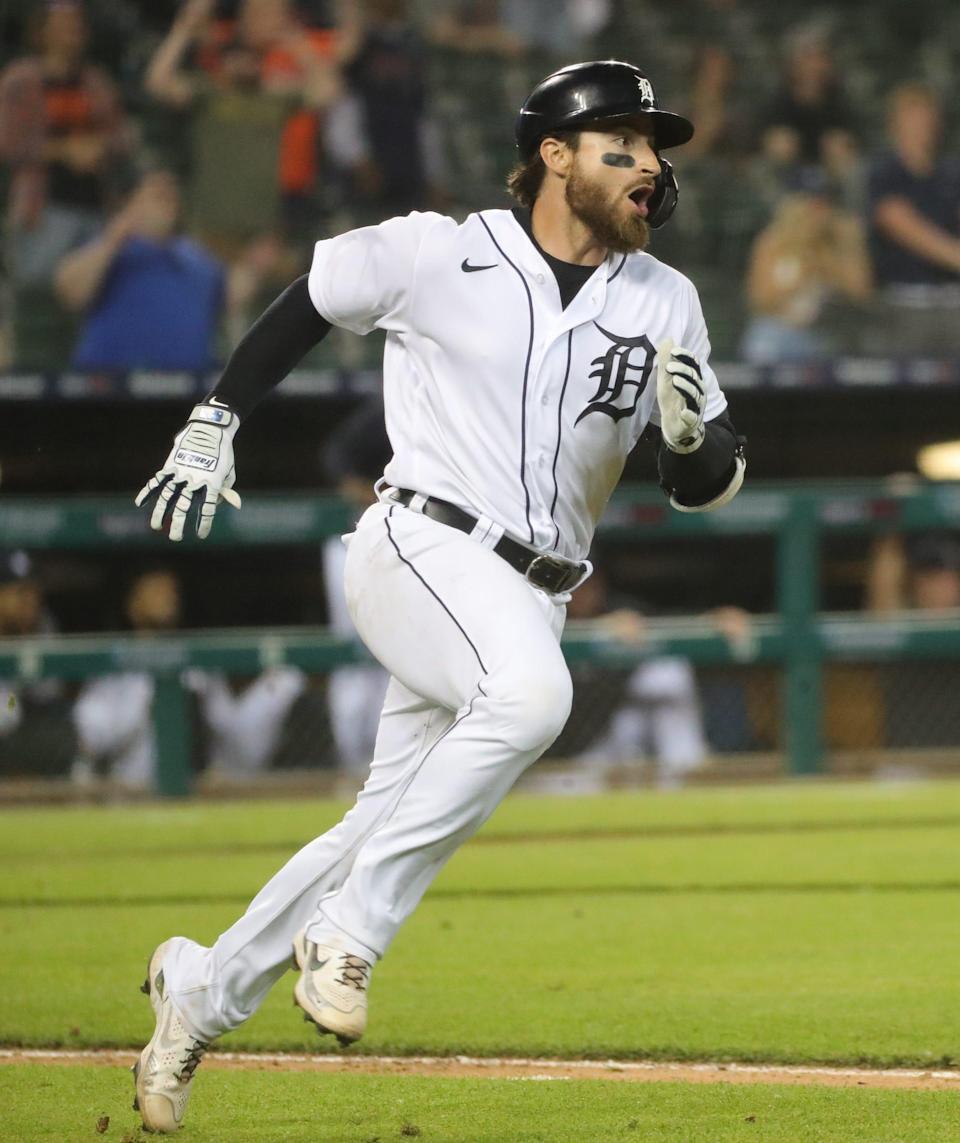 Haase smashed his 6th and 7th home runs of the Season Saturday. Anyone that took a chance on Haase a few weeks ago is reaping some strong power benefits as Haase has posted a .656 slug% thanks to 2 doubles, 1 triple and 7 HR over 18 games for the Tigers. Haase never did but in brief cups of coffee with The Indians and Tigers from 2018-2020 picking up just 6 hits in 49 at bats in that time. He has struck out in 30% of his plate appearances so far this year but has shown off power in the minor leagues posting 20+ home runs seasons from 2017-2019. From a fantasy perspective Haase has played both catcher and outfield this season, and incredible combination and is a recommended bench piece that can be plugged in on your catchers or regular outfielders off days. He has also shown a propensity to mash lefties with a .296 average and .988 vs them so far in 2021.

Vlad Jr. went 3-4 with his league leading 18th HR Saturday. After "struggling" through his first 2 seasons producing OPSs south of 800 in both, Vlad Has upped his game significantly to become possibly the premier hitting force in the AL. High ground ball rates plagued his first two season and while he has lowered that rate to 47% this year, a big time surge in barrel rate (8% last year to 15% this year) and hard hit rate (50.8% to 53%) have led to a huge .338/.439/.672 triple slash line with 47 RBIs and 44 runs scored to go along with the HR. If that wasn't enough he has almost doubled his walk rate from 8% to 14% this year, while cutting his K rate to 14.5%. He should be in a battle all season with Shohei Ohtani for the AL MVP Award.

While the Twins have underperformed including an 0-4 mark in June entering Saturday's game, Donaldson has put up solid numbers with a .806 OPS overall and has gone 6-18 in June while also reaching base via 3 additional walks and a HBP. His power has been a bit slow to start the season - but with 3 xbh in June he could be on his way to a power surge as he has hit the ball hard all season (21% barrel rate, 51% hard hit rate) but just a .465 SLG% - which would be his lowest mark since 2014. The big time hard hit metrics also give him a xslug% of .548 - a nice thing of potential things to come. I like for Donaldson to have a big June based on these numbers - now may be the final time to try to get the slugger before he goes on a tear.

Minor allowed 5 ER on 7 hits over 7 innings, striking out 5. Minor has been a bit of a mixed bag this year - pitching to a 4.65 ERA / 3.80 fip. Minor has held opposing batters to a .223 batting average against but walks have been an issue as his 8.7% BB rate is a career high. When batters have reached base he hasn't gone a great job of stranding them with a 67% LOB rate. What I do find interesting is that Minor is striking out batters at a 10.20 K/9 clip - tied for the highest rate in his career with his 2017 campaign when he pitched exclusively as a reliever and delivered a 2.55 ERA. While he has added a tick on his fastball this year, Minor is throwing about 15% less than a year ago and is throwing all his secondary pitches more. The mixing and matching of pitches seems to be delivering both more Ks and Walks, and the hope is Minor can get some better luck and pitch closer to his fip then his ERA for the remainder of the season.

Allard allowed 2 ER ( 3 total) over 5 innings, striking out 6 Saturday. After pitching well out of the pen for the Rangers, Allard delivered a decent start. While he has been susceptible to the longball this year (1.50 HR/9) he has racked up Ks (10.13 K/9) and generally limited walks (2.63 BB/9) while doing a good job of stranding runners (84% strand rate). Allard hasn't delivered in parts of 4 seasons at the big league level yet as he has a 6.00 ERA over 111 innings. Granted a lot of that is ballooned from his Rookie year where he got shelled for 11 ER in 8 innings with the Braves. Allard is just 23 and I wouldn't be surprised if he was given multiple outings as the Rangers try to see what they have in some of their youngsters.