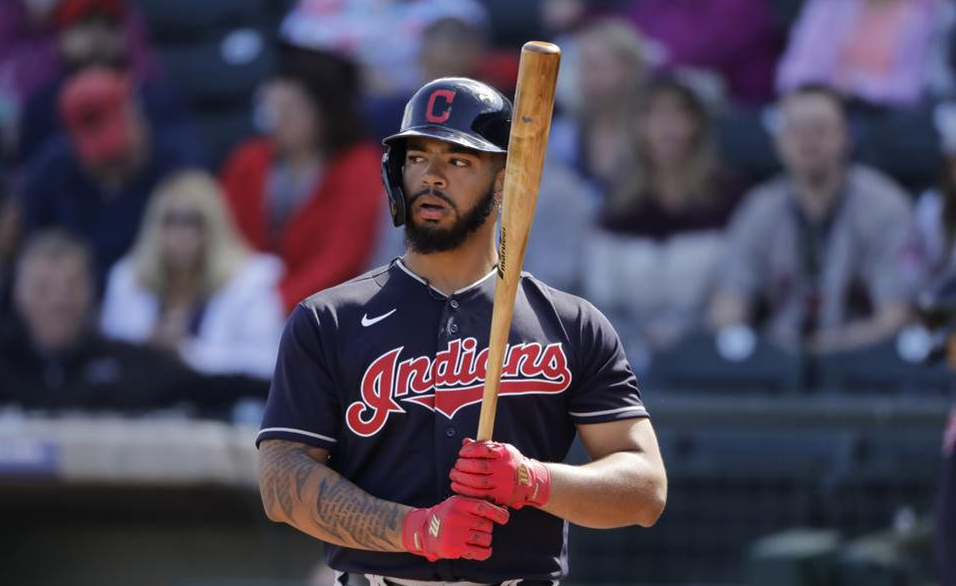 Bobby Bradley (1B-CLE) went 2-3 with a pair of solo homers in the first half of Wednesday's doubleheader with Detroit. The 25 year-old has provided plenty of pop since being recalled from Triple-A, as was hitting .265 with 8 homers and 17 RBI across 75 plate appearances through the first game of Wednesday's doubleheader. Encouragingly, he's slashed his strikeout rate to 25% (was 41% across 49 plate appearances in the majors last season and 32% in 109 Triple-A plate appearances this year) by reducing his o-swing rate to 29% (was 35% last year) and trimming his swinging-strike rate from 18% to 16%. But Bradley's hard-hit rate sits at a modest 36% and his HR/FB seems unsustainable at nearly 38%. Moreover, it's a bit concerning to see a slugger post a 53% groundball rate, although it's admittedly a small sample size we are looking at. The bottom line here is that although Bradley's long-term value is very much an unknown, he is producing right now. And that's all fantasy owners need to know.

Wander Franco (SS-TB) went 2-5 with a run scored, an RBI, and a stolen base against the Nationals on Wednesday. The 20 year-old rookie is taking a little time to adjust to the majors, as he is now hitting .194 with 1 homer, 5 RBI, 6 runs scored, and 2 stolen bases through his first 36 plate appearances. Encouragingly, he does not appear to be pressing or horribly overmatched at the dish, with a 17% strikeout rate and 14% walk rate attesting to his poise at the plate. Statcast shows a hard-hit rate of 43% to start his big-league career, and Franco has laced liners at a healthy 29% clip. He's not chasing many pitches out of the zone (21% o-swing) nor swinging and missing often (7% swinging-strike rate). Understandably, rookies - especially ones that arrive in the majors under extra pressure as highly touted prospects - can take some time to settle in. If you own Franco in fantasy, be patient.

Shohei Ohtani (SP-LAA) lasted just 0.2 innings against the Yankees on Wednesday as he coughed up 7 runs on 2 hits and 4 walks while striking out 1. The righty fired just 20 of his 41 pitches for strikes in the contest. Ohtani's ERA jumped from 2.58 to 3.60 thanks to the rough outing, but that, perhaps more than anything, attests to just how well he had been pitching this season (in addition to mashing at the plate). And to be fair, he was overachieving a bit on the mound, as his xFIP sat at 3.33 prior to the start. So, there was a warning that the ERA could regress. After all, his BB/9 sat at 4.7 entering the contest and he had managed to strand 84% of baserunners despite a 16% HR/FB, thanks in part to a .266 BABIP. Opposing batters have made plenty of loud contact against him (45% hard-hit rate per Statcast), although many (46%) were of the liner variety. Ohtani will look to right the ship on the mound at home next week against Boston next week, but in the meantime his fantasy owners can look forward to him continuing to produce at the plate.

Steven Matz (SP-TOR) was activated from the IL after missing some time following a positive COVID test. The southpaw's return to action did not go well, as he lasted just 2.2 innings against the Mariners in which he allowed 4 runs on 5 hits and no walks while striking out 3. He tossed 32 of his 48 pitches for strikes and surrendered a homer in the outing. Through 14 starts (72.1 innings) on the year, the 30 year-old owns a 4.48 ERA, 9.7 K/9, and 2.6 BB/9. His 3.65 xFIP, however, indicates that he has run into some bad luck, namely a slightly high .338 BABIP and slightly low 72% strand rate. True, his HR/FB might also appear a touch high at 15%, but his career rate in that department is 17%. Opposing hitters make a fair amount of hard contact against Matz (39% per Statcast), but he does induce grounders at a healthy 46% rate. Given his peripherals, Matz should be a solid back-end or streamer option for fantasy rotations going forward. He lines up for an attractive start in Baltimore early next week.

Daniel Lynch (SP-KC) scuffled in his first few MLB starts earlier this season, compiling a 15.75 ERA, 7.9 K/9, and 5.6 BB/9 across 8 innings of work. The 24 year-old southpaw struggled with his control and was very hittable (77% contact rate), and opposing hitters blistered the baseball (59% hard-hit rate per Statcast). But Lynch's pedigree suggests that we should see a much better hurler in the future, as he was a first-round pick back in 2018 and was recently rated the #21 overall prospect in baseball and #2 in the Royals organization per MLB.com. Lynch, after all, had reached only High-A before the 2021 season, where he logged a 3.10 ERA (3.15 xFIP), 8.9 K/9, and 2.6 BB/9 across 15 starts (78.1 innings) in 2019, only his second season of professional baseball. So far in 2021, he's been fairly effective in Triple-A, as he owns a 4.24 ERA, 9.4 K/9, and 3.4 BB/9 through 7 starts and 1 relief appearance (40.1 innings). Armed with a plus heater that can sit at 95-97mph, an above-average mid-80s slider, a developing changeup, and an average curveball, scouts believe that Lynch has a high ceiling as a starter. So, fantasy owners should not dismiss him after his lackluster debut earlier this season.