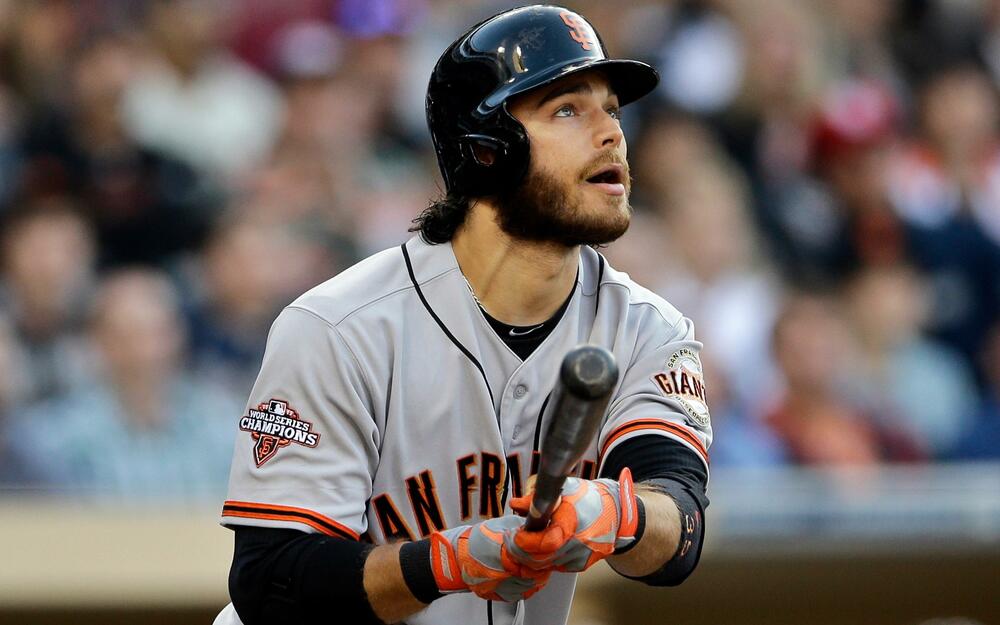 Brandon Crawford (SS - SF) - Crawford was 5-12 with 2 2Bs and a HR over the weekend against the Cubs, continuing his late-career resurgence. I firmly believe that most of this is legitimate, as the new coaching staff that came in prior to last season retooled his swing, and since then he's completely reversed the downward trends in exit velocity, launch angle, barrel%, and FB rate. He's posting his lowest chase and swing rates since 2014, which has of course led to the best walk rate of his career. More patient, more elevation, and harder contact.....definitely a prescription for success. Crawford has absolutely become a useful SS again, and while he's been much better on the road like almost all of the Giants, I wouldn't have a problem with him as my starting SS in most formats regardless...he's been the 6th best SS in standard 5x5 leagues so far this year.

Tommy Pham (OF - SD) - Pham reached base 3 more times on Monday and stole his 9th base of the year against the Cubs. A lot of folks gave up on Pham early this year with his horrible start, but the 33 year old has definitely turned it around over the last month or so. Since May 15th he's played in 22 games and hit 20-71 with 2 doubles, 2 triples, 4 homers, and 6 steals. He's also walked 19 times and struck out only 18 while posting 15 runs and 13 RBI. That's a slash line of 282/433/535. He still very much looks like a 20/20 threat, he chases less than almost anyone and doesn't swing and miss much, and the 90 mph exit velo suggests that he's actually been shorted a bit on the HR front. I still feel that he's a top-30 OF and a great acquisition target while his full year numbers still look relatively poor.

Jesse Winker (OF - CIN) - Winker was 8-20 with 4 HR in the 4-game set in St. Louis, and he's now hitting 350/412/665 with 17 HR for the season. I feel like this sort of breakout was easy to see in hindsight, as Winker has always been a great LD hitter with low K rates and high exit velocity. We've seen good batting averages and good power from him before, sometimes (his rookie year) at the same time. Over the past few seasons it's looked like he's working on trading a bit of that excellent contact ability for a bit more power, and then this year it's all come together with the contact coming back a bit and the power exploding through a higher FB rate and an exit velo that is 21st in MLB and relatively steady from last season. The age 27 "career year" doesn't happen all that often anymore, but this definitely looks like one from Winker, and aside from a bit of expected BABIP regression nothing looks like it's out of place here.

German Marquez (SP - COL) - Since getting blown up for 8 runs in less than an inning on May 4th against the Giants, Marquez has rattled off QS in 5 of his last 6 outings, allowing no more than 1 run in any of the 5 despite 4 of the 6 starts being at home. He's been even better in his last 3 outings, throwing 19 innings and allowing just 9 hits and 3 runs with 4 walks and 19 K's. Clearly the abnormal control issues seem to be behind him now, something that he attributes to watching film and correcting the consistency in the tempo of his windup. His upcoming schedule is pretty neutral: Reds and Mariners away, Brewers and Pirates at home over the next 4 starts....I don't really see anything there that would frighten me. There are still a handful of starts that I would avoid with him, but for the most part I don't mind playing him even when he is at home....he's at that top-level of streaming SP for me, and likely a top-60 SP overall.

Pablo Lopez (SP - MIA) - The Marlins bumped up the value of Pablo Lopez's June considerably on Monday by pushing him back a day, enabling him to miss the Red Sox in Fenway in favor of a Tuesday start against the Rockies in the friendly confines of Marlins Park. Marlins Park is a great pitcher's park, but Lopez likes it even more than most do. This season his ERA is 0.98 at home vs. 5.04 on the road, and for his 4-year career the difference is 2.78 vs. 5.86. For a pitcher whose stats are overall as good as Lopez's, he is still very much a streamer for me due to the massive H/R splits. I'm hopeful that the Marlins have finally figured this out, and that they'll let him pitch the first and last games of this upcoming homestand, then give him an extra day of rest again for their road trip and let him do the same exact thing on their next homestand at the end of this month. It seems easy to do and could make Lopez one of June's most valuable SPs.