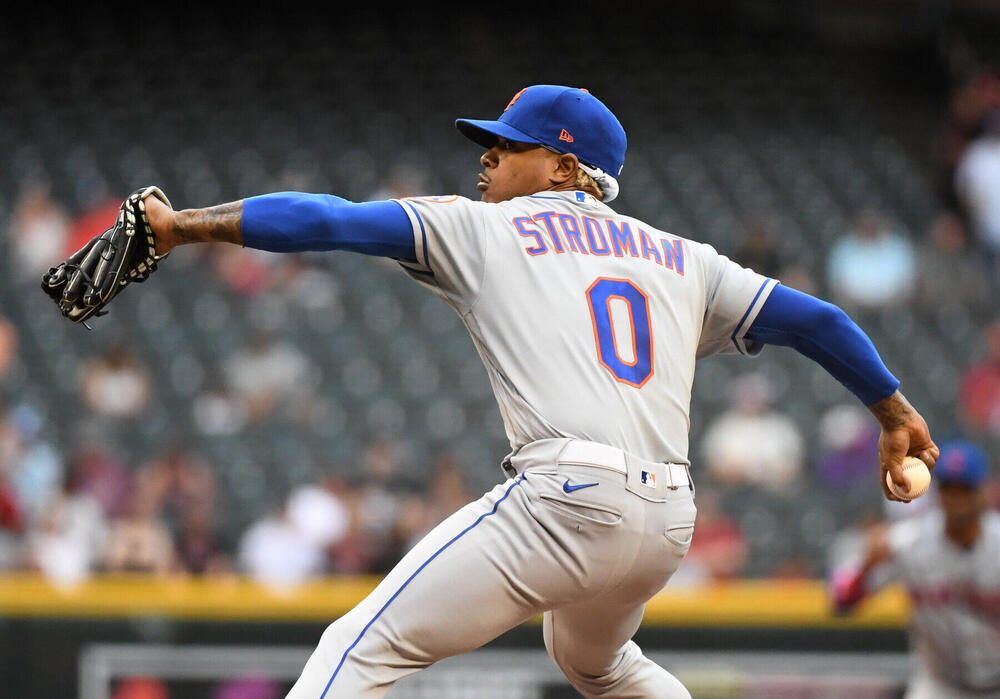 Marcus Stroman (SP-NYM) earned the W against the Padres as he allowed just 1 run on 6 hits and a walk while recording 8 punchouts over 6.1 innings of work. He threw 57 of his 85 pitches for strikes and gave up a homer in the outing. The 30 year-old sinkerballer now owns a 2.32 ERA, 7.8 K/9, and a 2.1 BB/9 through 77.2 innings of work (14 starts) on the year. Stroman is outperforming his peripherals, as his 3.32 xFIP points to a .267 BABIP (.305 career) and 80% strand rate (72% career) helping his ERA. While he has allowed hard contact at a concerning 43% clip per Statcast, he's helped himself out by inducing groundballs at a 54% rate. Encouragingly, his 12% swinging-strike rate is the highest he has posted in this career, and his walk rate is on pace to be his best since 2015. So, there are certainly signs that the ERA should climb a bit going forward, but there are also some positive things going on under the hood. Stroman lines up for a start at home against the Cubs next week.

Erick Fedde (SP-WSH) returned from the IL (COVID-19) to start the first half of Saturday's doubleheader with the Giants. He stymied the Giants over 5 scoreless innings to pick up the win as he scattered 4 hits, walked none, and racked up 7 punchouts. He threw 51 of his 82 offerings for strikes in the outing. The 28 year-old righty has been surprisingly decent in 2021, as he now owns a 3.86 ERA, 8.7 K/9, and 3.7 BB/9 across 9 starts (44.1 innings). His 3.99 xFIP indicates that he's been about as effective as his ERA suggests. Although his strikeout rate is pretty mediocre and his 7% swinging-strike rate is certainly nothing to write home about, Fedde has induced grounders at a healthy 50% clip and Statcast indicates that he's kept the hard contact under 36%. He could be a useful back-end option for fantasy purposes, but it's worth noting that he rarely pitches more than 5 innings into games (just twice so far this season). Fedde lines up for a turn at home against the Mets next week.

Kevin Gausman (SP-SF) tossed just 4 innings against the Nationals in the first half of Saturday's doubleheader as he gave up 2 runs on 4 hits and a pair of walks while fanning 4. The 30 year-old righty threw 40 of his 64 pitches for strikes and surrendered a longball in the outing. It was a rare unimpressive outing for Gausman in 2021, as he now owns a 1.43 ERA, 10.7 K/9, and 2 BB/9 across 13 starts (81.2 innings); the loss was his first of the year. His 3.06 xFIP does suggest that the ERA should further regress going forward, as a .213 BABIP (.307 career) and 88% strand rate (75% career) are likely unsustainable. Gausman's 16% swinging-strike rate is, however, a career-best and opposing hitters have recorded a career-low 69% contact rate against him while he has managed to keep the hard contact under the 38% mark (per Statcast). So, if you own him in fantasy don't sweat this recent meh outing. He's been really good in 2021 and should continue to be - although the advanced metrics do indicate that his ERA should creep upward. He lines up for a start at home against Arizona next week.

Zach Thompson (SP-MIA) threw 5 scoreless innings against the Braves on Saturday afternoon, scattering 3 hits and walking none while fanning 6. He threw 45 of his 66 offerings for strikes in the outing. The 27 year-old rookie has now made 2 starts in the majors in 2021 and owns a 2.25 ERA, 7.9 K/9, and 1.1 BB/9 across 8 IP. He was pulled from his first start after just 3 innings for precautionary reasons and appeared to be at full strength on Saturday. Thompson is an older rookie who was a starter in 2014-2017 before transitioning to a relief role in 2017 - his 2 starts with the Marlins this year are his first since that time. He was not a highly regarded prospect entering the 2021 season, with below-average command, an average heater, a plus slider, and a below-average curve. But he's found success so far in the majors and so it will be interesting to see how he does if he remains in the rotation (which he has earned). If so, he should pick up a start on the road against the Cubs next week.

Tony Santillan (SP-CIN) is playing well in Triple-A to start the 2021 campaign, as he owns a 2.51 ERA, 12.5 K.9, and 3.3 BB/9 through 6 starts (32.1 innings) entering Saturday's action. The 24 year-old righty was a second-round pick back in 2015 who possesses three average-ish pitches (an average fastball that sits in the low-mid 90s, an above-average slider, and a slightly below-average changeup) to go with shaky command. After logging a 4.8 BB/9 across 21 Double-A starts (102. innings) back in 2021, he's reigned in the walks so far in 2021 while logging a personal-best strikeout rate. A 3.53 xFIP does point to a .261 BABIP and 89% strand rate suppressing his ERA a bit, but there is no doubting that Santillan is in the midst of putting together his strongest professional season yet, and at the minors' highest level no less. For that reason he is worth keeping an eye on in fantasy.