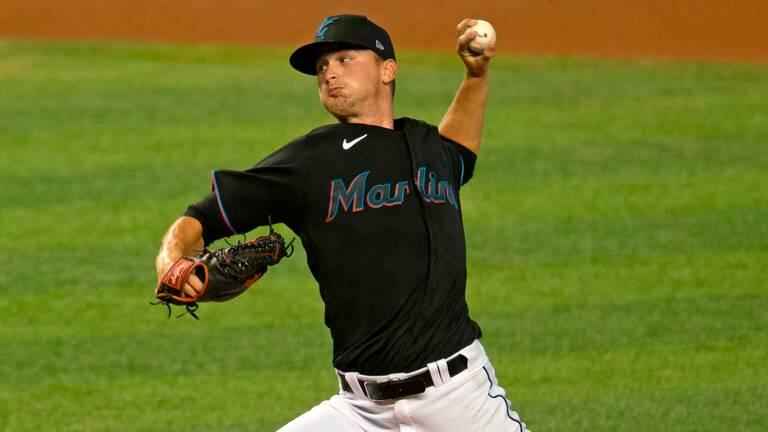 Braxton Garrett, Miami Marlins - Braxton Garrett dominated on Saturday with ten strikeouts and two runs allowed over seven innings against the Padres. Garrett posted an elite 44% CSW and he had an outstanding mix of pitches with five pitches registering over 14% usage, and his four seam fastball was the least used offering at that 14% mark. This is an enormous shift in how he had pitched in his first handful of appearances this year with the breakdown looking like this: Prior outings FB: 41%, SL: 29%, CB: 17%, CH: 6% and Sinker: 6%. This start though had the mix looking like this: Sinker: 25%, CB: 24%, CH: 21%. SL: 16%, FB: 14%. That's uprooting and completely throwing out the old mix and installing a whole new mix. I'm curious to watch this going forward.

Drew Smyly, Atlanta Braves - Drew Smyly left Saturday's start after four innings with knee pain, but the early word from the team sounds optimistic about the injury. Brian Snitker said after the game that Smyly wasn't in any pain and that he could make his next start. Before leaving, Smyly tossed four shutout innings against the Phillies and struck out three batters with three hits allowed. Smyly struggled in the first month of the season with a 8.05 ERA, then he posted a 4.24 ERA in May, and now has two straight months of a sub-3.00 ERA for Atlanta. He's been one of just a few Braves' arms that's been able to stick in the rotation and pitch well, so it's huge for the Braves if he's able to avoid anything serious.

Merrill Kelly, Arizona Diamondbacks - Merrill Kelly allowed two runs over six innings while striking out six. Kelly had a slightly-below league average 27% CSW but did get a decent amount of whiffs on his changeup (33%) in the start. Kelly's ERA is down for the third straight month, and this is the first month he's posted with a ERA under 4.00. There still isn't much here in the way of strikeouts but there's something useful for an arm that can work deeper into games and provide solid ERA totals.

Bryce Harper, Washington Nationals - Bryce Harper has been running wild on the Braves this series with three stolen bases on Friday and another steal on Saturday. That pushing his total to 12 for the season to pair with his 15 homers and a .287/.390/.520 slash line. Don't let the weird lack of RBI (35) worry you, Harper has been elite this year with his power, speed, and average and he's scored 51 runs with top of the line batted ball stats. I'm all on board with trying to acquire him in leagues.

Juan Soto, Washington Nationals - Juan Soto made a joke after the All-Star Break that maybe the homerun derby would help fix his swing, where most people worry about the derby breaking their swing. Soto might have been right... He homered again on Saturday and that gives him six since the All-Star break and for the month of July as a whole he's hitting .364/.488/.758. He was one of the easiest buys in all of baseball if an owner was shaky with his lack of usual Soto production in the first half as all of his batted ball metrics have looked great for the course of the entire year.