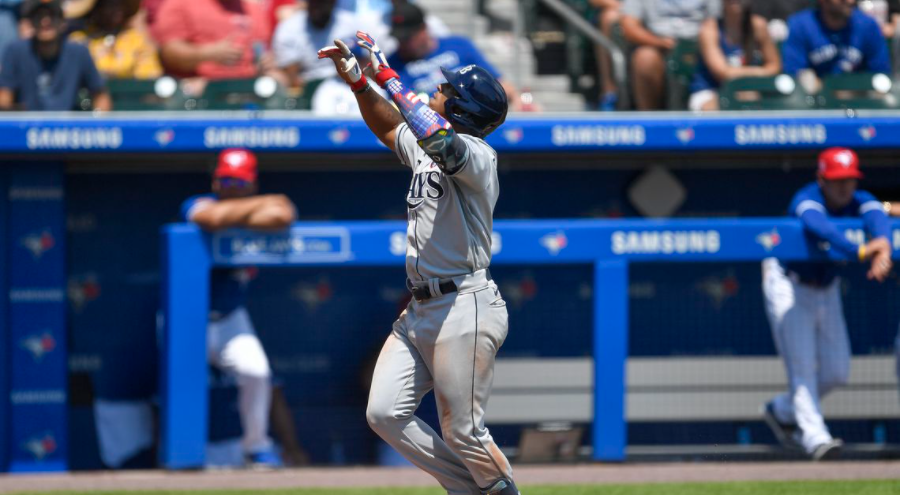 Wander Franco, Tampa Bay Rays - It's been a slow start to Wander Franco's major league career, but a 2-4 effort Sunday pushed his current hitting streak to four games. He also homered for the first time since his major league debut. While the production hasn't quite been there, there's still a lot to like with Franco's approach at the plate. He's running a sub-20% K%, 11.4% BB%, and a 45% hard-hit rate. His 29% line-drive rate is also extremely impressive. This isn't a similar situation to Jarred Kelenic where there was some significant issue under the hood that showed some red flags, Franco is showing that he's here to stay.

Jose Abreu, Chicago White Sox - Jose Abreu tallied his second straight multi-hit effort on Sunday, going 3-5 at the plate with his 14th homer of the season. Abreu has seen a sharp step back following his MVP season with a .250/.330/.447 slash line. He's hitting the ball on the ground significantly higher than any prior season, 52%, so despite running similar batted ball exit velocity data to last year. His line-drive rate has plummeted from 31% last season to just 17.9% this year, a huge influence on his expected batting average being as low as it is right now. Oddly enough, June was his lowest GB% of the year and he hit just .179 for the month due to a spike to a 9.2% pop-up rate.

Austin Meadows, Tampa Bay Rays - Austin Meadows doubled three times while going 3-4 at the plate. While he still isn't hitting as he did in his 2019 season, he's slashing .242/.331/.491 over 335 plate appearances with 16 homeruns. He's on pace to match the HR total he posted in that breakout season, but his stolen base production has dropped off dramatically. He's hitting flyballs at the highest rate of his career which could explain why his power numbers are solid, but his average is much further behind that 2019 season. In '19 his line drive rate was nearly 28% and this season he's just under 24%, and his flyball rate that year with 29.6% compared to 40% in 2021.

Kenta Maeda, Minnesota Twins - Bouncing back from an awful start, Kenta Maeda dominated the Royals with six shutout innings and a season-high 10 strikeouts. Maeda's season continues to be up and down and he's looking right now like an arm you throw out there against sub-par lineups, but then still bench during matchups with good teams. The last solid start against a good offense probably was May 11th against the White Sox where he allowed three runs over five innings. It's weird having Maeda as a streaming option but this is just where we are at with him.

Max Kepler, Minnesota Twins - Max Kepler hit his seventh homer while going 1-4 at the plate. Kepler's .201/.295/.402 slash line is pretty awful, but he's among the biggest underperformers in terms of batted ball data. He's running a career-high 46% hard-hit rate and has a .248 xBA. His strikeout rate is up by a few percentage points, but it's still only at 22% while having a walk rate over 10% for the fourth straight season. Based on that batted-ball data I'm intrigued enough about Kepler to look at buying low in redraft leagues.