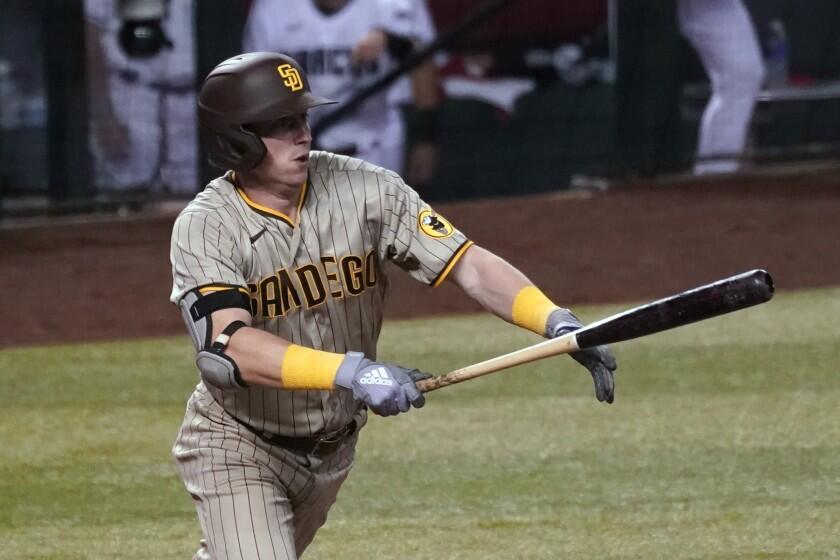 Cronenworth hit for the Cycle Friday going 4-5 for in the Padres slugfest. The first time All Star has followed up last years breakout season with another strong effort, as the game raised his season line to .284/.356/.481 as he has provided a little bit of everything with 21 doubles, 3 triples and 13 HR while seeing time at 1B, 2B and SS this year for the Padres. Cronenworths power surges have come in bunches and is was barely hitting above .200 for the month of July, so this may kick start him. While he has been a bit of a streaky hitter this year the overall numbers speak for themselves and in addition to spraying the ball all over the field he has a great eye at the plate with a 8% walk rate and low 14% K rate.

Soto went 4-5 with a pair of HR Friday Night. Soto had a disappointing season prior to the All Star Break by all accounts as his .885 OPS is considered a "struggling" mark by many. The struggles of the OPS have mostly been to him not hitting for as much power as we are accustomed to as a .445 SLG% and .162 ISO are nowhere close to what we expect. Luckily he has posted another massive OBP thanks to a league leading 58 walks and has an otherworldly 99 walks vs 80 strikeouts over the past 2 seasons. Perhaps the HR Derby was just what he needed to get his power stroke back.

Garcia went 1-5 with a HR Friday. Garcia has been the big power threat for the Brewers as his HR was his 17th of the season and raised his overall line to .255/.317/.469. Garcia has always had promise but never quite lived up to it outside of a 2017 All Star Season where he hit .330. His average is roughly in line with his career mark but he has a career high 48% hard hit rate and .207 ISO - and is getting pretty close to surpassing his career high of 20 HR he set back in 2019. If Garcia is available in your league he is a solid pickup with 30-HR power and even you are worried about a lowish .248 batting average vs righties he still has an above average .735 OPS, but has really mashed lefties to the tune of a .951 OPS over 71 PAs.

Marte went a combined 4-7 with 2 doubles and a HR across both games of the Marlins DH Friday. While injuries have kept him to playing just 54 games this year, Marte has produced a solid .283/.389/.444 line and has swiped 17 bags in 19 tries. A .338 babip has assisted, but Marte is a career .286 hitter so this is expected for him to have this kind of production. The most interesting thing about this season is Marte is walking at 12% - an amazing number for him considering his career mark is just 5%. This has fueled his career high OBP and continues to make him an attractive trade candidate as the Marlins continue to fade.

Harper went 1-3 during Game 1 the Phillies DH Friday and sat in Game 2. Harper only managed 68 games during the first half due to a variety of injuries but slashed a solid .278/.375/.516 with 15 HR, 34 RBIs and was 7 for 7 stealing bases. Harper may not be putting up numbers to qualify as one of the elite hitter, in the league, but he is still a very good player and contributes in every major category. Harper posted a career best 20% walk rate and career low 17% K rate in the 2020 shortened season and while those numbers have flipped a bit this year (12% BB, 24% K) they still line up nicely with his slash line. Hopefully a week off gets him back on track as the Phillies need a good second half from him.