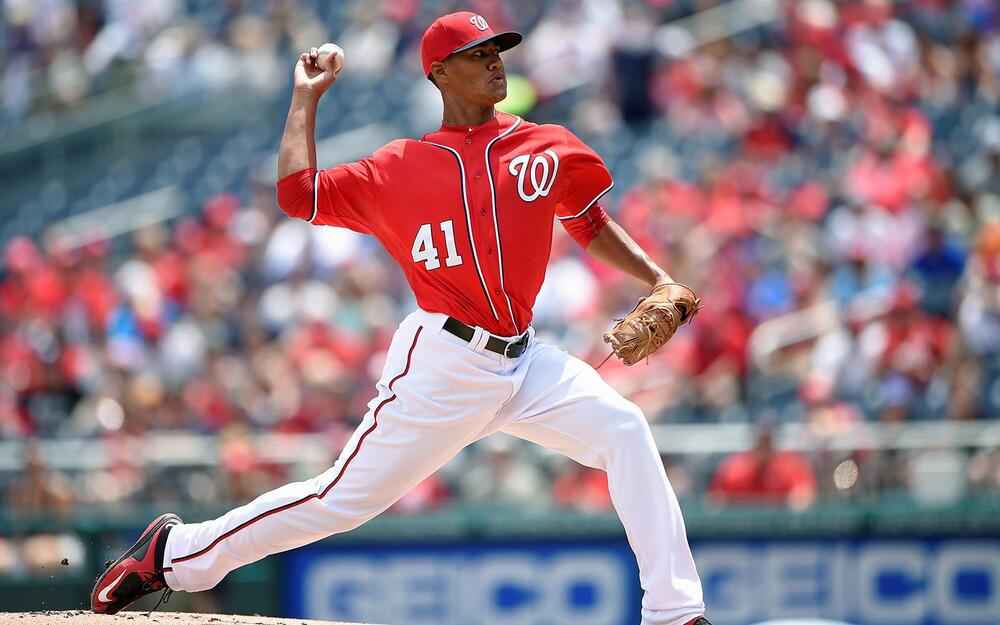 Joe Ross went 6.2 IP and gave up 3 ER on 7 H, 0 BB, and 11 K's against the Dodgers. Ross now has a 4.02 ERA and 1.20 WHIP through 16 starts. The skills have upticked this year with an increased strikeout rate (24% K) which has been backed up by more swinging strikes (11% SwStr) and called strikes plus whiffs (29% CSW). He is doing this with good control (8% BB) and his ERA estimators (4.20 SIERA) agree with the majority of what he has done. The increase in strikeouts has come as a result of more sliders. He has always had a slider but has changed the shape of it to get more horizontal break. This has made it more of a true out pitch that he's able to use to get strikeouts. Ross has made the necessary changes to become a viable fantasy starter and while he has struggled with staying healthy, you just have to ride him out for as long as he can go this year.

Kyle Hendricks went 6 IP and gave up 1 ER on 5 H, 0 BB, and 5 K's against the Reds. Through 17 GS, Hendricks has a 3.83 ERA and 1.25 WHIP. The ERA is not out of line with what one expected coming into the year given his lack of strikeouts (19% K) but the WHIP has not been there considering he came into the year with a 1.06 WHIP over his last three seasons. It can't be explained because of BABIP (.285 vs. career .278 BABIP). The real culprit is that Hendricks relies heavily on command and it just wasn't there to begin the year. This is why he is giving up a career-high 37% hard contact. The good news is that Hendricks was dominant in May (2.67 ERA) and June (2.97 ERA) which should give fantasy managers solace heading into the second half of the year. Hendricks should slowly bring down the WHIP so that he has an above-average ERA and WHIP at the end of the year.

Wade Miley went 6.2 IP and gave up 2 ER on 10 H, 1 BB, and 3 K's against the Cubs. Miley has a 3.06 ERA and 1.15 WHIP through 15 starts. He has been an excellent value for fantasy managers that picked him off waivers after his disastrous 2020 season (5.65 ERA and 1.67 WHIP). Miley has been able to miss more bats (21% K) while maintaining above-average control (7% BB). He makes his lower strikeout rate play by getting 53% GB. His ability to get ground balls also helps him keep the ball in the yard (0.61 HR/9) which is an extremely important skill when pitching half of your games at Great American Ballpark. The ERA is likely going to regress but even if it moves towards his SIERA (4.00), Miley will still be a useful back end of the rotation starter. He gets the Brewers on the road which is not an ideal start given the ballpark and their right-handed heavy lineup.

Joey Votto was 1-4 against the Cubs. Votto came into the game red hot hitting .360 with 3 HR over the past seven games. On the year, Votto is hitting .258 with 11 HR, 24 R, 37 RBI, and 1 SB. The batting average isn't vintage Votto but in today's environment, it is not going to kill you. His plate skills remain above-average (23% K and 10% BB). He has traded some of his walk rate to be more aggressive with an emphasis on hard contact and that has seemed to pay off (49% Hard and 14% Barrels). It's hard to ignore that Votto isn't the same player that he once was but from a fantasy perspective, he is still valuable in mixed league formats as a 1B or CI.