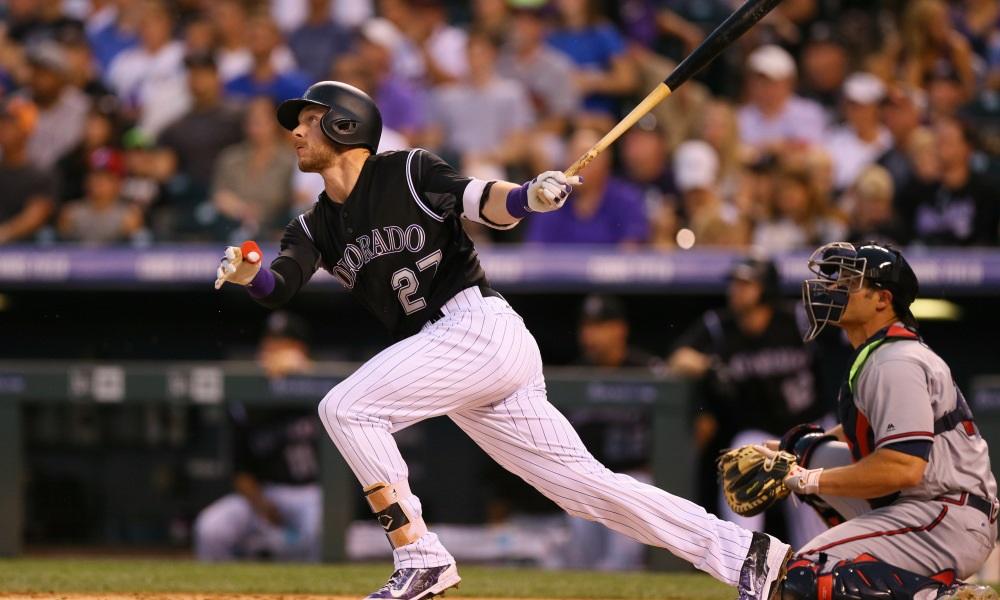 Story showed up on Monday with two home runs and three RBIs in four plate appearances. Maybe the first round fantasy pick can reward his owners with a late-season surge. After going hitless in five straight starts, Story has four hits, including three extra-base hits, in his last two games. It's hard to know what to make of his miserable season. We try to parse through the numbers and there are a few that signal decline, but the reality is there are certain notes of context the numbers can't explain: losing Arenado's protection, the mental drain of assuming he's getting traded and ultimately not getting dealt and the complete disaster of a performance by the players around him. Those are very real explanations for Story's regressive plate discipline and diminished line-drive rate and enhanced chase rate, among other indicators. Where he's playing matters, but there is a good possibility of a strong bounceback in 2022 and perhaps even late here in 2021.

Goldschmidt continued his strong August with his 22nd home run of the season. He also walked, which raised his OPS to .833 and he is now hitting .286 with a .195 ISO. Goldschmidt's two batted balls on Monday (the home run and a 344-foot flyout) were both hit over 98 miles per hour, continuing a trend of high exit velocity for the big first baseman. In fact, Goldschmidt is on pace for his highest average exit velocity and second-highest barrel rate, yet he is heading towards one of the lowest ISO's of his career. That reflects the move to St. Louis as his HR/FB rates in pre-humidor Arizona were consistently between 20-25 percent, but this year it is dragging in the low-teens. The truth is Goldschmidt is generally the same player he was with the Diamondbacks, but his power production is lacking due to the change in home ballpark. Furthermore, he is less patient because he has more power surrounding him in the lineup so his traditionally high walk rate is sub-10% for the first time. Goldschmidt is still a very good hitter, and his 22 homers and 10 stolen bases with 79 RBIs are great fantasy numbers for a first baseman that remains among the top-10 in the majors.

The Nationals called up Ruiz and started him at catcher on Monday. Ruiz was arguably the top asset acquired by the Nats in the Max Scherzer/Trea Turner trade. Ruiz hit the ball in the air four times in four at-bats (three popups and one lineout). One of those popups landed for a bloop hit in center field for Ruiz's first hit as a National. Putting the ball in play is something he does very well, and hitting the ball in the air has been a development that has really changed his profile over the last two seasons. In the past, Ruiz was more of a line drive/ground ball hitter, but he has tinkered with his launch angle and become a flyball hitter. That has predictably led to more home runs, and it has not negatively impacted Ruiz's contact. Neither has his move to the Nationals organization, where he's hit just as well as he did in the Dodgers system. Now the test over the final month of the season is whether he can translate his success at AAA into success at the major league level. In all likelihood, Ruiz will be Washington's number one catcher in 2022, but whether he should be fantasy owners' top backstop depends on his ability to make good contact while flashing moderate power.

Belt scored the Giants' only run on Monday, picking up two of four hits allowed by Corbin Burnes. He is only one home run from 20, a threshold he has never surpassed. He is also on pace to eclipse a .300 ISO for the first time in his career. Last year Belt seemingly realized he's a left-handed first baseman and he should hit better. He became more aggressive and his bat speed improved. That transitioned into the highest strikeout rate of his career this season but also a higher exit velocity and barrel rate, which explains why the two highest HR/FB rates of his career have come in the last two seasons. He is hitting a ton of fly balls, but a 25% HR/FB rate is leading to a solid number of home runs. It is worth pointing out Belt has struggled against fastballs this season, but he has crushed breaking balls, which were his Achilles heel in past seasons. I think that's a more significant development than his recent struggles against heaters because he's been able to hit fastballs throughout his career. Even at 33 years old, there is room for growth next year.

Alex Reyes was pulled from the closer role after a rough stretch of games in August, and Cardinals manager Mike Shildt said they would go with a closer-by-committee approach, but Gallegos got the opportunity on Monday and delivered with a perfect 9th inning through the heart of the Cincinnati offense, striking out Joey Votto in the process. Gallegos has closer experience, going 4-for-4 in save opportunities last year and his fastball/slider combination is quality enough to fit into the role. He hasn't allowed a lot of home runs, but he has the potential to as a 7% HR/FB rate softens the blow of a 46.4% flyball rate. Eventually the home runs could become problematic, but for now Gallegos is the most likely option in the 9th inning until and unless Reyes regains the spot. For that reason, he is worth an add in most fantasy formats where owners need saves or RP help.