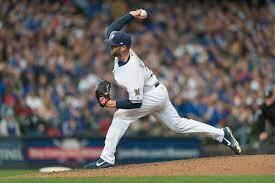 Houser did not allow a hit through 6.1 IP against the Pirates, although he did allow 1 ER and 5 BB's in the contest. He now owns a sparkling 1.91 ERA since the start of July with 17 hits allowed in 28.1 IP in that time frame, however his 20:16 K:BB across 28.1 IP during that stretch is quite poor. Houser's greatest asset is his 60.5% GB%, but his mediocre strikeout and walk rates limit him as a starting pitcher.

Cueto allowed 3 runs (2 ER) in 5 IP with 7 K's against the Dodgers on Tuesday. He's been very good since the all-star break posting a 2.61 ERA and 24:8 K:BB over 20.2 IP covering 4 starts. After back-to-back seasons with an ERA over 5.00, Cueto has had a bit of a resurgence this season, mostly thanks to a huge decrease in his BB rate, which has gone all the way down to 2.10 BB/9. Cueto isn't an amazing fantasy option due to his mediocre strikeout rate, but he is still a very good option at home where he owns a 3.09 ERA for the season.

Diaz went 3-4 with a HR, a double, and 4 RBI against the Cubs on Tuesday. Make that 10 HR's in 22 games for Diaz, who has suddenly become a big power source for the Rockies. He has also hit .316 during that stretch with an elite 13.6% K%. It is important to know though that Diaz' EV during this time is 84.3 which doesn't bode well for this hot streak to last long term.

Floro picked up his 4th save of the season against the Mets on Tuesday, and has now saved games on consecutive days for the Marlins. It appears he is the Marlins closer of choice at the moment, and that's reasonable considering his 2.64 ERA. However, his other numbers are far less shiny, including an 8.12 K/9, 3.65 BB/9, and 4.10 xFIP. That doesn't mean he won't succeed as the Marlins closer, but it does lower his overall value.