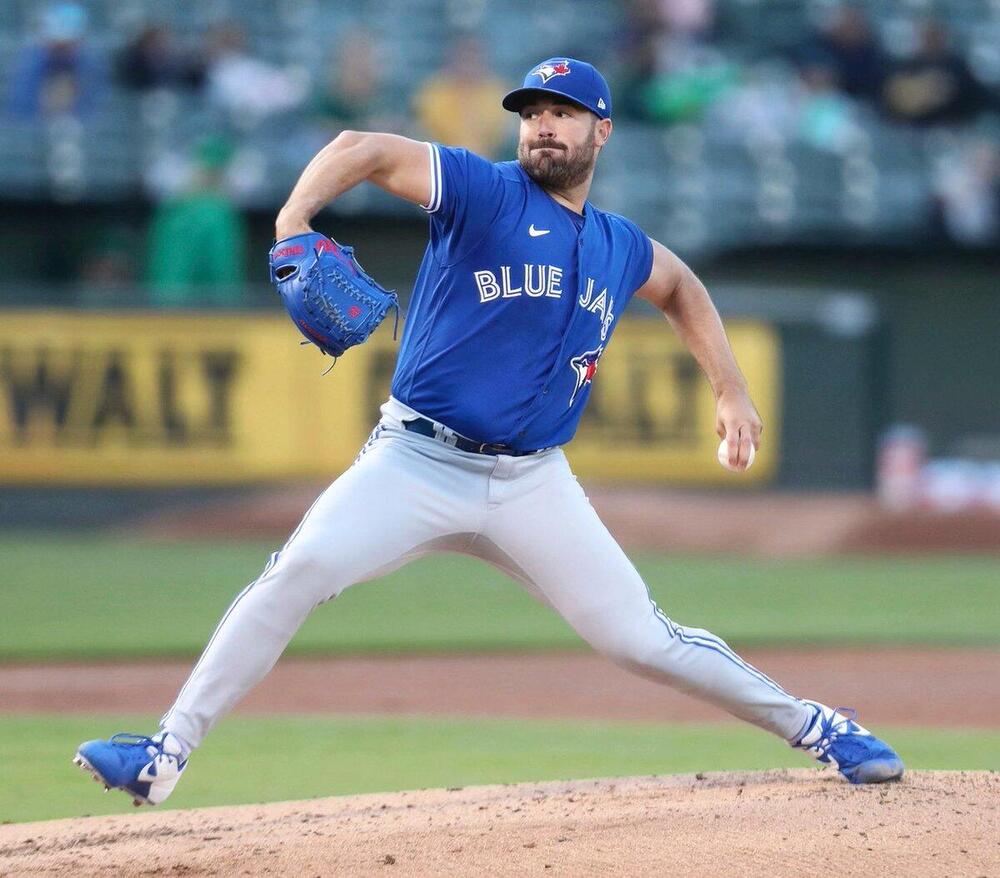 Robbie Ray (SP-TOR) defeated Baltimore on Monday evening as he allowed 2 runs on 4 hits and a walk while racking up 10 punchouts. The 29 year-old southpaw fired 62 of his 97 pitches for strikes and surrendered a homer in the contest. Ray has simply reinvented himself in 2021 and now owns a 2.71 ERA, 11.4 K/9, and 2.2 BB/9 through 26 starts (159.1 innings of work). His 3.21 xFIP suggests that the gains are largely real, although an 89% strand rate (76% career) and .268 BABIP (.307 career) are suppressing his ERA a bit. But there is no doubting that Ray has made a major improvement in the control department, as his walk rate is easily a career low, coming in well below his previous best of 3.45 back in 2015 (and well under the 7.8 that he logged over 51.2 innings last season). Perhaps most impressively, Ray has raised his average fastball velocity in the process to 95mph, the highest it has been since 2016. Combine the vastly improved control with elite strikeout ability (fueled by a career-best 15% swinging-strike rate) and we have a tremendous fantasy asset that seems poised to repeat his good work in 2022. For now, though, Ray should make his next start at home against Oakland this weekend.

Casey Mize (SP-DET) earned a quality start against the Twins on Monday as he allowed 3 runs on 5 hits and a walk while fanning 4 over 6 innings of work. The 24 year-old rookie threw 51 of his 79 offerings for strikes for outings and gave up a longball in the outing. Mize has been effective although not exactly impressive in 2021, as he now owns a 3.59 ERA, 6.9 K/9, and 2.6 BB/9 across 25 starts (135.1 innings). His 4.41 xFIP points to a .251 BABIP and 82% strand rate suppressing his ERA, although he's also logged an 18% HR/FB so the luck has not all been good. Mize has recorded a swinging-strike rate of just 9% while opposing hitters have made hard contact against him to the tune of a 40% clip per Statcast. Fortunately for Mize, exactly half of the batted balls he has allowed have been worm-burners, so that has helped to induce double-plays and minimize damage. There's not a ton to love about Mize going forward in 2021 given his xFIP and the fact that the Tigers will be careful to not overwork him, but overall it's been a solid campaign for him. The key to his fantasy value will, of course, be whether he can kick up the K rate next season. He currently lines up for a turn in Cincinnati on Sunday, but keep an eye on the schedule in case Detroit decides to manage his workload by pushing him back in the rotation.

Gleyber Torres (SS-NYY) is expected to return from the IL on Friday. The 24 year-old has been sidelined since August 8th because of a sprained thumb but now appears set to return to MLB action provided he does not suffer a setback during his next couple minor-league rehab appearances. It has not been a great year for Torres at the dish, as evidenced by his 91 wRC+. Through 407 plate appearances, he is hitting .253 with just 6 dingers, 42 RBI, and 12 stolen bases. Never one to post a high hard-hit rate, that figure sits at 37% per Statcast this season, which has to a degree squandered his career-high 76% contact rate. There certainly has to be an element of luck involved in the power outage here, as his 6% HR/FB is a career-low. But it is worth noting that, after that figure sat at 18% in 2018 and 22% in 2019, it was just 7% in 2020. It also doesn't helped that his flyball rate has dipped each year he's been in the majors, from 43% in 2018 to 42% in 2019 to 39% in 2020 to under 37% this season. There's hope that he rebounds based on his past production, but the trends of the last two years are concerning.

Cole Irvin (SP-OAK) threw a bullpen session over the weekend and appears set to make his next schedule start, against Detroit on Tuesday. The 27 year-old southpaw departed his start last Tuesday early because of hip discomfort but the issue has apparently subsided over the last few days. Despite his lack of strikeout skills (6.1 K/9), Irvin has pleasantly surprised in 2021, logging a 3.68 ERA, largely thanks to strong control (1.9 BB/9) and some luck (4.90 xFIP). A key to Irvin's success has been combining that control with keeping the longball in check (0.75 HR/9 and 7% HR/FB), as he misses few bats (swinging-strike rate under 9%) and opposing hitters make plenty of contact against him (83%). Hitters have logged a decent 39% hard-hit rate against Irvin per Statcast, and a lot of the batted balls have been liners (25%) and flyballs (39%). It helps his case that he pitches in the spacious RingCentral Coliseum, but one has to think that there should be some correction to the mean at some point - if not in 2021, then in 2022. But for now one does have to like a start against the Tigers.

Julio Rodriguez (OF-SEA) has held his own in his first taste of the upper minors in 2021, as he is hitting .330 with 4 homers, 12 RBI, 17 runs scored, and 8 stolen bases across 124 Double-A plate appearances. The #2 overall prospect in all of baseball per MLB Pipeline has commanded the dish well, drawing walks at a 17% clip while fanning just under 19% of the time. This represents a continuation of his strong work in High-A prior to his promotion, as he hit .325 with 6 dingers, 21 RBI, 29 runs scored, and 5 steals over 134 plate appearances at that level. The 20 year-old has shown more patience at the plate in Double-A (10% walk rate in High-A) while fanning a bit less at the higher level as well (22% strikeout rate in High-A). If there is any reason for concern, it's because of the lack of power output, largely because he has not hit many flyballs (23% in High-A and 25% in Double-A). The tools are undeniable, but he may have to tweak things in order to tap into his full power potential, which grades as well above average. Fantasy owners should be watching for him to get the call as early as 2022.